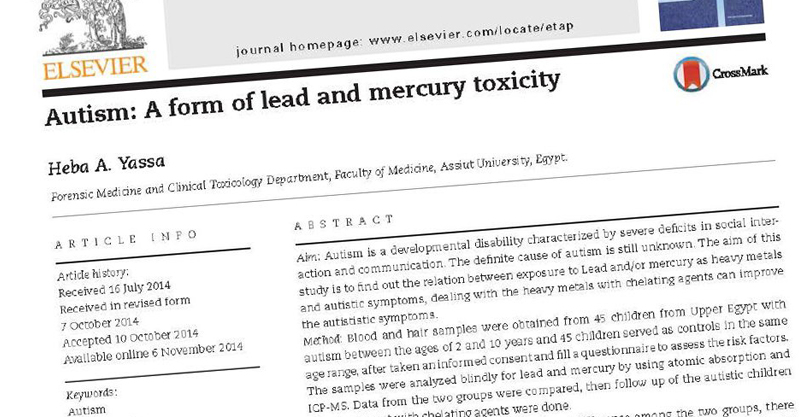 Lead is a dense toxic heavy metal found in pipes, batteries, coal ash, paint products, and gasoline. Its neurotoxicity was recognized in the late 19th century, as it accumulates in soft tissues and bones in humans, damaging the nervous system and interfering with enzyme function. Even though lead was supposed to fazed out, it is still found in the air, soil, and water, and traces of lead continue to be found in industrial and construction products. Populations are still affected by environmental exposure. Lead is especially toxic to children, as evidenced in the following studies and articles below, contributing to gastrointestinal problems, psychological issues, acute encephalopathy, and lower IQ, as well as contributing to neurological disorders such as autism, ADHD, and behavioral problems.

This study reported that “Several components of coal ash, such as heavy metals like lead, mercury, and arsenic, may be associated with health and sleep problems in children.” Children living near coal ash had a significantly greater prevalence of attention deficit hyperactivity disorder, gastrointestinal problems, difficulty falling asleep, frequent night awakenings, teeth grinding and leg cramps.

Assessment of Hair Aluminum, Lead, and Mercury in a Sample of Autistic Egyptian Children: Environmental Risk Factors of Heavy Metals in Autism

This study found that levels of mercury, lead, and aluminum in the hair of autistic children were higher than in the hair of controls. “Environmental exposure to these toxic heavy metals, at key times in development, may play a causal role in autism.”

This study calls attention to problems associated with low levels of background exposure to lead and mercury.

A review of reports collected from close to 50,000 water companies and utilities nationwide found over 250 tap water contaminants and identified studies linking many of these chemicals to cancer; brain and nervous system damage; fetal toxicity; impaired fertility; and hormone disruption.

Mercury and Lead: The Fallacy of “Safe” Levels

In our toxin-filled world, we often look to government agencies to tell us what levels of exposure we should consider safe or unsafe. If our exposure does not exceed an agency-determined threshold, we assume there is little cause for concern. How do regulatory agencies determine these thresholds? There is considerable evidence to suggest that safety limits are often arbitrary and do not accurately flag risks.