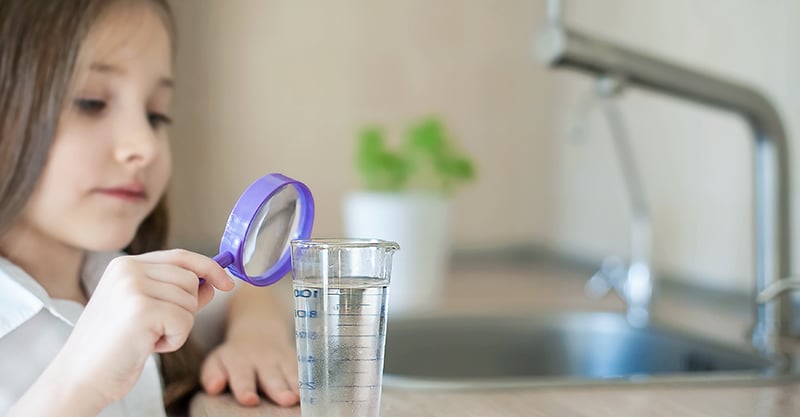 Hollywood seems to love a good David versus corporate Goliath tale, and the stories it brings to the silver screen not infrequently revolve around real-life contamination of community water. Twenty years ago, the film Erin Brockovich called attention to a cancer-causing chemical dumped in a California community by Pacific Gas & Electric, while the recent film Dark Waters focuses on DuPont’s contamination of a West Virginia town’s water with the chemical PFOA (perfluorooctanoic acid). Outside of Tinseltown, occurrences such as the 2014 lead debacle in Flint, Michigan—and especially its dramatic impact on children’s cognition and behavior—have helped ensure that water-quality-related incidents continue to get occasional media attention.

PFOA belongs to a wider family of chemicals called PFAS (per- and polyfluoroalkyl substances). The scientific evidence clearly indicates that drinking water contaminants such as PFAS, lead and many others—as well as the fluoride that, incredibly, is intentionally added to drinking water—are not doing anyone any good. However, these exposures are of particular concern for children. This is because growing children drink more water than adults (per pound of body weight) and are exquisitely vulnerable to adverse developmental effects. As the Environmental Working Group (EWG) points out, “A baby fed exclusively powdered formula mixed with tap water drinks the most water for its small size of any age group”; in this scenario, tap water may represent up to 85% of a formula-fed baby’s diet.

Water systems in many of the nation’s largest cities routinely violate Environmental Protection Agency (EPA) safety standards for drinking water. This observation was confirmed in a comprehensive EWG review of reports collected from close to 50,000 water companies and utilities nationwide (2010-2015), which found over 250 tap water contaminants and identified studies linking many of these chemicals to cancer; brain and nervous system damage; fetal toxicity; impaired fertility; and hormone disruption. EWG concluded that millions of American children are exposed to unsafe levels of contaminants in municipal water supplies (with an unknown number of children exposed via unmonitored private wells)—and in this context, even “a passing grade from the federal government” means little.

… the chemicals’ extremely durable and water-soluble properties have facilitated widespread PFAS infiltration of community water supplies and private wells around the world, even in the most remote areas.

PFAS, extensively used in manufacturing and consumer products, are one of the more well-documented and worrisome drinking water contaminants. Environmental groups have dubbed PFAS “forever chemicals” because they resist degradation and build up in the blood and organs. Although other routes of exposure (such as food, house dust and indoor air) are also significant, the chemicals’ “extremely durable” and water-soluble properties have facilitated widespread PFAS infiltration of community water supplies and private wells around the world, even in the most remote areas. In the U.S., PFAS levels in tap water have increased significantly since the late 1980s.

Research shows that virtually everyone on the planet now harbors PFAS in their bloodstream. One nationally representative U.S. study detected the compounds in the blood of 99% of American adults and adolescents age 12 and up. Although some countries have banned or begun to phase out certain PFAS compounds, the chemicals’ propensity to bioaccumulate—and the continued or increased use of other PFAS compounds—means that the PFAS body burden remains high.

For children, the implications of PFAS exposure are profound, with a wide range of potential effects that may begin in utero and continue into adulthood. Possible adverse outcomes include:

[A] USA Today analysis of EPA data found that the agency had detected lead levels in excess of EPA standards in almost 2,000 community water systems from all 50 states, with over a third displaying levels more than double the EPA’s action level limit …

Lead is another persistent substance that lingers without breaking down. Although the U.S. banned lead-based paints in the late 1970s and leaded gasoline in the mid-1990s, lead components of water delivery systems continue to constitute an environmental and health disaster. Government toxicologists describe lead as a “systemic toxicant affecting virtually every organ system,” and especially the developing brain. There is no safe threshold for lead exposure.

In 2016, a USA Today analysis of EPA data found that the agency had detected lead levels in excess of EPA standards in almost 2,000 community water systems from all 50 states, with over a third displaying levels “more than double the EPA’s action level limit” and many rivaling or exceeding the alarming levels detected in Flint, Michigan. Some of the highest lead levels were at schools and day care centers—in one elementary school, the “stunning” level of lead in the water met the EPA’s threshold for hazardous waste. Moreover, drinking water contamination with brain-damaging lead had often persisted for months or years without redress, and almost one in ten water systems had never notified the public.

Among its many dangerous properties, lead can pass through the blood-brain barrier and cause damage to various regions of the brain linked to neurologic disorders. In the aftermath of the lead poisoning of Flint’s water supply, the city observed a decline in reading proficiency in exposed children, and the proportion of students qualifying for special education services nearly doubled. A veteran teacher in the Flint school system stated, “We have a school district where all that’s left are damaged kids who are being exposed to other damaged kids, and it’s causing more damage,” while a Flint superintendent reported that the schools “were bracing for an ‘evolving, educational emergency.’” Even more concerning, a Reuters analysis later showed that Flint is far from being one of the nation’s most dangerous “lead hotspots”; Reuters found “nearly 3,000 areas with recently recorded lead poisoning rates at least double those in Flint during the peak of that city’s contamination crisis,” with blood lead levels at least four times higher than Flint’s in more than a third of those communities.

This CDC-endorsed practice has persisted for decades despite an avalanche of evidence that the chemical—an industrial waste product—is lowering IQ and that fluoride produces neurodevelopmental toxicity comparable to the effects of lead.

Fluoride stands apart from other water contaminants in that water systems add it to drinking water on purpose. More Americans drink fluoridated water than in all other countries combined. This CDC-endorsed practice has persisted for decades despite an avalanche of evidence that the chemical—an industrial waste product—is lowering IQ and that fluoride produces neurodevelopmental toxicity “comparable to the effects of lead.” In addition to effects on cognition, studies have linked fluoride to behavioral symptoms of inattention and diagnosed attention-deficit/hyperactivity disorder (ADHD) as well as to numerous health risks, including an increased risk of bone cancer.

The authors of studies highlighting fluoride’s effects on IQ are particularly concerned about the developmental impact of systemic fluoride ingestion and advise pregnant women not to drink fluoridated water. The 2017 book, Pregnancy and Fluoride Do Not Mix, cites hundreds of studies linking fluoride to premature birth (pointing out that rates of premature birth are “unusually high” in the U.S.) as well as preeclampsia, impaired neurological development and autism. The ostensible rationale for U.S. water fluoridation—prevention of tooth decay—does not hold up to scrutiny, because tooth decay rates have been steadily declining in countries that have never practiced water fluoridation.

…mere compliance with national drinking water standards is far from a guarantee that contaminant levels are safe, especially for children.

In light of the growing awareness that chemicals can exert greater effects in combination with other chemicals—a principle known as synergy—the EWG’s finding that U.S. tap water contains at least 250 contaminants is hardly reassuring. Studies suggest, for example, that chemicals not found to be cancer-causing on their own “might act together to promote the process of carcinogenesis.” Although scientists still tend to study one chemical at a time, there are calls to “elucidate and define combinatory actions,” with an entire scientific journal now dedicated to considering “different dose and effect levels, . . . optimal combination ratios or sequences and the prevention of potential adverse events.”

In addition, EWG researchers are calling for “a shift towards aggregate and cumulative assessment of chemical contaminants,” particularly for drinking water. Applying a “cumulative cancer risk framework” to drinking water data, they reported in 2019 that the national attributable cancer risk due to tap water contaminants was two orders of magnitude higher than the benchmark risk level used by the EPA and other regulatory agencies. Stated another way, for the 86% of the U.S. population served by community water systems, tap water contaminants accounted for a cumulative lifetime risk “equivalent to 4 lifetime cancer cases per 10,000 people” rather than one case per million. The researchers also noted that their estimate  is likely to be conservative due to missing data for many contaminants that are either unmonitored, infrequently monitored or out of compliance with monitoring and reporting requirements.

Back in 1996, the Food Quality Protection Act established a requirement that the EPA “set allowable levels for pesticides in a way that would ‘ensure that there is a reasonable certainty that no harm will result to infants and children from aggregate exposure’”; the Act also stipulated an additional tenfold margin of safety “to account for pre- and postnatal toxicity.” A subsequent analysis found that the EPA had failed to apply the additional margin of safety for the majority of pesticides reviewed. Unfortunately, the same phenomenon seems to hold true for drinking water contaminants. One of the important conclusions drawn by EWG and others is that mere compliance with national drinking water standards is far from a guarantee that contaminant levels are safe, especially for children.