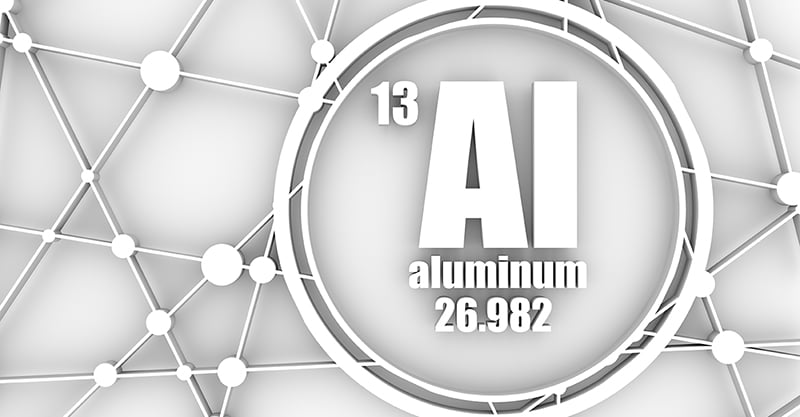 Aluminum is one of the most abundant metals in the Earth’s crust – a chemical element now recognized as a neurotoxin, especially when the human body reaches its burden, though, according to one of the foremost experts on aluminum, Bioinorganic Chemistry professor Dr. Christopher Exley, said in the Environmental Science Processes & Impacts Journal that, “The reality is that the majority of people are completely ignorant of their exposure to aluminum in their everyday lives.” Exley’s research has shown aluminum is the most significant contributing factor to Alzheimer’s disease. One of the most widely-used, cost-effective metals, it is made into everything from cookware to deodorant. Also used in vaccines as an adjuvant, aluminum has now been linked to seizures and brain injury, behavioral disorders, gastrointestinal and inflammatory disease, organ failure, reproductive harm, and infant death. The FDA has never safety tested aluminum in vaccines. Instead, in 1975, the FDA grandfathered in aluminum without toxicology testing, declaring it “Generally Recognized As Safe (GRAS).” Below is information on some of the different types of aluminum and their uses:

Aluminum Phosphate is one of a half a dozen distinct forms of aluminum adjuvants present in vaccines, including the Daptacel DTaP, Pediarix DTaP-HepB-IPV combination vaccine, Twinrix HepA/HepB, Tenivac Td, Mass Biologics Td, and Adacel Tdap. A breakthrough study by scientists from the University of British Columbia in Vancouver, Canada demonstrated significant correlations between rates of Autism and total aluminum adjuvants given to children through vaccines in several Western countries.

Amorphous Aluminum Hydroxyphosphate Sulfate (AAHS) is one of a half a dozen distinct forms of aluminum adjuvants present in vaccines, including the PedvaxHIB, Vaqta HepA, and Gardasil Human Papillomavirus (HPV). Studies have found 100% of the intramuscularly injected aluminum vaccine adjuvant is absorbed into the systemic circulation and travels to different sites in the body such as the brain, joints and the spleen where it accumulates and is retained for years post-vaccination. A 2017 peer-reviewed report found evidence of numerous adverse events reported after vaccination with Merck’s Gardasil vaccines, including life-threatening injuries, permanent disabilities, hospitalizations and deaths.

Aluminum in the food supply comes from natural sources such as water, food additives and aluminum food container and utensil contamination. Certain tea leaves, particularly black tea, contain low levels of aluminum. Intake of aluminum in food additives vary, with dyes, cake mix, processed cheese, baking powder and baking soda among the highest. According to a study from the University of Wisconsin, the intake of aluminum in foods is less than 1% of that consumed by individuals using aluminum containing pharmaceuticals, yet dietary factors, including citrate affecting the absorption of aluminum and aluminum contamination of soy-based and lactose intolerant infant formula are of great concern to public health.

A 2011 FDA study that looked at the safety of using aluminum in infant vaccines concluded that “episodic exposures to vaccines that contain aluminum adjuvant continue to be extremely low risk to infants and that the benefits of using vaccines containing aluminum adjuvant outweigh any theoretical concerns.” However, Physicians for Informed Consent recently took another look at the paper and found that a critical math error was made which negates the FDA’s conclusion.

The multiple intracerebral injection of alumina cream (aluminum hydroxide cream) into a principal cerebral sensorimotor cortical area is effective in producing chronic epilepsy in monkeys. Some of the clinical, pathological and electroencephalographic features of such epileptic animals, supplemented by a motion picture demonstration of a reactive monkey are the subject of the present report.