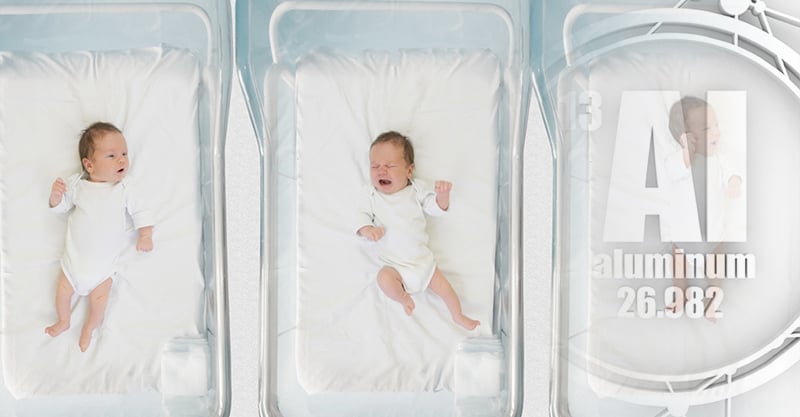 …not only does aluminum constitute a ‘significant component of newborns’ exposure to xenobiotics and contaminants,’ but the consequences of aluminum overload in the perinatal period can have pathological consequences that persist into adulthood.

The scientist citing aluminum’s outsized biological influence—Professor Chris Exley of the United Kingdom’s Keele University—is one of the world’s foremost aluminum experts. He points out that because aluminum exposure is largely insidious, complacency about aluminum’s effects persists despite the nearly universal body burden that human beings now carry. While the metal’s effects appear to be “invariably deleterious,” variables such as age and gender also shape vulnerability. Infants in their first year of life are particularly susceptible to aluminum bioaccumulation, raising concerns about the high levels of absorbable aluminum reported in infant formula and in the parenteral (intravenous) nutrition solutions given to premature babies. Suggesting that these reports represent the “tip of an iceberg,” one group of researchers cautions that not only does aluminum constitute a “significant component of newborns’ exposure to xenobiotics and contaminants,” but the consequences of aluminum overload in the perinatal period can have pathological consequences that persist into adulthood.

Studies documenting aluminum contamination of infant formula date as far back as the mid-1980s, and many have recommended doing something about it. Yet, a quarter of a century later, when Professor Exley and a coauthor examined the aluminum content of fifteen leading brands of formula, they found that 2010 levels remained virtually unchanged—and were about 10 to 40 times higher than the amount of aluminum in human breast milk. Depending on the brand, the aluminum content ranged from 200 to 700 micrograms per liter of formula—the equivalent of up to 600 micrograms ingested per day based on standard formula intake. At these levels, a healthy six-month-old boy weighing 7.9 kilograms would take in almost 80 micrograms of aluminum per kilogram per day (μg/kg/day), far in excess of the maximum daily dose of 4 to 5 μg/kg/day recommended by the Food and Drug Administration (FDA) for the prevention of “accumulation and toxicity.”

One out of every 10 U.S. infants is born preterm, and the preterm birth rate has risen every year since 2015. These premature babies face a particularly elevated risk of “systemic aluminum intoxication.” Due to the immaturity of their gastrointestinal (GI) system, it is common practice to administer nutrients parenterally, sometimes for weeks on end. However, parenteral nutrition (PN) solutions exhibit the same “unresolved” (and decades-old) aluminum toxicity problems as infant formula. One study reported that keeping within the FDA’s recommended aluminum limit of no more than 5 μg/kg/day would only be “feasible” in PN patients weighing 50 or more kilos—and most preterm infants weigh well under three kilograms at birth. Even worse, after premature infants leave the hospital, they often transition to a diet of aluminum-containing formula.

Infants—including preemies—are more vulnerable to aluminum toxicity than adults for several reasons. First, infants have a blood-brain barrier that is highly susceptible to disruption by drugs and toxins. Second, infants lack adequate GI protection, and oral ingestion of aluminum worsens the problem by damaging gut homeostasis (to the point that researchers consider it a risk factor for various inflammatory bowel diseases). Third, whereas the kidney is the organ that the body relies on to excrete aluminum (both ingested and intravenous), the neonate’s kidney is “functionally immature,” making aluminum accumulation “inevitable.” Even in adults with normal kidney function, studies show that only 30% to 60% of the PN aluminum load gets excreted, resulting in build-up of aluminum in the bones and tissues (notably the brain, liver and kidney).

Early exposure to high levels of aluminum can have varied harmful effects, increasing children’s longer-term disease susceptibility as well as contributing to conditions such as uremia (a type of kidney disease), bone disorders and neurologic disorders, among others.

Inertia and its consequences

Taking stock of manufacturer inertia with regard to infant formula’s aluminum content, Professor Exley speculated in 2010 that manufacturers either are failing to monitor their products’ aluminum content or “are not concerned at these levels of contamination.” In either case, he notes, manufacturers have little excuse for their inaction: “Manufacturers of infant formulas have been made fully aware of the potentially compounded issue of both the contamination by aluminium and the heightened vulnerability, from the point of view of a newborn’s developing physiology, of infants fed such formulas.”

Early exposure to high levels of aluminum can have varied harmful effects, increasing children’s longer-term disease susceptibility as well as contributing to conditions such as uremia (a type of kidney disease), bone disorders and neurologic disorders, among others. A study that followed preterm infants for 15 years into adolescence found that the teens who had been exposed to parenteral aluminum had reduced bone mass in the lumbar spine and hips—risk factors for later hip fractures and osteoporosis.

A two-month-old infant may receive up to 1,225 micrograms of aluminum from the vaccines administered at a single well-baby visit and a cumulative 4,925 micrograms by 18 months of age.

Other routes of exposure

Infant formula and PN are not babies’ only routes of exposure to high levels of aluminum. Studies point to possible toxic effects for the embryo and fetus (including effects on fetal metabolism) resulting from maternal use of antacids and other aluminum-containing pharmaceutical products. Moreover, common components of a pregnant woman’s diet (such as the citric acid found in fruit) increase absorption of the aluminum in these products.

Aluminum adjuvants in vaccines and the newborn vitamin K shot are also significant sources of early exposure. The package insert for Pfizer’s vitamin K formulation warns that the product “contains aluminum that may be toxic,” and it also notes that “premature neonates are particularly at risk,” yet it is standard practice to administer vitamin K shots to preterm infants. Young children go on to receive multiple aluminum-containing vaccines in their first three years, and more as adolescents. A two-month-old infant may receive up to 1,225 micrograms of aluminum from the vaccines administered at a single well-baby visit and a cumulative 4,925 micrograms by 18 months of age. Regulators have never properly assessed these astronomical levels of aluminum for safety. Co-exposure to aluminum and mercury (still present in influenza vaccines) makes matters synergistically worse.

Evidence indicates that the body does not easily eliminate vaccine forms of aluminum, which can make their way into the brain; in fact, manufacturers have expressly designed the aluminum used in vaccines to provide “long-lasting cellular exposure.”

Injection as the route of exposure is another important consideration. Toxicologists note that “Depending on the type and route of exposure,” aluminum clearance may have multiple half-lives estimated in hours, days—or years. Evidence indicates that the body does not easily eliminate vaccine forms of aluminum, which can make their way into the brain; in fact, manufacturers have expressly designed the aluminum used in vaccines to provide “long-lasting cellular exposure.”

In 2018, Exley published another groundbreaking study that confirmed the presence of consistently high levels of aluminum in the brains of individuals who had been diagnosed with autism spectrum disorder (ASD). Other studies have linked aluminum to autism severity. In a recent letter published in the Journal of Trace Elements in Medicine and Biology by an independent scientist, the writer describes three converging lines of evidence supporting a link between aluminum adjuvants (Al-adjuvants) and ASD: ecological correlations of vaccination and aluminum adjuvants; experiments in mice; and the discovery of aluminum in ASD brains. He concludes:

While there may certainly be not enough “hard data” evidence to claim that Al-adjuvants in vaccines are responsible for ASD, there is even less evidence supporting the opposite conclusion that Al-adjuvants are completely safe to use without any long-term downfall.

Thus far, regulators and manufacturers—whether of infant formula, PN solutions, vaccines or other aluminum-containing products—have been largely tone-deaf to the crescendo of studies pointing to aluminum toxicity in the very young (or, for that matter, in individuals across the life span). Among those sounding the alarm, many have taken pains to distance themselves from conceding the potential risks of aluminum adjuvants, cavalierly dismissing the aluminum in vaccines as a “relatively small amount.” Even without accounting for adjuvant risks, though, aluminum experts recognize the importance of banishing complacency. Reducing “aluminum-related human pathology, not only in neonates but even in children and adults,” they admit, is also likely to contribute to “the prevention of the epidemic increase of neurodegenerative diseases of elderly people.”