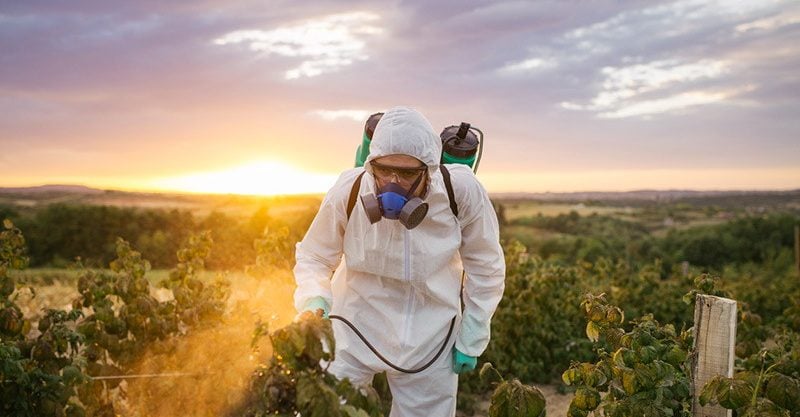 Glyphosate is one of the most widely used herbicides in the United States and the key ingredient in Monsanto’s billion dollar product Roundup. Glyphosate is applied in agriculture and forestry, on lawns and gardens in public and private landscapes. Despite a “probably carcinogenic to humans” classification from the International Agency for Research on Cancer in 2015, the National Pesticide Information Center estimates more than 750 products contain glyphosate in the U.S. Since glyphosate testing began in 2016, reports of glyphosate residues have been discovered in popular vaccines, with the most contamination found in Merck’s MMR, however the FDA has confirmed trace amounts thousands of products, including cookies, crackers, cold cereals, and chips. The U.S. Environmental Protection Agency is finalizing a risk assessment for glyphosate to determine is future use, however, in the meantime, several human and animal studies and articles (below) show that adverse effects of glyphosate on children’s health have been disastrous: including contributing to autism and other chronic autoimmune and neurological diseases. In August of 2018, a landmark case was won against Monsanto’s Roundup: awarding a California school groundskeeper and father of three $289 million for causing him terminal non-Hodgkin’s lymphoma.

WHO: International Agency for Research on Cancer – Monographs Volume 112: Evaluation of five organophosphate insecticides and herbicides

The International Agency for Research on Cancer (IARC), the cancer agency of the World Health Organization (WHO), classified glyphosate as “probably carcinogenic to humans” in 2015.

Glyphosate, the active ingredient in the weedkiller Roundup, is widely present in the U.S. food supply. According to a news report, the Food and Drug Administration (FDA) “has had trouble finding any food that does not carry traces of the pesticide.” Despite decades-long use of glyphosate, the FDA only recently started testing for the chemical’s presence in food.

A series of articles by Anthony Samsel and Stephanie Seneff explains glyphosate’s relationship to many modern diseases. Many other articles and presentations by Dr. Seneff are available at her website: https://people.csail.mit.edu/seneff/

This article reports that temporal trends for glyphosate use in agriculture correlate positively to the rise in autism (see Figure 6). Glyphosate “could be interacting in recent years with other toxins to drive up the prevalence of U.S. autism.”

The surge in childhood obesity began in earnest in the late 1980s. Given the growing evidence that environmental chemicals are key obesity triggers, it makes sense to consider what exposures may have increased over the same time period. Vaccines and glyphosate are two culprits that readily come to mind—and published evidence supports a link.

The substance glyphosate was initially discovered in 1950 by a Swiss chemist, Henri Martin, at the pharmaceutical company Cilag. At that stage the product had no known pharmaceutical purpose. In 1964 Stauffer Chemical Company discovered the chelating capabilities of glyphosate and it was developed and utilized as a descaling agent for boiler systems and steam pipes.

This is a partial list, compiled by Moms Across America of research studies, published papers and reports on vast array of environmental issues facing the health of our children today.

The purpose of this glyphosate testing project is to shed light upon the presence of glyphosate in our water, children’s bodies and mother’s breast milk, hopefully inspiring further scientific studies to support the world in being a healthy, safe place to live.

Gut bacteria play a pivotal role in shoring up brain health and overall health. This fact has become a widely acknowledged talking point in scientific circles as well as in the popular press. The reverse is also true—when diet or environmental factors produce gut dysbiosis (an imbalance of the microbes that reside in the gastrointestinal tract), the imbalance can “impact the pathologies of many diseases.”

Recently, Moms Across America (MAA) learned that Impossible Foods is using GMO soy in their Impossible Burger and are getting their burger into hundreds of restaurant chains like Burger King without labeling or giving a warning to consumers. Celebs such as Katy Perry, Serena Williams, Jay-Z and Trevor Noah funded the vegan burger.

by Stacy Malkan, U.S. Right to Know   propaganda: information, especially of a biased or misleading nature, used to promote or publicize a particular political cause or point of view. Just four corporations now control three quarters of the global supply of seeds and pesticides. Public oversight of their activities is crucial for a safe […]

The Pesticide Generation—Children on the Front Line

Eleven-year-old Théo Grataloup lingers on his way home from Ponsard Middle School in the southeastern town of Vienne, 35km south of Lyon. Even with an overloaded red backpack, the sixth grader likes to wander the streets of his town, stopping to have a crêpe as a snack or finding a shop to buy a compass before going back “home” – or rather to his parents’ travel agency, specialised in horse treks. “Théo is capable of anything and everything in order to avoid doing his homework,” laughs his mother, Sabine Grataloup, delighted to finally see her son make an appearance.

In August, news broke that Cheerios, Quaker Oats, and other breakfast cereals were contaminated with glyphosate weed killer. Just this week, more news of glyphosate in snack bars. Parents across the nation became concerned about their family’s breakfast foods and snacks.