A Letter to Liberals: Censorship and COVID: An Attack on Science and American Ideals 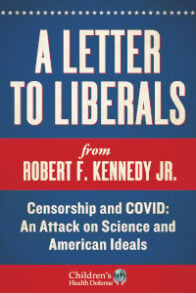 A leading Democrat challenges his party to return to liberal values and evidence-based science.

Democrats were the party of intellectual curiosity, critical thinking and faith in scientific and liberal empiricism. They once took pride in understanding how to read science critically, exercising healthy skepticism toward notoriously corrupt entities like the drug companies that brought us the opioid crisis and were outraged by the phenomenon of “agency capture” and the pervasive control of private interests over Congress, the media and the scientific journals.

During the COVID-19 pandemic, these attitudes have taken a back seat to blind faith in government mandates and countermeasures driven by pharmaceutical companies and captive federal agencies, promoted by corporate media and cynically exploiting the fears of the American people.

“A Letter to Liberals” is Robert F. Kennedy Jr.’s, challenge to “lockdown liberalism’s” embrace of policies that are an affront to once cherished precepts.

Kennedy invites readers to look at the data in order to answer questions such as:

In his November 2021 book “The Real Anthony Fauci” which sold over 1,000,000 copies, Kennedy made predictions that have matured from “conspiracy theories” to proven facts. Among these:

Kennedy throws down the gauntlet for the kind of vigorous scientific debate that liberals have long stood for, and to ensure that unbiased honesty and well-researched thought is brought to bear on one of the most important and still unfolding chapters in human history.

Anti-Social Media Lawsuits Are Coming for Roblox and Discord + More

86% of Kids Under 17 Have Antibodies From Past COVID Infection, CDC Data Shows + More