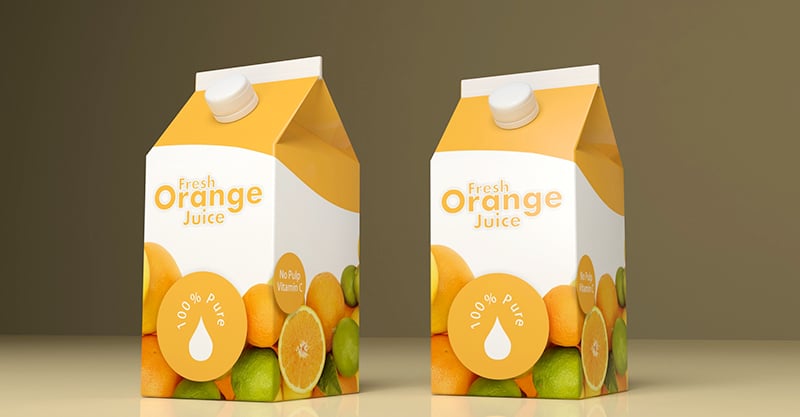 In August, news broke that Cheerios, Quaker Oats, and other breakfast cereals were contaminated with glyphosate weed killer. Just this week, more news of glyphosate in snack bars. Parents across the nation became concerned about their family’s breakfast foods and snacks. Now we learn we must also be looking at the most popular breakfast beverage, orange juice, as well.

… the sample from [Florida’s Natural] showed results almost 3 times higher than the previous year’s test results provided to another organization, showing an increase, rather than a decrease of the use of glyphosate herbicides.

Over one year after initial tests, Moms Across America sent America’s most popular orange juice brands to be tested again for the carcinogenic chemical glyphosate. The new test results, ranging from 2.99 ppb to 17.16 ppb, are not promising. Although the different brands, Tropicana, Minute Maid, Costco’s Kirkland Signature, and Stater Bros. had slightly lower levels of glyphosate weed killer than the first tests conducted a year ago, all still had detectable levels of glyphosate. In addition, Moms Across America added another sample, Florida’s Natural, and the results were not only among the highest of all the brands tested for glyphosate residues, the sample from the brand showed results almost 3 times higher than the previous year’s test results provided to another organization, showing an increase, rather than a decrease of the use of glyphosate herbicides.

Recently plaintiff Alexandra Axon, represented by Richman Law Group, sued Florida’s Natural for misleading the public by claiming their product is natural when in fact it contains glyphosate. The lawsuit is still pending.

The use of glyphosate in orange production and in Florida is controversial for many reasons. Moms Across America founding executive director states, “Orange growers have known for over 3 years now that the World Health Organization branch of  the International Agency for Research on Cancer classified glyphosate a definite animal carcinogen and a probable human carcinogen, and yet they continue to use this harmful herbicide in the growing of oranges. We do not want harmful chemicals in the beverages we give our children and families every day. We have asked these brands to make changes and received no favorable response. We are releasing these test results and we are publicly asking again. Please, stop sourcing oranges from farmers who use glyphosate, and be a part of reducing the exposure of glyphosate to children.” 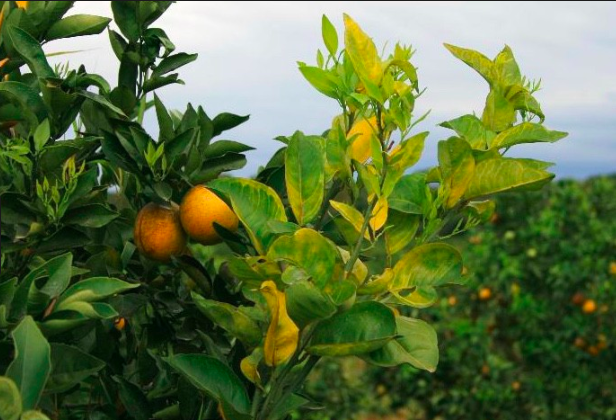 Many orange growers will insist they need glyphosate herbicides to prevent weed growth. They also complain of citrus greening, a plight impacting their livelihood. According to Frank Dean, crop consultant with a BS Biological and Physical Sciences from the University of Houston, who works with orange growers in Florida, commented for this article,” I can say every visual symptom of citrus greening can be induced with an application of glyphosate; that includes asymmetric chlorosis, short internodes, tiny leaves, abnormal flowers and flowering events. When a grove reduces, or, eliminates the use of glyphosate and the organic substances and minerals blocked by glyphosate are applied, the sick trees begin to recover. Over time, the soil has the sub-lethal dose of glyphosate reduced with organic amendments and the indicator of the disease cannot be found with CT Scans for 16S rDNA.”

In other words, the use of glyphosate contributes to citrus greening and reduction of soil quality. Dr. Don Huber, 50 year plant pathologist has pointed out that lower soil quality also mean lower water retention, resulting in higher water usage, less nutrients in the produce, and decreased quality of the crop. Discontinuing the use of glyphosate herbicides in orange groves, and all farming in Florida, would not only reduce exposure to children, but improve the health, productivity and profits of the crop.

A major denier of this assessment would be the University of Florida, which is funded by Monsanto, and who puts out the majority of the information about citrus greening. They claim it is an insect, and therefore call for more pesticides, likely produced by Monsanto. 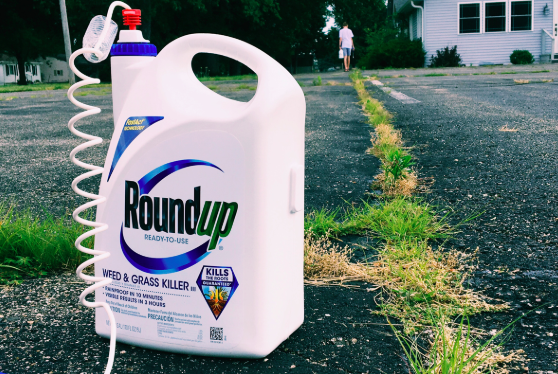 The use of glyphosate herbicides is also a hot topic due to the recent Johnson v Monsanto Trial verdict, in which a California jury awarded millions to a school groundskeeper stricken with non-Hodgkin’s Lymphoma in connection to using Roundup®️ and Ranger Pro – both glyphosate herbicides. Monsanto was found responsible for its role in producing and selling the carcinogenic substance when the Judge upheld the jury’s ruling of guilty on all counts.

A new French study showed an 86% lower incidence of non Hodgkin’s Lymphoma when participants ate organic food, which does not allow the use of glyphosate. 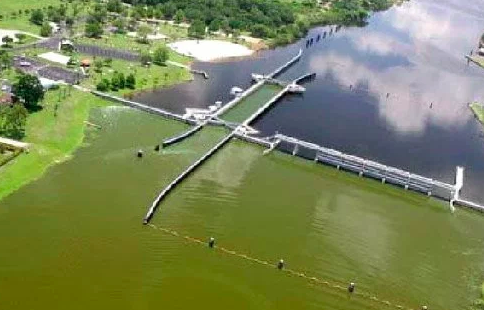 In addition, environmentalists have long been linking glyphosate to toxic green algae, which has plagued Florida for months.  Scientists from many studies are finding that so-called blue-green ‘algae’ are actually not algae but rather a type of primitive bacteria called ‘cyanobacteria.’ They have a special skill that is rare among all species to be able to fully metabolize glyphosate and use its phosphorus atom as a source of phosphorus. So they obtain a competitive advantage against other species in the presence of chronic glyphosate exposure. Phosphorous levels are a serious issue, as documented in the Lake Erie’s cyanobacteria blooms in 2017- “It turns out that many cyanobacteria present in Lake Erie have the genes allowing the uptake of phosphonates, and these cyanobacteria can grow using glyphosate and other phosphonates as a sole source of phosphorus.” stated George Bullerjahn of Bowling Green State University in Ohio.

As shown in this Mercola article, scientists and environmental leaders have long been linking the chemicals (the most widely used chemical is glyphosate herbicide) used in factory farm runoffs in Florida to Red Tide which has devastated millions of marine life. Glyphosate residues are found at very high levels in animal feed and presumably then the animal feces, creating pollution which runs off into the waterways. These same chemicals are used in sugar and orange groves. The blue-green algae (cyanobacteria) are able to convert free nitrogen from the air into nitrates. Thus, they cause an excess of nitrates in the water, in addition to those nitrates that come from excess run-off from nitrate-based fertilizers. The excess nitrates provide essential nutrients for the red algae (Karenia brevis), that then grow to large numbers offshore, which can cause Red Tide.

In other words, glyphosate FEEDS cyanobacteria…or…another perspective is that mother nature’s way of cleaning up glyphosate is with cyanobacteria blooms. These blooms can then encourage the growth of Red Tide…which has devastated marine life, tourism, local restaurants and business along thousands of miles of Florida’s coastline. 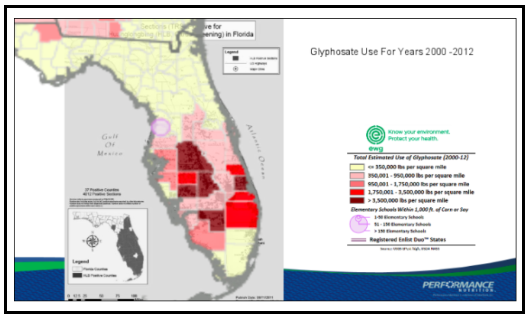 The amount of glyphosate that is used in Florida on orange groves, sugar cane fields, and on city streets is enormous. Over 3.5 million lbs per square mile of glyphosate was sprayed in Florida according to the Environmental Working Group (EWG) between 2000-2012.

In addition, glyphosate herbicide AquaMaster was permitted to be sprayed directly in waterways such as Lake Okeechobee and the Everglades, a nature reserve. Local environmentalists are outraged by the lack of action from their governor and local authorities to discontinue the use of glyphosate herbicides and protect marine life. 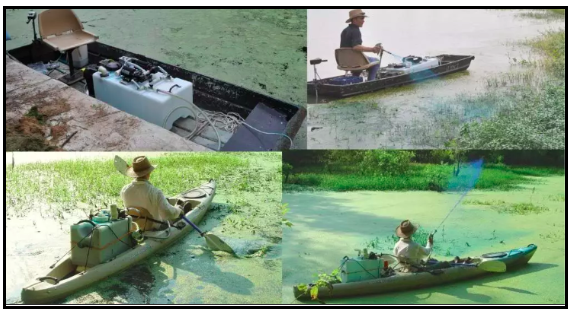 Glyphosate herbicides are sprayed to prevent weed growth in the Florida Everglades. Glyphosate feeds the growth of cyanobacteria, or “green algae,” and then copper is sprayed to combat the green algae. Copper is a known spermicide. 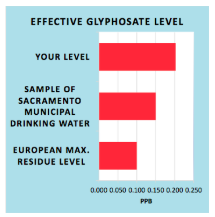 Moms Across America commissioned the testing of water in Lake Okeechobee and off the coast of Cape Coral. Lake O results, where cyanobacteria was present, showed levels between half the amount and  2 times higher than is allowed in European drinking water. Because cyanobacteria digests glyphosate it would be expected that where cyanobacteria is present the water would sometimes test for lower levels of glyphosate. 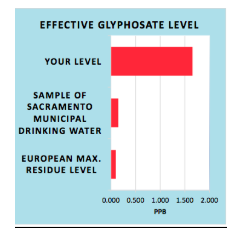 The test results off the coast of Cape Coral, at the mouth of the Caloosahatchee River where cyanobacteria was present* showed levels of glyphosate 5 –12 times higher than is allowed in European drinking water.

Runoff from orange grove spraying and weed management with glyphosate in the Everglades contributes to the presence of glyphosate in Florida waterways. A 2013 study shows that glyphosate can remain viable in salt water for 315 days. Another 2016 study by Roy et al. has shown that glyphosate induces cardiac toxicity in fish. Harm from glyphosate upon marine life, pets, and humans living in Florida is a scientifically sound concern. Residents, an notable environmental proponents such as Erin Brockovich are increasingly justified in calling for action.

WFTX Fox 4 News reported in 2016 regarding South Florida, “The result of one study explains that “compared with the state, there is a statistically significant 36% increased risk of childhood cancer.” 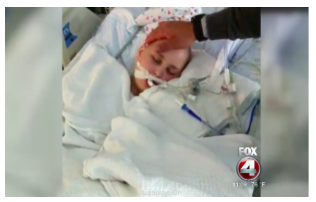 Although there is no conclusive evidence this increased risk is due specifically to glyphosate, author Warren Wright continues, “these findings are suggestive of environmental risk factors in our area.” Considering that glyphosate is widely and heavily used in this specific environment and has been deemed a definite animal carcinogen and a probable human carcinogen by the World Health Organization, residents are justifiably outraged that the spraying of glyphosate would continue on crops or waterways for any reason. Some local residents have taken action. Stuart and Miami, Florida have banned the use of glyphosate. Residents in Tampa are suing Monsanto. Florida residents want the entire state to be protected and are calling on Governor Scott to place a moratorium on glyphosate. 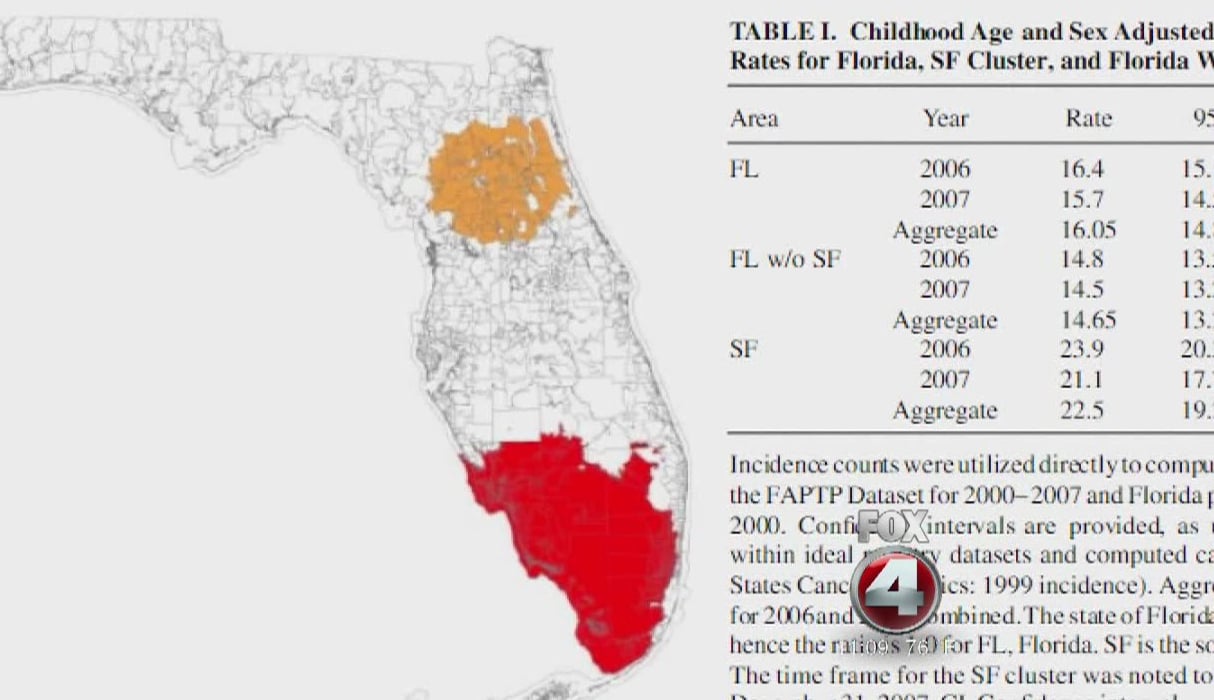 The conservation group Friends of the Everglades is frustrated that the Florida State Department of Health (FDOH) has yet to take any action.  “What I can say is that scientists who are fearful for their careers and have a hard time finding funding, would all say this is an area that needs much more serious investigation and follow-up by the state of Florida,” says chairman Alan Farago.

Chemical farming proponents and even some food movement individuals have claimed that low levels of glyphosate are safe. This information is not only confusing but blatantly wrong. Peer-reviewed scientific studies have shown that ultra-low levels of glyphosate herbicides cause, yes cause, non-alcoholic fatty liver disease. According to the Liver Foundation, 1 out of 10 Americans now has liver disease. Some are children as young as 8 years old. Additional studies show that low levels of glyphosate herbicides can be endocrine disruptors, changing sex hormones. In addition, Andre Leu, president of IFOAM and author of The Myth of Safe Pesticides stated at the Monsanto Tribunal “Children do not have the enzymes in their livers to break down toxins, especially infants and unborn children. There are NO safe levels.” Clearly, ignoring the science and encouraging people to continue to consume glyphosate, especially children who are especially vulnerable to pesticides, a fact acknowledged by the American Academy of Pediatrics, is dangerous. 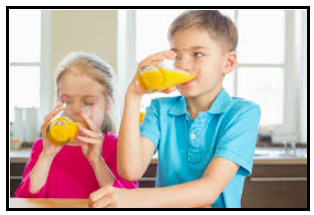 Millions of children often start their day with a glass of orange juice and eat oatmeal or Cheerios with high residues of glyphosate. By doing so, they may be increasing their risk of liver disease, cancer, and many other health issues connected to glyphosate. Too many, however, want to feel comfortable in eating what they want to eat. Too many farmers want to continue to spray chemicals they have been told are safe. And too many food manufacturers want to continue profiting from cheap food grown with chemical farming. The question is, when will there be too many sick children? And when will the harms from chemical farming be deemed too much?

Take action today. Tell your Governor you do not want glyphosate herbicides used anywhere in your state. Sign petition.

After you sign our letter to Florida’s Natural, please also do this: