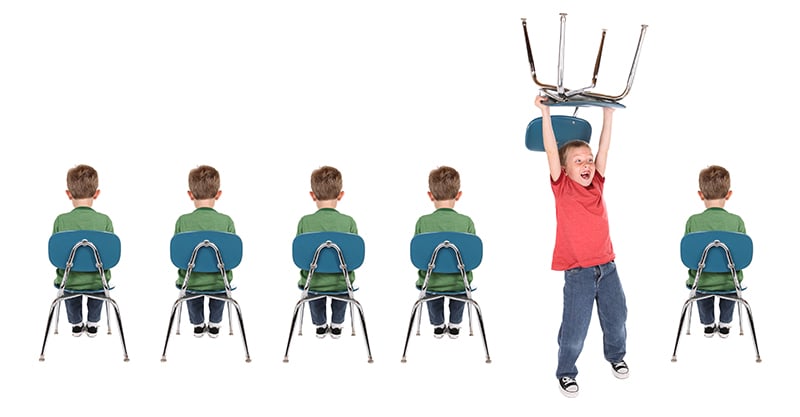 When the American Psychiatric Association (APA) released its first Diagnostic and Statistical Manual of Mental Disorders (DSM) in 1952, many of today’s most common pediatric diagnoses had yet to be invented. “Attention deficit disorder” (ADD) did not make its first DSM appearance until 1980, when the APA established it as a pediatric neurobehavioral disorder characterized by problems with inattention, impulsivity or hyperactivity. (ADD’s DSM precursor, “hyperkinetic reaction of childhood,” focused mostly on excessive motor activity.) In 1987, the APA replaced ADD with “attention deficit hyperactivity disorder” (ADHD), which is now the most commonly diagnosed childhood neurodevelopmental disorder. The most recent DSM also allows for a dual ADHD-autism diagnosis, recognizing that anywhere from one-fifth to one-half of children with ADHD meet the criteria for autism spectrum disorder (ASD).

How many American children currently have an ADHD diagnosis? Estimates range from a low of 5% (cited in the last DSM) to as high as 16% (cited in a 2015 study of elementary-school children). Prevalence is at least twice as high for boys as girls; by high school, about one in five boys has an ADHD diagnosis versus one in 11 girls. Community studies place the male-to-female ratio closer to four to one.

Prevalence has increased dramatically over time. From 2003 to 2011, according to CDC research, ADHD diagnoses rose by 42% among children and adolescents ages 4-17, translating into an average annual increase of 5%. Another group of researchers analyzed national survey data over an even longer period of time—two decades—and reported a steady rise in ADHD rates (again in 4-17 year-olds) since 1997; overall prevalence went from 6.1% in the late 1990s to over 10% by 2016 (14% versus 6.3% for boys and girls, respectively, in 2016). This “consistent upward trend” held true “across subgroups by age, sex, race/ethnicity, family income, and geographic regions,” indicating a “continuous increase in the prevalence of diagnosed ADHD among US children and adolescents.”

While acknowledging that genetics likely play a role, few dispute that environmental factors have a lot to do with ADHD’s hijacking of so many young children’s lives. Recent studies have zeroed in on culprits that include lead and other heavy metals, fluoride, pesticides and other endocrine-disrupting chemicals.

… a Boston-based study of almost 1500 mother-infant pairs found that elevated blood lead levels in early childhood increased the risk of ADHD by 66%, particularly in boys …

It is well established that “excessive metals are detrimental to neurodevelopmental processes and have neurotoxic effects that impair cognitive function.” Research from the U.S., Mexico, China, eastern Europe and elsewhere points to strong associations between heavy metals and ADHD symptoms. The majority of studies have focused on the risks of lead exposure. For example, a Boston-based study of almost 1500 mother-infant pairs found that elevated blood lead levels in early childhood increased the risk of ADHD by 66%, particularly in boys—and nearly 9% of the children had elevated lead levels.

Researchers also have linked ADHD risks to other metals, including mercury, cadmium, antimony and manganese. Of concern is the “growing evidence that co-exposure to multiple metals can result in increased neurotoxicity compared to single-metal exposure, in particular during early life.”

Accumulating research is making it more difficult for public health officials to deny that fluoride has neurotoxic effects on cognition and behavior. Studies show that neurotoxic impacts readily result from the levels of fluoride exposure that North American children typically encounter in municipal water supplies.

Another recent study of Mexican children between 6 and 12 years of age—funded in part by the U.S. government—sought to characterize the association between prenatal fluoride exposure and outcomes that included ADHD symptoms. Study strengths included extensive longitudinal follow-up as well as the capture of “high quality individual biomarker exposure across multiple developmental time points” and “detailed assessment of ADHD-like behaviors.” The researchers found an unequivocal association between higher prenatal fluoride exposure and behavioral symptoms of inattention (though not ADHD symptoms of hyperactivity or impulsivity). Despite the U.S. government funding, the Mexico-based research went unmentioned by virtually all the major U.S. media.

A number of pesticides and other chemicals in widespread use operate as endocrine disruptors, interfering with natural hormone function. Research has linked many of these substances to both ADHD and ASD via their disruption of thyroid hormone function and an important neurotransmitter called GABA. Endocrine disruptors specifically linked to an increased risk of ADHD include polychlorinated biphenyls (PCBs), chlorpyrifos, bisphenol-A (BPA), polybrominated diphenylethers (PBDEs), certain phthalates and other chemicals. Prenatal and postnatal exposure to chlorpyrifos—a ubiquitous organophosphate insecticide—has likewise been linked to ASD, even at the lowest detectable doses. As with heavy metals, the “combined actions of pesticides” deserve greater attention, “because mixtures of these substances may cause higher toxic effects than those expected from the single compounds.”

Public health officials profess that ADHD is a significant public health issue, lamenting the fact that three out of four childhood cases of ADHD persist into adulthood. If these concerns are genuine, there are many steps that could be taken to further pinpoint the environmental toxins at fault and lower children’s exposure. Instead, however, government agencies such as the Food and Drug Administration (FDA), CDC and Environmental Protection Agency (EPA) continue to prevaricate about the risks of established neurotoxins, declining to investigate or regulate the thimerosal and aluminum in the vaccines routinely given to pregnant women, the fluoride in tap water or the pesticides in children’s food. Concerned researchers point out that most studies document neurotoxic risks arising from “common exposures” rather than “high exposure situations”—the obvious implication is that young children, including the unborn, “require more protection than is currently provided.”