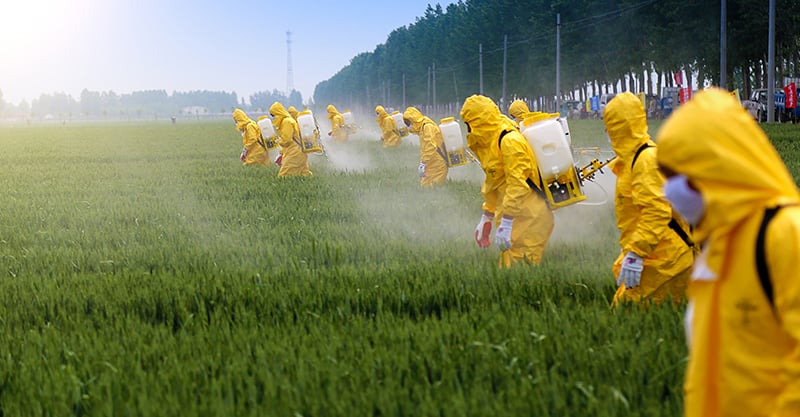 Chlorpyrifos—described by some as “the most dangerous pesticide you’ve never heard of”—is an insect-killing organophosphate. Organophosphates trace their roots back to Nazi-era IG Farben nerve gases; contemporary scientists still describe the compounds as “junior-strength nerve agents” that have a mechanism of action comparable to sarin. Dow Chemical—the company that helped bring the world mustard gas during World War I and napalm and Agent Orange during the Vietnam war—is the manufacturer of chlorpyrifos-containing insecticides.

In the U.S., the agriculture industry applies millions of pounds of chlorpyrifos annually to at least 50 major food crops. Farms around the world also use the chemical “heavily and ubiquitously.” Chlorpyrifos-sprayed crops include some of the foods most likely to be consumed by children, such as corn, soy, apples, oranges, strawberries and nuts. Researchers have linked both prenatal and postnatal chlorpyrifos exposure to brain damage even at the lowest detectable doses. They also note that exposure “is not limited to agricultural environments, as [organophosphates] are ubiquitous in food, dust, and air”—although adults and children who eat an organic diet display significantly reduced levels.

Flagging exposure to chlorpyrifos and other organophosphates as a risk factor for autism spectrum disorders (ASDs) and other developmental problems—including higher-order cognitive deficits, attention deficits, lower IQ scores and impaired working memory—concerned scientists have been sounding the alarm for quite some time. Yet, despite the substantial body of evidence documenting adverse effects not just on human health but also on wildlife and the environment, the Environmental Protection Agency (EPA) proclaimed on July 18 that it will take no action other than to “continue to review the safety of chlorpyrifos.”

… the agency admitted that it was unable to conclude that the risk from aggregate exposure from the use of chlorpyrifos met federal safety standards.

A history of stonewalling

As the Union of Concerned Scientists has remarked, the EPA does not regulate chemicals “willy-nilly” but “usually has to be pushed, sometimes hard.” This observation may help explain the EPA’s erratic behavior and frequent stonewalling with regard to chlorpyrifos over the past two decades. For example, emerging health and environmental concerns prompted the slow-moving agency to disallow household uses of chlorpyrifos in 2000, but in 2006, the EPA did not hesitate to reauthorize the insecticide for widespread agricultural use.

In 2007, the Natural Resources Defense Council (NRDC) and Pesticide Action Network (PAN) petitioned EPA to ban chlorpyrifos, citing its neurotoxicity. The EPA ignored the petition until November 2015, when, under pressure from a federal court of appeals to respond to the petition, the agency admitted that it was “unable to conclude that the risk from aggregate exposure from the use of chlorpyrifos” met federal safety standards. After hinting at the strong possibility that it would ban chlorpyrifos in or on food, the EPA received over 80,000 public comments supporting such a ban. Yet, even as sister countries such as the UK withdrew their approval for most agricultural uses of chlorpyrifos around the same time, the EPA then made an about-face decision, rejecting the “science-based conclusion reached just a few months before.” The EPA also chose to ignore a 2017 report written by some of its own scientists (along with researchers at the Departments of Interior and Commerce), which concluded that chlorpyrifos was “likely to adversely affect” 97% of the nearly 2000 endangered species examined (1778/1835), including plants, birds, fish, mammals, reptiles and others.

To explain the reversal, observers have pointed to massive lobbying by Dow Chemical in 2016—to the tune of $13.6 million—while also calling attention to meetings in this time frame between the company and Administration officials. In April 2019, noting the EPA’s 12 years of foot dragging on the NRDC/PAN petition, a federal appeals court again scolded the EPA, ordering it “to issue a final decision with respect to the petition objections within 90 days.” On July 18, the EPA complied with the court order by stating that it would do exactly…nothing.

… the authors noted that while the inherent toxic properties of pesticides warrant the strictest and most comprehensive risk assessment possible, regulators mostly rely on industry-driven research that often biases safety assessments in an industry-favorable direction.

Just half a year prior to EPA’s July 2019 reiteration of its do-nothing stance on chlorpyrifos, leading toxicology experts at Harvard, the Karolinska Institute and Stockholm University published a scathing critique of the chlorpyrifos regulatory review process. Writing in the journal Environmental Health, the authors noted that while the “inherent toxic properties” of pesticides warrant the strictest and most comprehensive risk assessment possible, regulators mostly rely on industry-driven research that often biases safety assessments in an industry-favorable direction.

And so it has gone with chlorpyrifos. The authors of the critique point to the multiple strands of evidence from independent studies (epidemiological, in vivo and in vitro) that consistently highlight “adverse health effects of chlorpyrifos exposure on the developing nervous system, associated with lowered IQ at school age,” noting that these harmful outcomes occur “at exposure levels far below those recognized to cause effects on brain development in an industry-funded developmental neurotoxicity…study commissioned for regulatory purposes.” Curious about the “divergence” in the conclusions of independent and industry-funded researchers, the Environmental Health authors obtained and examined the original raw data and study methods used by industry, identifying a number of omissions and irregular research practices that “inappropriately decrease the ability of the studies to reveal true effects.” Concluding that the test reports submitted by the chlorpyrifos manufacturer “may be misleading,” the authors state:

This discrepancy affects the ability of regulatory authorities to perform a valid and safe evaluation of these pesticides. The difference between raw data and conclusions in the test reports indicates a potential existence of bias that would require regulatory attention and possible resolution.

Moreover, the EPA has shown itself to be all too willing to ignore science or make do with manipulated science for other neurotoxins as well.

Par for the course

The EPA’s betrayal of its mandate to protect the public and the environment has prompted some to describe the agency as “a hall of funhouse mirrors,” where organizational goals get “distorted and twisted from their original form, reversed and turned upside down until you start to wonder what exactly was real in the first place.” Although some are portraying the EPA’s regulatory capture as a recent phenomenon, the agency’s decades-long chlorpyrifos saga reveals this assertion to be disingenuous. Moreover, the EPA has shown itself to be all too willing to ignore science or make do with manipulated science for other neurotoxins as well. In the fall of 2019, for example, a lawsuit against the EPA will move forward that faults the agency for its “exceptionally cavalier” (but industry-friendly) decades-long dismissal of the large body of human and animal evidence demonstrating that the fluoride chemicals added to drinking water are neurotoxic.

Nor is the EPA the only captured federal agency “dominated by the industries it presumably regulates.” Accounts are legion of federal agencies predisposed to cater to corporate agendas rather than the public interest—including the Federal Communications Commission (FCC), the Centers for Disease Control and Prevention (CDC), the Food and Drug Administration (FDA), the National Academy of Sciences (NAS) and energy agencies. Without pressure from the citizens to whom they are ultimately accountable, it seems likely that these agencies will continue to place children’s health somewhere toward the bottom of their priority list.