Judging by recent news reports and government actions, public health officials are preparing us for a new epoch of polio alarmism, one that stands to serve the same purpose as the earlier waves of browbeating by media and officials — namely, to steer a frightened public toward further vaccination. 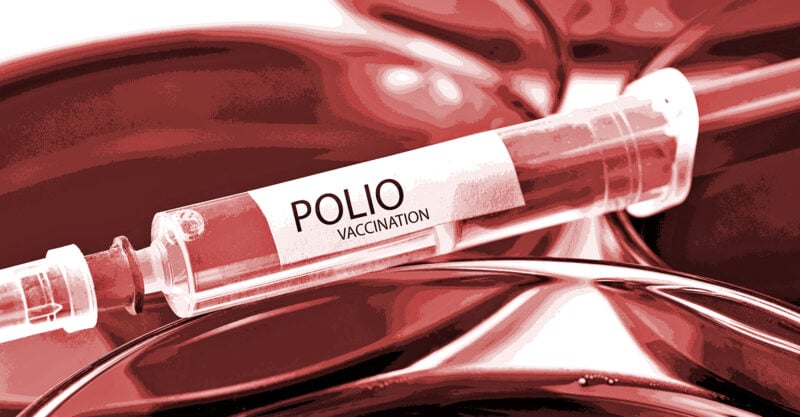 Before COVID-19, “polio” was perhaps the condition carrying the strongest cultural baggage as a trigger for parental and societal fears, thanks to years of branding that included images of children immured in cumbersome iron lungs.

For both polio and COVID-19, the public panic fomented by the media served the underlying medical-pharmaceutical agenda of promoting mass vaccination.

Even back in the pre-polio-vaccine days of 1937, an anonymous editorialist for the Journal of the American Medical Association (JAMA) sought to put cases of polio-attributed paralysis — relatively rare — in perspective, suggesting, “Without the overemphasis in the press the vast majority of people would not have been concerned by the few hundreds of cases among many millions of people.”

The JAMA editorialist also berated officials for stoking polio fears, arguing that “panic appears in the minds of the public” in part because poliomyelitis “is a visibly crippling disease,” but also because the panic “is frequently reflected in the statements and actions of public officials.”

In 1996, Politico satirized media fear-mongering in a hilarious critique of “Mad Panic Disease (MPD) in reporters and its human form Crikey-Jesus-look-at-this-story-on-the-front-page Disease (CJD),” mock-reassuring readers that the “World Headline Organisation (WHO)” and the “Scaremongering and Vacillation Committee (SVC)” would be taking the matter in hand.

Judging by recent news reports and government actions, however, the Scaremongering and Vacillation Committee is preparing us for a new epoch of polio alarmism, one that stands to serve the same purpose as the earlier waves of browbeating by media and officials — namely, to steer a frightened public toward further vaccination.

It’s all in the sewage

This past summer in New York, officials asserted a link between a single case of adult paralysis and genetic fragments in sewage samples purportedly matching oral polio vaccine components.

Although the U.S. does not administer oral polio vaccines, the conventional theory is that individuals who receive oral doses in other countries pose a “shedding” risk that can leave detectable vaccine-related genetic material in stool samples and sewage.

On this tenuous basis, New York’s governor on Sept. 9 declared a state disaster.

Disasters turn out to be a handy means of “opening up more vaccine resources,” including resources to go after New York counties where, from the state’s perspective, polio vaccination rates are too low.

Thus, the state is deputizing “midwives, pharmacists, emergency medical workers and other health care workers” to administer polio vaccines and boosters to virtually all and sundry, including children and babies who have not yet started the polio vaccination series; adults who are either unvaccinated, partially vaccinated or “unsure whether they received the vaccine”; and individuals (such as healthcare providers and wastewater treatment workers) deemed to be at “increased risk.”

In London, meanwhile, health authorities are aggressively pushing polio boosters citywide for 1- through 9-year-olds on the basis of suspect sewage samples alone — with no cases of the disease.

U.K. officials described the vaccination campaign as “a precautionary measure.”

And in Israel, where authorities pronounced polio the cause of a 3-year-old’s paralysis earlier this year, multiple cities suddenly reported “traces” of polio in sewage, prompting media hype about “spread” and exhortations for children and teens ages 7 through 17 years to get the oral polio vaccine.

New York, London and Jerusalem were three of the jurisdictions that imposed the harshest COVID-19 restrictions and pushed the COVID-19 jabs the hardest — showing themselves to be willing agents for tyranny disguised as a health emergency.

At a time when large segments of the public have awakened to the dangers of the COVID-19 shots and more parents than ever are questioning childhood vaccines, is this influential triumvirate’s drum-beating about a possible polio resurgence — including calls for widespread polio vaccination — a mere coincidence?

At the very least, the provocative sewage claims by these powers-that-be should be scrutinized.

An explication of sewage surveillance gives credit to an early-2000s study in Helsinki as one of the first to effectively use sewage to snitch on putative polioviruses.

However, it was the oral polio vaccine that furnished the basis for the experiment:

“Scientists flushed a polio vaccine down a toilet 20 kilometres [about 12 miles] away from a wastewater treatment plant. The researchers then collected wastewater samples … over four days, and showed they could still detect the vaccine after 800 million litres of wastewater had passed through the system.”

What was it about the hardy vaccine that seemingly and scarily allowed it to resist millions of flushes?

The researchers didn’t ask, though a 2021 study showing bioaccumulation of “rotavirus vaccine strains” in oysters suggests the question remains pertinent.

Instead, public health authorities decided to add wastewater monitoring to their disease (not vaccine) surveillance toolkit.

Wastewater experts admit their surveillance techniques are fallible and far from reliable.

Earlier this year, Tufts University professor Amy Rosenberg cautioned that analysis of wastewater “is a chemically and biologically complex process” involving “multiple steps that are difficult to standardize and that require systematic controls,” with wastewater often containing “compounds that can interfere” with the principal method used to spot pathogens.

That “principal method,” since the 1990s, is the very same polymerase chain reaction (PCR) technique abused to such an extent during COVID-19 as to now be roundly denounced as “useless.”

Rosenberg also noted “privacy and ethical concerns,” describing, then glossing over, the potential for misuse if wastewater data are linked with identifiable genetic or personal data — linkages that may be enabled by concurrent social media analysis or intelligence from geographic information systems.

In a paper published in August 2021, a group of 70 international experts also bemoaned the lack of “harmonized” quality assurance/quality control procedures, admitting that false or “inconclusive” results could conceivably cause “policymakers, public health officials, and the public to lose confidence” in the utility of wastewater monitoring.

However, there seems to be little risk of rejection by public health officials.

Au contraire, using the coronavirus as the excuse, the Centers for Disease Control and Prevention (CDC) enthusiastically is positioning wastewater surveillance as a “new frontier for public health,” at the same time that leading schools of public health are declaring it the “next frontier” specifically in the fight against polio.

And water scientists who can see which way the funding winds are blowing are rushing to endorse sewage monitoring despite the pitfalls they readily acknowledge, with Rosenberg calling for its further development and expansion and supporting Harry-Potter-style “constant vigilance.”

Others even helpfully point out how officials could easily use wastewater analyses to justify “isolation practices” and implementation of stay-at-home directives, masking, social distancing or other “mitigation measures”  — never mind that COVID-19 conclusively demonstrated the arbitrariness and lack of science behind such measures.

Paralysis by any other name …

As Children’s Health Defense has pointed out in other articles, “There is, and always was, ample evidence to suggest that poisoning — whether by lead arsenate, DDT, or later, the toxic ingredients in polio vaccines themselves — is the most credible explanation for the paralytic symptoms and deaths that were labeled as ‘polio.’”

Ditto for the “polio-like illnesses” and deaths chalked up to “acute flaccid myelitis” and “acute flaccid paralysis,” which, like polio, authorities conveniently blame on lurking viruses rather than finger chemical — or vaccine — culprits.

For children presenting with severe respiratory illness, the CDC is even recommending healthcare providers make testing for these other viruses “a typical part of their diagnostic routine” using — what else? — PCR methods.

If public health officials were truly concerned about sewage and what it can tell us, why not focus on addressing “the health issues associated with long-term simultaneous exposure to a large number of pharmaceutical products” — including the active ingredients and metabolites of non-steroidal anti-inflammatory drugs, cardiovascular drugs, antidepressants and antipsychotics — “known to partially survive the conventional process of wastewater treatment?”

In some settings, upgrading sewage systems — as part of classic water, sanitation and hygiene interventions — could also make a critical difference.

Instead, having rated polio a “Public Health Emergency of International Concern” in 2014, the WHO chose to grant Emergency Use Listing status in late 2020 to an unlicensed oral polio vaccine funded by Bill Gates — and other experts are calling for “guarantee mechanisms” to incentivize the expansion of the polio vaccine supply chain.

In short, bolstered by effective fear appeals — “persuasive messages that attempt to arouse fear by emphasizing the potential danger and harm that will befall individuals if they do not adopt the messages’ recommendations” — the vaccine gravy train appears poised to keep on rolling on.