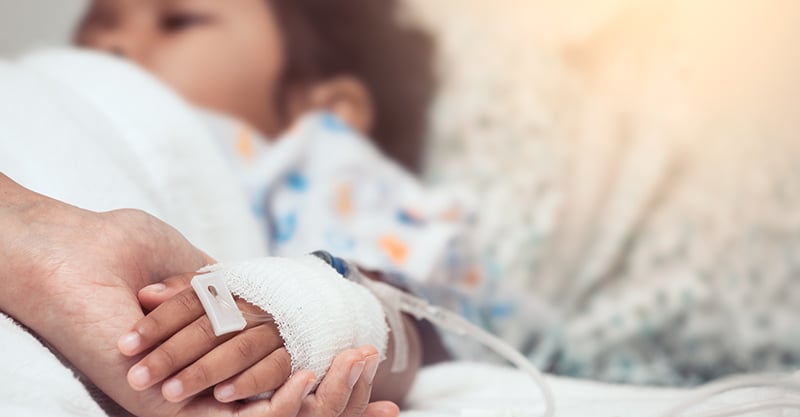 Over the past five years, a rare and serious “polio-like” illness—called acute flaccid myelitis (AFM) or acute flaccid paralysis (AFP)—has been cropping up in “unusual” clusters around the U.S., mostly in children. AFM/AFP cases have also been reported in Europe, India and other countries. AFM targets one area of the spinal cord (the gray matter) and can cause permanent disability and sometimes death.

A Stanford neurologist admits that acute flaccid paralysis looks just like polio, but that term really freaks out the public-health people.

Public health experts view acute flaccid paralysis as “the most common clinical manifestation of paralytic poliomyelitis”—and when laboratory analysis points to poliovirus as the cause of those symptoms, that person is diagnosed with “polio.” However, when there is no confirmed poliovirus involvement, health providers instead diagnose the condition as “AFM” or “AFP,” even though the clinical picture is identical to polio. A Stanford neurologist admits that AFM “looks just like polio, but that term really freaks out the public-health people.”

The current uptick in AFM cases in the U.S. seems to have begun around August 2014,  with 362 cases confirmed by the Centers for Disease Control and Prevention (CDC) since that time. Sixteen states have reported dozens of cases in 2018 in infants and children, including Pennsylvania (3 cases), Minnesota and Washington (6 cases each), Illinois (9 cases) and Colorado (14 cases). Epidemiologists believe that the number of identified cases likely underestimates the number of actual cases. In 2014, a speaker asked several hundred pediatric neurologists attending a conference how many had seen a recent case of AFM: “About one-third raised their hands [and] dozens kept their hands up when asked if they had seen two, three, five or more [cases].” Given that the chances of AFM are ordinarily pegged to be “about one in a million,” a CDC neuroepidemiologist pronounced this show of hands “remarkable”—but what is “remarkable” is that public health officials are studiously ignoring possible environmental triggers that include vaccination.

In a study describing a 1958 polio outbreak in Michigan published in the Journal of the American Medical Association, the authors reported that in a large number of paralytic as well as nonparalytic patients poliovirus was not the cause.

The checkered history of “polio”

Poliovirus is an enterovirus—a virus that inhabits the gastrointestinal tract but is capable of traveling to the nervous system. From the CDC’s blinkered perspective, only poliovirus is capable of causing the paralytic condition labeled “polio.” However, early polio researchers (publishing not long after the introduction of the first polio vaccine) painted a different picture. In a study describing a 1958 polio outbreak in Michigan (published in the Journal of the American Medical Association or JAMA), the authors reported that “in a large number of paralytic as well as nonparalytic patients poliovirus was not the cause” [emphasis added]. The JAMA researchers also noted that their laboratory analyses had not only identified two different “immunological types of the poliovirus” but also other types of enteroviruses and “there were no obvious clinical differences” among them [emphasis added].

Dr. Suzanne Humphries, who cites the JAMA study, has observed that poliovirus existed as a “common” and “trivial” bowel inhabitant for millennia—not causing paralysis until the 20th century. Humphries suggests that dietary and environmental factors (including exposure to toxins such as arsenic, lead and DDT) as well as the advent of “invasive medical procedures” (such as “intramuscular injections of many types, including…vaccines”) weakened 20th-century individuals’ innate immunity and were capable of fostering the paralysis “uniformly attributed to poliovirus infections.”

Unlike the one-cause-one-outcome view of paralytic polio, the CDC and other contemporary researchers agree that AFP has a “broad array of potential etiologies.” Some news reports have touched on the likely role of environmental toxins, but virtually all of the published research on AFM has stayed away from that possibility. Instead, researchers have been busy making the case that two non-polio enteroviruses—enterovirus D68 (EV-D68) and enterovirus A71 (EV-A71)—are primarily to blame, even though neither one has shown itself to be a consistent pathogen. Studies out of Colorado published in Lancet Infectious Diseases (2018) and the CDC’s Morbidity and Mortality Weekly Report (2016) not only posit a link between the two enteroviruses and AFM but also describe other mysterious neurologic outcomes “of unknown etiology” that have appeared of late in Colorado children.

A perplexing aspect of EV-D68 (an enterovirus first identified in the 1960s) is that, like the millennia-old poliovirus, the genetically older strains of EV-D68 “had never been known to cause paralysis” before 2014, being primarily associated in otherwise healthy individuals with mild cold-like symptoms. Post-2014, researchers who isolated never-previously-encountered strains of EV-D68 from pediatric AFM cases speculated that “recent genetic virus evolution” might be responsible for EV-D68’s sudden “neurovirulence.”

Studies in countries such as Ghana and China have identified vaccine-derived poliovirus in children with paralysis in regions with high live oral poliovirus coverage—while labeling the children’s illness AFP rather than polio.

The case of the oral polio vaccine

“Neurovirulence” is a term very familiar to those who have studied the occurrence of vaccine-associated poliomyelitis in countries that use the live oral poliovirus (OPV) vaccine. The OPV vaccine is acknowledged to be “genetically unstable” and capable of evolving “in the human intestine to regain the neurovirulence and replication characteristics of its parental wild-type strains.” Studies in countries such as Ghana and China have identified vaccine-derived poliovirus in children with paralysis in regions with high OPV coverage—while labeling the children’s illness AFP rather than polio.

Indian researchers recently described the relationship between rates of “non-polio acute flaccid paralysis” (NPAFP) and the country’s practice of “pulse polio immunisation” (periodic OPV vaccination of all children under age five). The number of polio rounds “had a high correlation with the NPAFP rate,” and the mortality rate in NPAFP patients was “twice the mortality rate for wild polio.” When the researchers calculated “the number of paralyzed children each year which exceeded the expected numbers” for the period from 2000–2017, they found that there were “an additional 491,000 paralyzed children” above the expected number of 149,000. Given the strong association of non-polio paralysis “with the number of OPV doses delivered,” the researchers intriguingly speculated that:

“…repeated doses of the live vaccine virus delivered to the intestine may colonize the gut and alter the viral microbiome of the intestine, and this can result in strain shifts of enteropathogens. It is possible that new neurotropic [i.e., preferentially attacking the nervous system] enteroviruses colonizing the gut may induce paralysis.”

Avoiding the “P” word and the “V” word

The United States uses the inactivated poliovirus (IPV) vaccine, which does not colonize in the gut. IPV, therefore, cannot cause viral strains to shift in the manner hypothesized by the Indian researchers in connection with the OPV vaccine. However, there are many other reasons to suspect vaccine-related mechanisms of causation for AFM in the U.S., a primary one being that the scientific literature has documented paralysis as an adverse reaction to vaccination for decades! A 1950 report in The Lancet describing a poliomyelitis outbreak in Australia observed a relationship between paralytic polio and prior pertussis vaccination, and a “considerable increase in the severity of the paralysis in the last inoculated limbs of those children under three who received an injection…within thirty-five days of the onset of poliomyelitis.” A survivor of the outbreak who learned of the Lancet paper discovered that the report had been buried due to “fears of a backlash against immunisation.”

In a recent eNewsletter, retired family physician Dr. Gary Kohls painstakingly outlines studies describing post-vaccination paralysis, several published quite recently (1998, 2003, 2013, 2014, 2016). He also quotes retired pediatrician Allan Cunningham, who discussed the well-known phenomenon of paralytic polio following intramuscular vaccination in a letter to The BMJ in 2015—and, apropos of AFM, stated, “If a polio-like virus is circulating in the U.S., the possibility of its provocation by one or more vaccines has to be considered.”  Cunningham explained:  “It is taboo to suggest a role for vaccines, but some old-timers remember ‘provocation poliomyelitis’ [PP] or ‘provocation paralysis’…following intramuscular injections, typically with vaccines. PP was most convincingly documented…during the 1949 British polio epidemic when the risk of paralytic polio was increased 20-fold among children who had received the DPT injection…. Similar observations were made…in New York City; their literature review cited suspected cases as far back as 1921.”

A 2018 case report of a five-year-old AFP patient in Taiwan noted that the child “experienced sudden onset of acute flaccid paralysis (AFP) involving left arm after fever and respiratory symptoms for 3 days” [emphasis added]. However, the case report—and the many news stories about AFM—have all omitted any mention of the sick and deceased children’s recent vaccinations.

A decade ago, Chinese virologists described the brain stem as a major target of infection with EV71 (one of the two enteroviruses suspected of causing polio-like paralysis), but they noted that prior research had not defined the enterovirus’s “neurotransmission route.” In their research with mice, these investigators found that intramuscular injection of EV71 “resulted in brain infection, flaccid paralysis, pulmonary dysfunction, and death of 7-day-old mice.” The study, which compared intramuscular injection to oral administration of EV71, also observed that the mice were “remarkably more susceptible” to intramuscular versus oral inoculation. Building support for a “retrograde axonal transport theory,” the researchers hypothesized that EV71 spreads “from muscle to [central nervous system] through neuronal pathways as well as the bloodstream at certain times during infection.” Retrograde axonal transport could also explain how injections given at the time of an infection can create an opportunity for bacteria or viruses to enter into the brain.

Most IPV vaccines in the U.S. are aluminum-containing combination vaccines. French researchers have shown that aluminum particles in vaccines play a key role in another mysterious on-the-rise condition called macrophagic myofasciitis (MMF). The MMF researchers have stated that when “poorly biodegradable aluminum-coated particles [are] injected into muscle,” they can subsequently “disseminate…throughout the body and slowly accumulate in [the] brain.” Studies in animals have shown that aluminum-containing vaccines contribute to “a neurodegenerative process…of the gray matter of the spinal cord” and to “hindlimb paralysis” and other neuropathological changes.

…instead of asking hard questions about post-vaccination paralysis, the pharmaceutical industry is developing more vaccines.

Disturbingly, AFM seems to display a unique pattern of weakness and a stubborn lack of response to standard treatments as compared with more “traditional” forms of spinal cord inflammation. In a 12-country study by European researchers of 29 cases of AFM, two of the 29 patients died and full recovery was “rare” in those who survived. Yet instead of asking hard questions about post-vaccination paralysis, the pharmaceutical industry is developing more vaccines. Buttressed by a rushed consensus that EV-D68 and EV-A71 are the dangerous viruses du jour and “the principal causes of AFP,” the industry has already developed an “effective” EV-A71 vaccine, while “an EV-D68 vaccine could be on the horizon.” If the vaccines that children are already receiving are found to be playing a causal role in helping these enteroviruses to get into the brain or causing paralysis via other mechanisms, the pharmaceutical industry and public health officials might find themselves in a public relations quandary. Instead, therefore, we get linguistic games that go so far as to describe AFM as “polio-like” but dare not utter the word “polio” or “vaccine.”