Children and teen vaccination rates began plummeting with the onset of the pandemic, and as concerns surfaced around the safety of COVID-19 vaccines, some parents also began questioning the need for the long list of other vaccines recommended by public health officials. 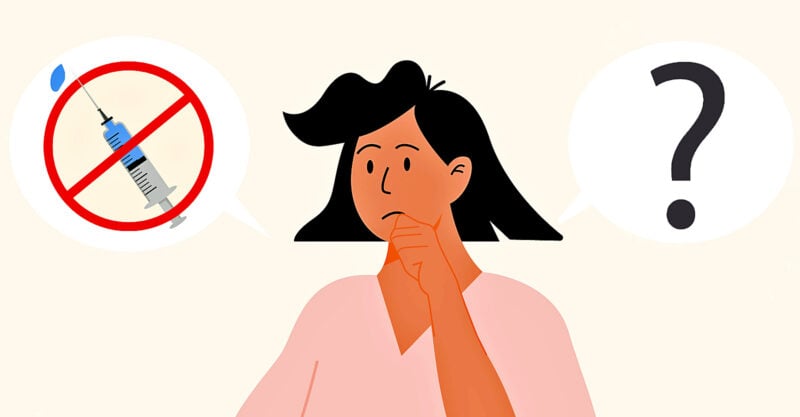 In 2020, government orders to stay home — along with lockdown-produced job losses, public fear of COVID-19 and other factors — led to dramatic declines in in-person utilization of healthcare services among adults and children, both in the United States and globally.

“Well-baby” and “well-child” visits were some of the noteworthy casualties.

In the U.S., children’s and teen’s vaccination rates plummeted dramatically, falling that year by as much as 91% depending on the age group, including a noticeably lower uptake of diphtheria, tetanus and pertussis vaccines (DTaP or DTP), meningitis shots and human papillomavirus (HPV) vaccines.

Public health officials expected this “pandemic hangover” to dissipate by 2021, but instead, the change in parents’ vaccine-seeking behavior for their kids persisted.

Internationally, 6 million fewer children worldwide got at least one dose of DTP vaccine in 2021 versus 2019, causing the head of UNICEF to lament “the largest sustained drop in childhood immunization in a generation.”

And in the Philippines — where the president threatened to jail COVID-19 vaccine refusers — 2021’s percentage of children receiving a first DTP dose was just 57% versus 92% a decade previously.

Stateside, Washington State reported flu shot uptake in children under age 5 was down by around 25% in November 2021, compared to the two previous flu seasons. And Michigan’s state registry for March 2022 showed that 24% fewer toddlers “were considered vaccinated” compared to March 2020.

When Michigan compared its 2020 vaccination data against the 2016-2019 period, it found vaccination coverage had declined in “all milestone age cohorts, except for birth-dose hepatitis B coverage.”

At this juncture, state officials are openly speculating that COVID-19 shots — thus far rejected by the parents of 97% of under-5-year-olds — are the reason parents are increasingly ambivalent about childhood vaccination more generally.

Referring to this “spillover doubt,” a Michigander public health spokesperson said parents who once accepted childhood vaccination without question are now saying, “Wait a minute. Do I really need these vaccines?” and asking, “How are these vaccines made?”

According to another Michigan official, “vaccination” — the “V-word” — has become a “trigger word” for irate parents who believe government not only overstepped its authority during COVID-19 but is fraudulently pushing unsafe vaccines on their little ones.

Fewer babies dying is no ‘disaster’

In October 2020, three scientists from the U.S. and U.K. authored the Great Barrington Declaration and condemned — quite gloomily — the steep decline in childhood vaccination resulting from COVID-19 lockdowns.

As long-time proponents of vaccination — professionally involved in vaccine development, promotion of the dangerous HPV vaccine and accepting of COVID-19 vaccines as a solution to lockdowns — the three declaration authors positioned the decline in childhood vaccination rates at the head of their list of “disastrous” lockdown consequences.

Far from witnessing a disaster, however, observers by June 2020 had begun noticing a wonderful silver lining — a “surprising” pandemic effect on the death rate among infants, in particular, with 200-plus fewer infants dying per week, amounting to a 30% reduction in expected child deaths within a few months.

To explain the “something mysterious” saving the lives of infants, these analysts, along with Children’s Health Defense (CHD) Chief Scientific Officer Brian Hooker, pointed out how the missed infant vaccines coincided with a “precipitous drop” in reports of sudden infant death syndrome (SIDS) to the Vaccine Adverse Event Reporting System (VAERS).

SIDS deaths — which by definition affect children who are normal and healthy — and sudden unexplained deaths in children over age 1 typically occur in close temporal proximity to vaccination, with nine out of 10 SIDS deaths following two- and four-month “well-baby” visits.

Japanese pathologists who identified SIDS cases taking place within a week of vaccination agree that “suspicious cases do exist,” leading them to encourage forensic pathologists to “devote more attention to vaccination” in SIDS events.

However, because the effects of vaccination are complex, cumulative and synergistic with other toxic exposures — and because most chronic disease data sets have not yet caught up to the pandemic — it is not so easy to tease out other upsides resulting from 2020’s lower childhood vaccination rates.

There are a few clues, however.

Consider the decline in emergency department (ED) visits and the fact that the largest declines were in persons under age 15.

Ordinarily, an estimated one in seven children experiences an ED visit every year.

Although there is no surefire way to know why ED visits declined for those specific conditions, all of the diagnoses in question show up in vaccine package inserts as post-vaccination occurrences — along with nearly 400 other acute and chronic symptoms and conditions.

Acute pancreatitis has followed receipt of hepatitis A and B, HPV, influenza and measles-mumps-rubella (MMR) vaccines, among others, in toddlers, adolescents and adults.

And case reports are now flooding in (for example, from the U.S., Japan, Poland and New Zealand) describing severe pancreatitis in the aftermath of COVID-19 vaccination.

COVID vaccines — a line in the sand?

Most observers attributed the sudden drop-off in routine childhood vaccination in 2020 purely to circumstance-imposed foregone care (“the gap between perceived need and actual utilization of healthcare services”).

Now, however, it is COVID-19 vaccines — and particularly the unscientific authorization of the jabs for teens and young children — that appear to be the principal reason many parents no longer “perceive a need” to rush back into the vaccine fold.

Even the propagandistic New York Times admitted to a hardy new contingent of vaccine “skeptics” whose questioning was forged in the crucible of COVID-19 restrictions, COVID-19 vaccine mandates and, tragically for some, a child’s adverse reaction to the COVID-19 shots.

As a physician tweeted from the “frontlines of medicine” in early August, “Parents are DONE with giving their kids any and all [syringe emoji]. Not only that but they’re disgusted with what they had already allowed to be injected into their kids. They wish they could turn back.”

Want to know what I’m experiencing on the frontlines of medicine? Parents are DONE with giving their kids any and all 💉. Not only that but they’re disgusted with what they had already allowed to be injected into their kids. They wish they could turn back ⏰.

Public health’s tired old strategy for recapturing these wayward parents appears to be (surprise, surprise) badgering parents to “catch up as many vaccines as possible in a single visit” — bolstered by the false claim that it is to a child’s advantage to get a bunch of shots at once — while also stoking worries about a resurgence of so-called “vaccine-preventable” illnesses.

Thus, following a single case of paralysis ascribed to “polio,” New York State is busily trying to conjure up a polio outbreak, never mentioning the decades of manipulation of the “polio” diagnosis intended to mask nonviral causes of paralysis that include vaccination and poisoning.

Florida, meanwhile, is urging college students and other groups to get meningococcal vaccines following the deaths of seven gay and bisexual men, allegedly from meningococcal disease.

Why did the deceased men develop meningitis to begin with? No one has shared information about their COVID-19 vaccination status, but researchers around the world are reporting meningitis as a post-COVID-vaccination adverse event in adolescents and adults — for example, in Japan, Singapore, Korea, Iraq, Belgium and Germany.

Meningitis also is a listed adverse event for DTaP, hepatitis A and B, influenza and MMR vaccines, and vaccines containing Haemophilus influenzae type b (Hib) and polio components.

And a 28-year-old physician who volunteered in Brazil’s clinical trials for AstraZeneca’s COVID-19 vaccine died after receiving the meningitis vaccine given to the “control group.”

Sadly, whatever temporary or longer-lasting silver lining may have emerged from the COVID-19-induced lull in childhood vaccination, children and their parents still face many challenges.

According to a Centers for Disease Control and Prevention study, the weight status of children and adolescents who were already overweight or obese worsened significantly during 2020, and children’s food insecurity is rising both domestically and internationally.

In addition, the massive social and behavioral changes commanded through government restrictions have prompted dire headlines about young people’s mental health — although experts caution these could counterproductively lead to overdiagnosis and overmedication with black-box-warning drugs known to cause violence and suicide.

Rather than more vaccines or drugs that have never delivered on their hype or promises, what children and youth need to thrive are the slower-but-surer public health fundamentals — such as solid nutrition, safe housing and economic security — and the loving attention of their parents.