Reuters is now in the business of “fact-checking” Facebook and Twitter posts about COVID vaccines — despite having ties to Pfizer, World Economic Forum and Trusted News Initiative. 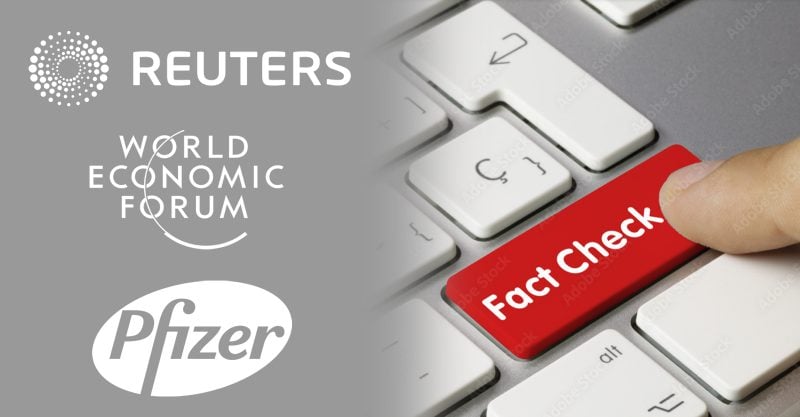 That’s not news — most social media users are aware of the practice, especially amid recent headlines citing increased pressure from Congress and the White House to aggressively crack down on “vaccine misinformation.”

But here’s a less-publicized fact some social media users — and consumers of online news — may not know: Reuters, owned by the $40 billion international multimedia company, Thomson Reuters Corporation, is also in the business of “fact checking” social media posts.

Reuters publishes its fact-checking commentary online in a format designed to resemble new stories, which turn up in online searches.

Last week, Reuters announced a new collaboration with Twitter to “more quickly provide credible information on the social networking site as part of an effort to fight the spread of misinformation.”

However, when announcing its fact-checking partnerships with Facebook and Twitter, Reuters made no mention of this fact: The news organization has ties to Pfizer, World Economic Forum (WEF) and Trusted News Initiative (TNI), an industry collaboration of major news and global tech organizations whose stated mission is to “combat spread of harmful vaccine disinformation.”

Reuters also failed to provide any criteria for how information would be defined as “misinformation” and did not disclose the qualifications of the people responsible for determining fact versus false or misleading “misinformation.”

Physician kicked off LinkedIn for calling out Reuters’ ties to TNI, Pfizer, WEF

Dr. Robert Malone, a physician and inventor of mRNA vaccines and RNA drugs, said he thinks anyone reading Reuters “fact check” articles about COVID-related content should know about, as Malone says, the obvious conflicts of interest.

On June 28, Malone tweeted this:

regarding the “Trusted News Initiative” and censorship of information regarding COVID vaccine safety, please be aware of the link between Pfizer and Reuters. I would call that a journalistic conflict of interest. What do you think? pic.twitter.com/qQCysxnPX6

In the tweet, Malone showed the LinkedIn profile of Jim Smith:

“Jim Smith, who sits on Pfizer’s board, is also former president and current chairman of the Thomson Reuters Foundation, and CEO and director of Reuters parent company, Thomson Reuters Corporation — a $1.53 billion publicly traded “provider of financial information … to businesses, governments and individuals worldwide.”

Twitter didn’t censor or remove the post. But when Malone posted the same information on LinkedIn, he was banned from the platform the next day for violating LinkedIn’s “User Agreement and Professional Community Policies against sharing content that contains misleading or inaccurate information.”

LinkedIn was purchased in 2016 for $26.2 billion by Microsoft, when the company’s co-founder Bill Gates was still at the helm. Microsoft’s COO and corporate vice president, Kirk Koenigsbauer, also serves on the board of Thomson Reuters.

Gates, who is set to profit substantially from COVID vaccine sales, still owns stock in Microsoft — about $5.1 billion, according to recent estimates. In March, Gates stepped down from Microsoft’s board, but he continues to serve as technology adviser to the tech firm’s CEO, Satya Nadella.

Malone’s LinkedIn profile was eventually restored, but only after a series of emails, initiated by Malone, between him and LinkedIn executives.

In an interview last week with The Defender, Malone discussed his Twitter and LinkedIn posts — why he made them, the reactions they elicited and why it matters that Reuters is partnering with social media companies to call out what its fact-checkers decide is “misinformation.”

“I was a little bit tongue and cheek with the question,” Malone said. “But if you go back to the LinkedIn post, there were a huge number of responses to it where people were unanimously saying this is absolutely a conflict of interest.”

“What we have here is this horizontal integration across pharma, big tech, big media, government and traditional media. It’s not just the Trusted News Initiative. It goes beyond. The same thing is true with Merck and all the others. Pfizer is really playing quite aggressively here.”

In addition to the conflicts of interest Malone identified in his Twitter and LinkedIn posts, Malone said it’s the lack of transparency — whether on the part of Reuters, Facebook or TNI — around who defines “misinformation,” based on what criteria, that is concerning to him.

Malone told The Defender, based on his research, most fact checkers don’t have a background in science or health. Yet even without such qualifications, and without working off of a transparent definition of “misinformation,” fact checkers are able to shut down online communication between scientists and physicians by flagging or deleting posts.

Overwhelming pressure from governments and the public has compelled social media platforms to take unprecedented action on what users share online in the pandemic. But who fact checks the fact checkers? #TheDefender https://t.co/AMiP3PQMGI

“How is this in the public’s best interest?” Malone asked.

Reuters, the Trusted News Initiative and their social media partners

Reuters and the Reuters Institute of Journalism are members of TNI, whose stated purpose is to “protect audiences and users from disinformation, particularly around moments of jeopardy, such as elections.”

In December 2020, TNI said in a press release it was expanding its focus to combat the spread of harmful vaccine disinformation and conspiracy theories as public confidence in vaccines was crucial to the vaccines’ adoption and success.

“With the introduction of several possible new COVID-19 vaccines, there has been a rise of ‘anti-vaccine’ disinformation spreading online to millions of people.

“Examples include widely shared memes which link falsehoods about vaccines to freedom and individual liberties. Other posts seek to downplay the risks of coronavirus and suggest there is an ulterior motive behind the development of a vaccine.

“TNI partners will alert each other to disinformation which poses an immediate threat to life so content can be reviewed promptly by platforms, whilst publishers ensure they don’t unwittingly republish dangerous falsehoods.”

Although the TNI press release did offer what it called examples of “anti-vaccine disinformation,” it did not provide a comprehensive list of criteria for how it would define misinformation.

The press release did state this: “ … it is vital that audiences know they can turn to sources they trust for accurate, impartial information” — without disclosing that a member of Pfizer’s board, Jim Smith, is also chairman of Thomson Reuters Foundation, a TNI member.

As Malone pointed out in his Twitter and LinkedIn posts, Smith was appointed to Pfizer’s board in 2014.

According to Pfizer’s website, Smith is a member of the board’s audit committee and chair of the compensation committee, which among other responsibilities, establishes annual and long-term performance goals and objectives for Pfizer CEO Albert Bourla, and determines compensation for Bourla and the executive leadership team.

But Smith also serves as chairman of the Thomson Reuters Foundation, which describes itself as “the corporate foundation of Thomson Reuters, the global news and information services company.”

According to its website, the foundation supports “local media to produce accurate, impartial and reliable journalism that bolsters government and business accountability and ensures public access to information.”

The foundation says it also trains “reporters around the world, promoting integrity, independence and freedom from bias in news reporting.”

But as Malone pointed out, Reuter’s fact-checking initiative regularly “fact-checks” content pertaining to COVID vaccines — including Pfizer’s vaccine — even though Smith sits on Pfizer’s board while also serving as chairman of the Thomson Reuters Foundation.

Connecting the dots between Pfizer, Reuters and the WEF

According to Smith’s LinkedIn profile, while serving on the boards of Pfizer and Thomson Reuters Foundation, he also sits on the board of the WEF’s Partnering Against Corruption Initiative, and is a member of the WEF’s International Business Council.

The WEF was founded in 1973 by Klaus Schwab, an 82-year-old German economist who introduced the idea of “stakeholder capitalism” — a model that positions private corporations as trustees of society.

According to its website, the Switzerland-based nonprofit is “the International Organization for Public-Private Cooperation.” The WEF website also states it “is independent, impartial and not tied to any special interests.”

Yet also according to the WEF website, its partners include: Pfizer, AstraZeneca, Johnson & Johnson, Moderna, Facebook, Google, Amazon, Bill & Melinda Gates Foundation and news organizations like TIME, Bloomberg and The New York Times.

The WEF — and its partners — are part of a global agenda called “The Great Reset” that used the COVID pandemic to call for a “reset” of the global economy and a complete overhaul of the global population’s way of life.

Promoters of The Great Reset frame the plan as “sustainable development” and “stakeholder capitalism,” but critics of the plan say it seeks to monitor and control the world through digital surveillance, is opposed to capitalism and free enterprise, and wants to replace free society with technocracy.

WEF also partners with TPG, a leading global investment firm; Neilson, an information, data and measurement firm; McKinsey and Company, a partner of the global, information and technology practice; and the Blackstone Group.

On June 14, the Thomson Reuters Foundation appointed Yasir Khan as editor-in-chief to lead its team of reporters and oversee the digital transformation of its news offering. In a press release, the foundation said it expanded its news and digital team with funding from the Skoll Foundation — also a member of WEF.

In 2018, Reuters announced a strategic partnership with Blackstone. As part of the transaction, Thomson Reuters sold a 55% majority stake in its financial and risk business — one of the world’s largest providers of financial markets data and infrastructure — to private equity funds managed by Blackstone, valuing the business at $20 billion.