Young males are more likely to report heart damage following vaccination with an mRNA COVID-19 vaccine, and the damage is more likely to be reported after the second dose, according to researchers who reviewed the scientific literature and vaccine injury databases in the U.K., EU and U.S. 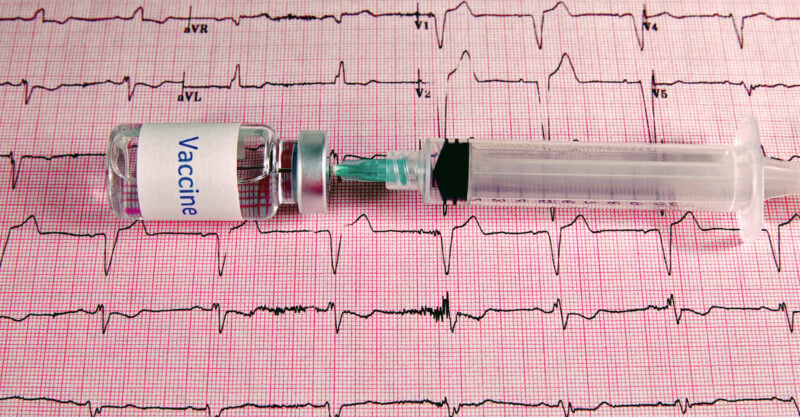 Young males are more likely to report heart damage following vaccination with an mRNA COVID-19 vaccine, and the damage is more likely to be reported after the second dose, according to research published May 25 in The BMJ.

The researchers based their conclusion on a systematic review of scientific literature and of vaccine injury data collected by passive reporting systems in the U.K., Europe and U.S.

The goal of the systematic review was to better understand risk factors for developing myocarditis and pericarditis following vaccination with Pfizer-BioNTech and Moderna COVID-19 vaccines.

The Pfizer-BioNTech and Moderna vaccines were promoted extensively worldwide for use against COVID-19.

Many countries have started booster campaigns, “yet these are the first in their class of vaccines to be approved for use, and as such continued monitoring of their safety is required,” the authors of the review said.

By June of last year, both Pfizer and Moderna included a brief warning about heart damage in their Emergency Use Authorization fact sheets for vaccine recipients.

For purposes of the systematic review, the researchers used the U.K. Yellow Card scheme, the U.S. Vaccine Adverse Event Reporting System (VAERS) and the EU’s EudraVigilance. The cut-off date for the searches on cases was mid-March 2022.

For the scientific literature review, the researchers searched PubMed/MEDLINE and Embase up to March 15. They identified records and then removed records that did not fit their eligibility criteria, leaving 32 peer-reviewed studies.

Overall, 18,204 reports of myocarditis and pericarditis were submitted to U.K., U.S. and EU regulators during the study period, beginning when the mRNA vaccines first rolled out until mid-March 2022.

In the U.K., there were 1,260 events following Comirnaty and 325 events after Spikevax reported to the U.K.’s Yellow Card scheme. As of March 16, 2022, it was estimated that 26.2 million first doses and 23.6 million second doses of Comirnaty were administered in the U.K.

The authors calculated there were approximately 48.09 cases of myocarditis and pericarditis per 1 million vaccinees who had received at least one dose of Comirnaty.

For Spikevax, approximately 1.6 million first doses and 1.5 million second doses of Spikevax were administered in the U.K. Of those who received at least one dose, 203.13 cases of myocarditis and pericarditis were reported per 1 million vaccinated individuals.

In the EU, 9,211 events following Comirnaty and 2,786 following Spikevax were reported to EudraVigilance.

Approximately 296.05 million people received at least one dose of Comirnaty and approximately 46.56 million received a first dose of Spikevax.

There were 13,573 events of myocarditis and/or pericarditis reported in the observational studies included in the systematic review of the literature, but these cannot help to calculate the overall rate of these adverse events.

The authors concluded from the above that, “while reporting rates for myocarditis and pericarditis have differed between the spontaneous reporting databases, overall, they demonstrate that these events are very rare (defined as occurring at a rate of less than 1 in 10,000).”

The authors cited the British National Formulary website for guidance on what is considered a “rare” versus a “very rare” adverse event, but this website is available only to users in the U.K.

The authors reported myocarditis and pericarditis in terms of cases per million, but the determination of whether an adverse event is considered rare or very rare is given as cases per 10,000.

Even without factoring in underreporting, the reported rate of myocarditis and pericarditis for those who received Spikevax in the U.K. was 203.13 cases per 1 million vaccinated individuals, which is “rare,” not “very rare.”

Myocarditis and pericarditis are serious adverse events that might be more likely to be reported to a passive reporting system.

Therefore, when considering the myocarditis and pericarditis rates presented in this systematic review, it is important to remember they are reported rates, not the true rate in the population.

Given the above about under-reporting to passive VAERS, the true rate may be 1.3 to 100 times higher.

In addition, the above rate is for the general population, not the rate for the most at-risk population, young males.

The authors also said, “Conversely, greater reporting may have occurred due to the public interest in adverse reactions linked with COVID-19 vaccines, thus, analysis of multiple data sources was used here to overcome these potential limitations.”

A higher percentage of males experiencing heart damage after an mRNA shot was also reported in the literature. The authors calculated that on average, 60.31% of myocarditis and/or pericarditis events following COVID-19 mRNA vaccines occurred in males (the range was from 50% to 100%).

“Due to differences in study design it was not possible to determine the age group most susceptible to myocarditis and pericarditis from the literature as some studies were focused on adults only or children only meaning appropriate comparisons could not be carried out.”

The authors did not provide the rate of myocarditis and pericarditis in young males.

Other studies calculated the rate using the VAERS database, such as a study published in February 2022 in the European Journal of Clinical Investigation (EJCI), which calculated the risk-benefit for vaccination with Comirnaty (BNT162b2) in adolescents.

Even without calculating the approximate true rate of heart damage, versus the reported rate, their risk-benefit analysis suggested that among 12- to 17-year-olds, two-dose vaccination was not recommended for most teens, except for non-immune girls (girls who did not have natural immunity to COVID from prior infection) with comorbidity.

Further, “in boys with prior infection and no comorbidities, even one dose carried more risk than benefit according to international estimates.”

The authors of the EJCI study recommended individualized pediatric COVID-19 vaccination strategies that weigh protection against severe COVID-19 against the risks of vaccine-associated myocarditis and pericarditis.

Reports to the passive monitoring systems were more frequent after the second dose of an mRNA vaccine (47.1% of reports, where data was available).

This data from the passive monitoring systems is consistent with the 32 studies included in the systematic review, which showed that 64.72% of the cases were reported after the second dose (with a range of 25.00% to 91.78%).

The authors of the review noted that in all three spontaneous reporting systems and for both of the mRNA vaccines, the reporting rate of myocarditis was higher than that of pericarditis.

“This may be true, or it may also reflect that the diagnosis of myocarditis is relatively more straightforward,” they wrote.

In the U.K. and EU, the reporting rates of myocarditis and pericarditis were higher following Spikevax compared with Comirnaty.

However, this was not observed for the U.S., where heart damage after Comirnaty was slightly more frequent than after Spikevax.

The authors noted that a full dose of Spikevax used for first and second doses contains 100 μg of mRNA nucleotides, whereas a full dose of Comirnaty contains a third of that dose, 30 μg of the mRNA material.

“This is one possible reason for the higher reporting rate of myocarditis and pericarditis observed for Spikevax in the U.K. population,” they said.

The authors wrote that a half-dose of Spikevax (50 μg) is used for booster doses, which is still more RNA material than in Comirnaty.

“Therefore, it will become increasingly important as more people receive third and subsequent booster doses of mRNA COVID-19 vaccines to monitor the frequency and severity of myocarditis and pericarditis following exposure to these vaccines,” they said.

All three co-authors of the systematic review hold positions at the U.K. Drug Safety Research Unit.

The “competing interests” section of the review states:

“The Drug Safety Research Unit (DSRU) is a registered independent charity (No. 327206) associated with the University of Portsmouth. The DSRU receives donations and grants from pharmaceutical companies; however, the companies have no control over the conduct or publication of its studies.”

In their conclusion, the authors wrote:

“It is important that regulatory authorities continue to monitor the effects of mRNA vaccines on the heart, particularly as vaccine programmes progress to include younger vaccinees in many parts of the world.”

They also stated that the cases of heart damage are “typically mild, with full recovery in most cases.”

But as reported previously in The Defender, University of British Columbia professor Dr. Steven Pelech stated in August, “Contrary to what a number of people have said, there is no such thing as ‘mild myocarditis.’”

In addition, two-thirds of adolescents with mRNA vaccine-related myocarditis or pericarditis had persistent heart abnormalities months after their initial diagnosis, raising concerns for potential long-term effects and again contradicting claims that the condition is “mild.”