A new peer-reviewed study shows more than two-thirds of adolescents with COVID-19 vaccine-related myopericarditis had persistent heart abnormalities months after their initial diagnosis, raising concerns for potential long-term effects and contradicting claims by health officials that the condition is “mild.” 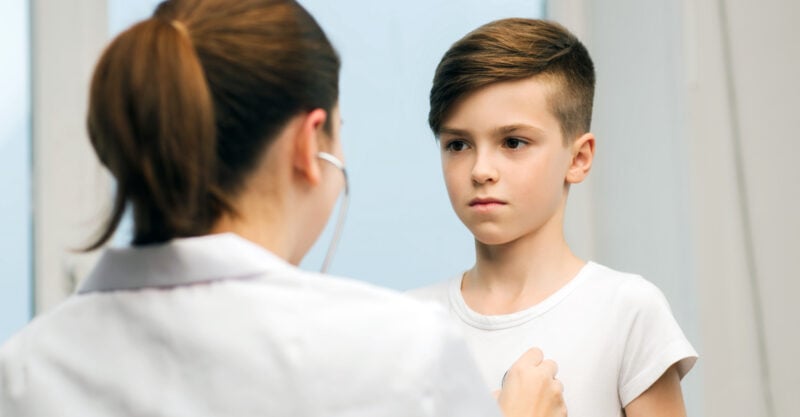 The findings, published March 25 in the Journal of Pediatrics, challenge the position of U.S. health agencies, including the Centers for Disease Control and Prevention (CDC), which claim heart inflammation associated with the Pfizer and Moderna mRNA vaccines is “mild.”

Researchers at Seattle Children’s Hospital reviewed cases of patients younger than 18 years old who presented to the hospital with chest pain and an elevated serum troponin level between April 1, 2021, and Jan. 7, 2022, within one week of receiving a second dose of Pfizer’s vaccine.

While 35 patients fit the criteria, 19 were excluded for various reasons. Cardiac magnetic resonance imaging (MRI) of the remaining 16 patients was performed three to eight months after they were first examined. The MRIs showed 11 had persistent late gadolinium enhancement (LGE), although levels were lower than in previous months.

According to the study, “The presence of LGE is an indicator of cardiac injury and fibrosis and has been strongly associated with worse prognosis in patients with classical acute myocarditis.”

In a meta-analysis of eight studies, LGE was found to be a predictor of all-cause death, cardiovascular death, cardiac transplant, rehospitalization, recurrent acute myocarditis and requirement for mechanical circulatory support.

Similarly, an 11-study meta-analysis found the “presence and extent of LGE to be a significant predictor of adverse cardiac outcomes.”

Researchers said that while symptoms “were transient and most patients appeared to respond to treatment,” the analysis showed a “persistence of abnormal findings.”

The results “rais[e] concerns for potential longer-term effects,” researchers wrote, adding that they plan to repeat imaging at one year after the vaccine to assess whether abnormalities have resolved.

“All patients had significantly elevated serum troponin levels indicative of heart damage. And LGE, which is indicative of poor outcome, was present in more than two-thirds of the kids.”

“These young patients had a median troponin level of 9.15 — more than 20 times greater than the levels found in people suffering heart attacks,” Setty said.

Dr. Anish Koka, a cardiologist, told The Epoch Times the study suggests 60% to 70% of teenagers who get myocarditis from a COVID vaccine may be left with a scar on their heart.

“Certainly, children who had chest pain severe enough to merit seeking medical attention need to at least make sure they get a follow-up MRI,” Koka said, adding that the findings “should have clear implications for the discussion around vaccines, especially for high-risk male teenagers … and definitely for vaccine mandates.”

Both Pfizer and Moderna COVID vaccines have been linked to several forms of heart inflammation, including myocarditis and pericarditis.

Myocarditis, or inflammation of the heart, is a severe and life-shortening disease. It was virtually unknown in young people until it became a recognized side effect of mRNA COVID vaccines, especially in boys and young men.

Pericarditis is inflammation of the pericardium, a sac-like structure with two layers of tissue that surrounds the heart to hold it in place and help it work.

According to the CDC, the most at-risk group is 16- and 17-year-old males, who have reported rates of 69 per million after the second dose of Pfizer’s COVID vaccine, although that number is likely underreported.

The CDC presentation also reported that in three-month follow-up evaluations, less than one-third of adolescents 12 to 17 who suffered vaccine-induced myocarditis (reported in Vaccine Safety DataLink) had fully recovered.

The 69-per-million rate the CDC uses to determine the incidence of myocarditis in 16- and 17-year-olds came from the agency’s Vaccine Adverse Event Reporting System (VAERS) — a U.S. government-run database that receives reports of vaccine adverse events.

One of the biggest limitations of passive surveillance systems, like VAERS, is that the system “receives reports for only a small fraction of adverse events,” according to the Department of Health and Human Services website.

A recent study from Hong Kong suggests the incidence of myo/pericarditis after two doses of Pfizer’s Comirnaty vaccine was 37 in 100,000 (370 per million).

This incidence matches nearly exactly with findings from a study that used the Vaccine Safety DataLink system, which showed 37.7 12- to 17-year-olds per 100,000 suffered myo/pericarditis after their second vaccine dose.

This indicates an incidence rate that is almost six times higher than the 69-per-million rate reported by the CDC.

In a preprint study from Kaiser Permanente, the incidence of myocarditis in 18- to 24-year-old males post-vaccination was even higher — at 537 per million, or 7.7 times higher than the statistics reported by the CDC.

No such thing as ‘mild’ heart damage

A paper published Jan. 14 in Circulation summarized the clinical course of 139 young patients between the ages of 12 and 20 who were hospitalized for myocarditis following COVID vaccination.

Of those patients, 19% were taken into intensive care, two required infusions of potent intravenous drugs used to raise critically low blood pressure and every patient had an elevated troponin level.

Troponin is an enzyme specific to cardiac myocytes. Levels above 0.4 ng/ml are strongly suggestive of heart damage.

The paper concluded, “Most cases of suspected COVID-19 vaccine myocarditis occurring in persons <21 years have a mild clinical course with rapid resolution of symptoms.”

“We suppose [a ‘mild clinical course] refers to the 81% who did not go to the ICU or the fact that none died or required ECMO (Extracorporeal Membrane Oxygenation, a desperate means to keep the body oxygenated when a patient’s heart or lungs have completely failed),” wrote Setty and Josh Mitteldorf, Ph.D., a theoretical physicist, in an article critiquing the Circulation paper.

“When does a ‘mild clinical course’ require hospitalization for a two-day median length of stay?” they asked. “How does anyone know if symptoms rapidly resolve?”

“We don’t know what it will do to young boys in the long term, especially since every patient had some damage to their heart as evidenced by significantly abnormal troponin levels,” Setty and Mitteldorf wrote. “And we don’t fully understand the mechanism by which the vaccines cause myocarditis.”