The U.S. Food and Drug Administration on Monday granted full approval of Moderna’s Spikevax COVID vaccine for people 18 and older. Similar to the agency’s licensing last year of Pfizer’s Comirnaty vaccine, the approval raised a number of legal questions. 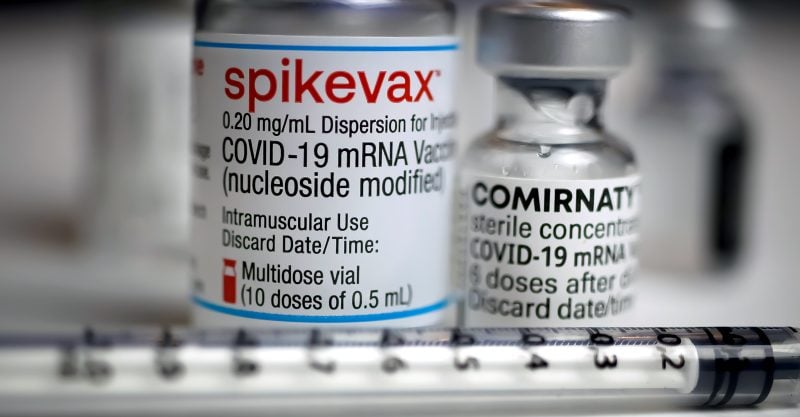 Similar to the agency’s licensing last year of Pfizer’s Comirnaty vaccine, the approval raised a number of legal questions related to mandates and product availability.

Spikevax is a two-dose primary series, approved also for administration as part of a heterologous (“mix and match”) single booster dose for individuals who previously completed their original series of vaccinations with the Pfizer or Johnson & Johnson COVID vaccines.

However, in its approval letter, the FDA said Spikevax is “legally distinct” from the Moderna EUA vaccine:

The FDA made the same distinction between the Pfizer-BioNTech EUA vaccine and the Pfizer Comirnaty vaccine, which the agency fully licensed in August, 2021, a move that raised questions about liability and the legality of vaccine mandates.

After Monday’s announcement, media outlets were quick to reassure the public the two Moderna vaccines are the same and that this was just a marketing ploy, where Moderna simply “rebranded” what is otherwise the same vaccine.

While Moderna’s Spikevax vaccine is now fully licensed, the original Moderna vaccine will remain under EUA. Indeed, the FDA on Jan. 7 reissued the EUA.

The FDA has also made it clear the Spikevax vaccine will not be available to the American public, announcing:

These claims parallel the chain of events that followed the FDA’s full approval of the Pfizer Comirnaty vaccine in August 2021.

At the time, Pfizer and the FDA claimed Comirnaty was not yet available, as there were sufficient stocks of the Pfizer-BioNTech EUA vaccine still available to be administered.

As of this writing, the FDA states, via its website, that Comirnaty products are “not orderable at this time.”

The FDA has not indicated when, or if, the Spikevax and Comirnaty vaccines will be available for distribution in the U.S.

As reported by The Defender, there is a significant legal distinction between products authorized under EUA and those fully licensed by the FDA.

EUA products are experimental under U.S. law. Under the Nuremberg Code and federal regulations, no one can force a human being to participate in this experiment.

Specifically, under 21 U.S. Code Sec.360bbb-3(e)(1)(A)(ii)(III), “authorization for medical products for use in emergencies,” it is unlawful to deny someone a job or an education because they refuse to be an experimental subject. Instead, potential recipients have an absolute right to refuse EUA vaccines.

Notably, on Nov. 12, 2021, a federal judge rejected an argument by the U.S. Department of Defense, in defending the military’s vaccine mandate, that the Pfizer Comirnaty and Pfizer-BioNTech vaccines are “interchangeable.”

U.S. law also requires the EUA designation be used only when “there is no adequate, approved and available alternative to the product for diagnosing, preventing or treating such disease or condition.”

This means that, in legal terms, all EUA products should be withdrawn once alternative products have received full approval.

Perhaps the most significant legal distinction, however, pertains to the legal protections afforded vaccine manufacturers, depending on how their product is classified.

Under such regulations, the only way an injured party can sue is if he or she can prove willful misconduct, and if the U.S. government has also brought an enforcement action against the party for willful misconduct.

No such lawsuit has ever succeeded.

Conversely, fully licensed vaccines, such as Spikevax and Comirnaty, do not have a liability shield, and are instead subject to the same product liability laws as other products.

This means the Spikevax and Comirnaty vaccines could expose pharmaceutical companies to significant financial claims if individuals injured by the vaccines chose to sue the vaccine makers.

The rush to get COVID vaccines authorized for all ages — a ploy to avoid liability?

There’s another reason Pfizer and Moderna don’t want their fully licensed vaccines to be available yet — they’re waiting for the vaccines to be authorized, then licensed, for children as young as 6 months old.

Why? Because once a vaccine is fully licensed by the FDA, the only way its manufacturer can be shielded from legal liability is if the vaccine is added to the Centers for Disease Control and Prevention’s childhood vaccination schedule.

The National Childhood Vaccine Injury Act (NCVIA), passed into law in 1986, provides a legal liability shield to drugmakers if they receive full authorization for all ages and the vaccine is added to the mandatory schedule.

“Are Pfizer and Moderna waiting for full authorization for children’s shots to distribute Comirnaty and Spikevax to the masses? There’s plenty of litigators who have suggested that this is exactly what is going on in Big Pharma world.”

By creating the public perception that the Pfizer and Moderna EUA vaccines are fully approved, businesses, schools and other institutions are emboldened to impose vaccine mandates that violate existing law and allow the vaccines to be administered without informed consent.

It has also been argued that by relabeling the product, any previous data regarding vaccine injuries and side effects identified in association with the EUA vaccine are not counted in the safety studies for the approved vaccine.

The FDA approval of the Pfizer Comirnaty vaccine, its subsequent lack of availability and the continued administration of the Pfizer-BioNTech EUA vaccine led Children’s Health Defense (CHD) to file a lawsuit against the FDA and its acting director, Dr. Janet Woodcock, for their allegedly deceptive and rushed approval of the Comirnaty vaccine, arguing that the approval represented a classic “bait and switch” tactic.

CHD further alleged in its lawsuit that the FDA violated federal law when it simultaneously licensed Pfizer’s Comirnaty vaccine and extended Pfizer’s EUA — as the agency has now done with Moderna and Spikevax — for a vaccine that has the “same formulation” and that “can be used interchangeably,” according to the FDA.

FDA admits no safety data for Spikevax use among pregnant women

Beyond the legal questions raised by the FDA’s approval this week of Spikevax, the approval also raises safety questions.

For instance, the FDA admitted Spikevax was insufficiently tested on pregnant women, stating that “[a]vailable data on SPIKEVAX administered to pregnant women are insufficient to inform vaccine-associated risks in pregnancy.”

And yet, the FDA cited the Omicron variant as the reason behind its decision to pull its EUA for monoclonal antibody products. The FDA claims that these products have not been shown to provide protection against the Omicron variant.