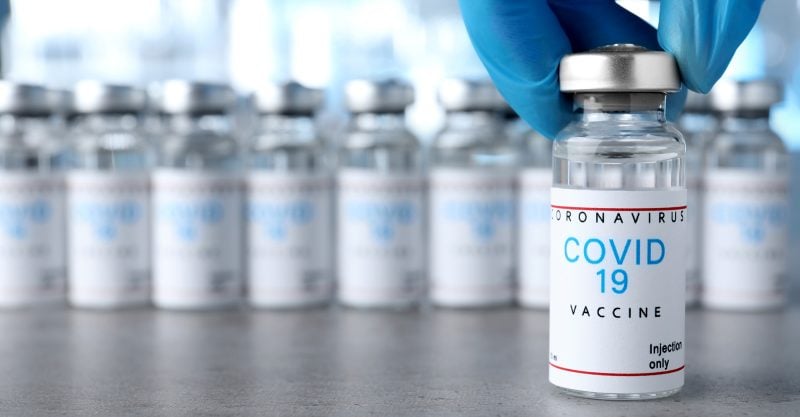 Data released today by the Centers for Disease Control and Prevention (CDC) on the number of injuries and deaths reported to the Vaccine Adverse Event Reporting System (VAERS) following COVID vaccines showed that between Dec. 14, 2020 and March 19, 2021, there were 44,606 reports of adverse events, including 2,050 deaths and 7,095 serious injuries.

In the U.S., 118.3 million COVID vaccine doses had been administered as of March 19. 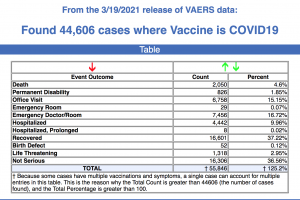 VAERS is the primary mechanism for reporting adverse vaccine reactions in the U.S. Reports submitted to VAERS require further investigation before a causal relationship can be confirmed. Every Friday, the CDC makes public all VAERS vaccine injury reports received as of the previous week.

This week’s VAERS data included 2,306 reports of anaphylaxis. Fifty-five percent of anaphylaxis reports were attributed to the Pfizer-BioNTech vaccine, 45% to Moderna and 1% to the Johnson & Johnson (J&J) vaccine, which was rolled out in the U.S. on March 2.

The latest news report of an anaphylactic reaction to a COVID vaccine was of a 68-year-old Kansas woman who died a day after receiving the vaccine. According to EMS dispatch records, the woman had an allergic reaction at a vaccine clinic site around 4 p.m. on Tuesday, KMBC reported. She had difficulty breathing and speaking and was injected with an EpiPen.

Kansas Department of Health and Environment spokesperson Kristi Zears told The Wichita Eagle that Evans had an anaphylactic reaction during a waiting period after receiving the shot. She was transported to the hospital and pronounced dead a day later. It is not clear whether Evans had underlying health conditions and the Kansas health agency did not indicate which COVID vaccine was administered.

To date, the only information the CDC has published related to the investigation of COVID vaccine-related deaths and how those investigations were conducted is a COVID-19 Vaccine Safety Update via the Advisory Committee on Immunization Practices (ACIP), published on Jan. 27.

As of today, 18 days later, the CDC has not responded or followed up with our calls or emails. We have contacted them numerous times and are either told “they received the email,” “they will escalate it and it is in the system” or their press officers are still reviewing it. After our most recent follow up call this Wednesday and giving them an updated deadline of 48 hours, we still have not heard back.

A look at the numbers

Overall, the data released today reflects trends that have been emerging since The Defender first began tracking VAERS reports related to COVID vaccines.

As The Defender reported Tuesday, Dr. Hooman Noorchashm, cardiothoracic surgeon and patient safety advocate, said we’re taking the COVID pandemic problem — where a half-percent of the population is susceptible to dying — and compounding it by vaccinating people who are already infected. In an interview with Fox News host and political commentator, Tucker Carlson, Noorchasm said public health officials are making a “dramatic error” by promoting a “one-size-fits-all” COVID vaccination program:

“… the signal is deafening, the people who are having complications or adverse events are the people who have recently or are currently or previously infected [with COVID]. I don’t think we can ignore this.”

Noorchashm believes that a #ScreenB4Vaccine campaign could save millions from vaccine injuries. He is promoting a screening campaign that consists of “PCR or Rapid Antigen test to determine if there is an active infection and an IgG antibody test that would allow determination of a past infection. If either of these tests are positive, vaccination ought to be delayed for a minimum of 3 – 6 months,” Noorchasm told The Defender. “If at that time IgG levels are waning, it is reasonable to consider getting a vaccine shot. But even then, blood IgG levels should guide whether or not a person gets vaccinated.”

Noorchasm sent a third communication to the U.S. Food and Drug Administration this week, warning that deaths like that of 32-year-old Benjamin G. Goodman, who died after receiving the Johnson & Johnson vaccine, could have been prevented, and that there will be more deaths unless people are screened before being vaccinated.

An article in The Hill this week, by several physicians, also suggested that people be prescreened for COVID before being vaccinated.

“A closer look at the level of protection obtained by a single shot vaccine regimen for those who are ‘COVID-primed’ is needed. Rigorous, effective and efficient antibody prescreening tools to identify these individuals would be required as well.”

AstraZeneca under fire in U.S. and Europe

As far as individual vaccines, AstraZeneca garnered the most headlines this week, in Europe and the U.S.

On March 22, The Defender reported that two independent research teams in Norway and Germany identified antibodies that provoke immune reactions leading to the type of blood clots experienced by some people who received AstraZeneca’s COVID vaccine.

Although many countries resumed their vaccination program with AstraZeneca’s vaccine after the EMA’s preliminary findings, some countries, including France, Denmark, Norway, Sweden and Finland, did not lift their restrictions on its use.

According to Reuters, Finland announced Wednesday it was still looking into two cases of blood clots but would resume using the AstraZeneca vaccine against COVID for people aged 65 and over. Finland plans to complete its investigation by April 6 at the earliest.

On March 23, U.S. health officials accused AstraZeneca of misrepresenting efficacy data when it included “outdated information” in its clinical trial results, which may have led to the vaccine maker providing the public with an incomplete view of its efficacy data, The Defender reported.

The statement by the National Institute of Allergy and Infectious Diseases came less than a day after the pharmaceutical company said its vaccine was 79% effective against COVID and 100% effective against severe or critical disease and hospitalization.

AstraZeneca released updated information on its COVID-19 clinical trial Wednesday which showed an efficacy rate of 76% against symptomatic COVID infection instead of the 79% figure released Monday. The estimated efficacy in people over 65 rose slightly, from 80% to 85%. The vaccine maker identified no safety concerns related to the vaccine.

On March 24, the Ukrainian government urged the public not to jump to conclusions after a servicewoman died two days after getting the AstraZeneca COVID vaccine, reported Fox News. Although the woman reportedly had chronic cardiovascular disease and other comorbidities, she experienced no side effects from the vaccine before she suddenly lost consciousness.

According to Reuters, nine other people were given the vaccine from the same batch on the same day and had no ill effects.