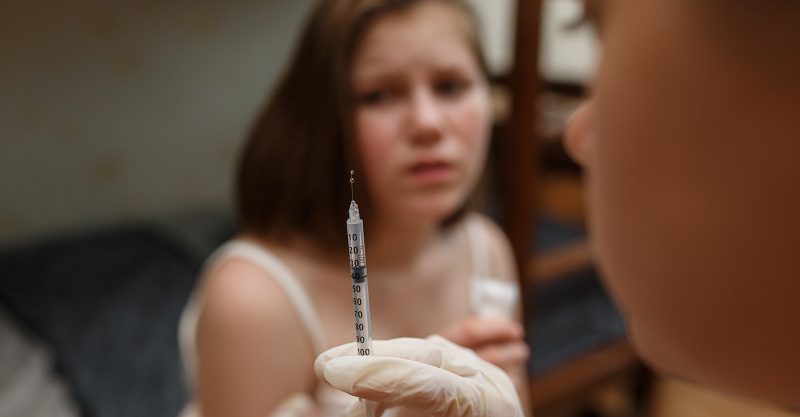 Consumers often have the need to check a product’s ingredients and this is especially true for those with allergies to certain substances. Such access to product information is essential for individuals to protect themselves from harm by exposure to ingredients to which they have known sensitivities. For the most part, such labeling is sufficient for those impacted; however, when the vast majority of the population has a preexisting immune response to an ingredient classified as biologically inert/inactive by our government, that should raise concerns. This is because an immune response or allergic reaction is a major cause of adverse medical events, some of which can be life-threatening (such as in the case of anaphylactic shock).

When this same substance is a key component of a vaccine (a potentially mandated vaccine to combat a worldwide pandemic) our concern should be commensurately raised. When the vast majority of those who have an immune response to the substance do not realize what they are allergic to and therefore cannot reasonably be expected to avoid it, we have the potential for a medical crisis within a medical crisis.

Scientific studies to quantify the seriousness of the problem estimate that approximately 72% of the US population has acquired anti PEG antibodies.

Just what is this dangerous inactive ingredient?

Polyethylene Glycol, otherwise known as PEG, Macrogol, Carbowax and many other names when combined with other substances, is not a household word unless your house holds biochemists. It is classified as biologically inert by our FDA. It is the “Gold Standard” for use in many medications to increase the blood clearance time, or in other words, the time it remains in one’s system, thereby enhancing drug effect. It is also used in drug manufacturing as an excipient for long term stabilization, bulking, and other therapeutic enhancements. It is used as a coating to prevent bacterial adhesion on orthopedic screws and sutures. In addition to medical uses, PEG is also used in cosmetics, foods, industrial applications, and other health and beauty products such as soaps, shampoos, toothpastes. It is also used as an e-cigarette liquid. PEG is everywhere in our environment, which is what many have surmised has led to a high percentage of the US population developing anti-PEG antibodies. This, of course, presents a significant challenge to those who rely on this substance in their manufacturing.

Scientific studies to quantify the seriousness of the problem estimate that approximately 72% of the US population has acquired anti PEG antibodies. The referenced study used blood samples taken from 1990-1999 and earlier, showing a steady increase over time in the percentage of those with antibodies to PEG, making it conservative to estimate, after two decades, that the incidence is closer to 80% today. This circumstance has concerned the medical and pharmaceutical communities as an equally effective alternative has escaped identification, although several have been suggested, and because the great cost of shifting to such an alternative.

Not only is PEG a “stealth” medicinal additive, delaying blood clearance due to its properties, but it is a stealth allergen, the vast majority of the population never having heard of it and many in the healthcare industry being unaware of its antigenic properties. A physician survey found:

“Although 91% of respondents were aware of antidrug antibodies in general, only 22% were aware of APA (Anti-PEG Antibody) responses. Further, there was limited awareness (35%) of PEG’s inclusion in prescribed PEGylated therapeutics.”

The lack of awareness of this issue in the general population and in the health care provider population present unique challenges, one of which we are facing with today’s Covid-19 pandemic.

There are at least three fast-tracked vaccines being produced and tested at this time, obviously meant for widespread use, some even arguing mandatory use, which contain PEG: Moderna’s mRNA1273, and BioNTech/Pfizer’s BNT162b1 and b2. These mRNA vaccines trick your cells into producing Covid-19 proteins—pieces of the virus which are non-infectious. These proteins then elicit an immune response to fight the real virus. They use a pegylated Lipid Nanoparticle (LNP) as the delivery mechanism for the mRNA. Think of the LNP as a miniscule (less than 100 billionth of a meter) bubble containing the mRNA. This “bubble” is coated with PEG (DSPE MPEG2000 in Moderna’s case) to stabilize the carrier and assist it in getting to and into the target cells. PEG assists with the “getting to” portion of the journey by preventing the bubble from breaking down before it reaches its target. That is what some call PEG’s stealth properties—its ability to mask and protect the carrier from the body’s normal defenses against foreign substances.

Two obvious issues are presented by the high percentage of our population having pre-existing antibodies to PEG: safety and efficacy. While it is true that not everyone with pre-existing PEG antibodies will have a severe reaction to a vaccine containing PEG, there is a significant danger that many will. Ideally, the safety and efficacy effects on those with pre-existing antibodies to PEG would be determined in the clinical trials. However, as Moderna’s trial is not pre-screening participants for anti-PEG antibodies they cannot, therefore, characterize the risk. They are flying blind.

Multiple previous studies regarding the prevalence of anti-PEG antibodies in the population have stated that prescreening for these antibodies should be done prior to administration of any PEG containing medication. This is obvious for safety reasons. It is especially important in the case of a desire to vaccinate as many people as possible with a vaccine containing a substance to which the vast majority of the population may unknowingly have antibodies. Also important in this regard, is that it matters, in terms of immunogenicity, what PEG is bound to, the manner in which it is applied to the carrier, its concentration, its molecular weight, etc. Not characterizing trial participants adverse reactions in relation to Anti-PEG Antibody presence and levels forfeits gaining insight into these factors. After all, since taxpayers have paid almost one billion dollars to assist Moderna in getting this vaccine tested and produced the glaring safety risks should at least be evaluated.

As Moderna has stated the proven fact that a high percentage of the population having anti PEG antibodies is “hypothetical,” and they are not screening for it …

Efficacy is also at stake. Accounting for different levels of preexisting anti-PEG antibodies should influence trial procedures. Safety considerations are obvious, but efficacy could be enhanced by slightly altering the protocols for participants with anti-PEG antibodies. The main efficacy concern is accelerated blood clearance due to the body’s defenses recognizing the PEG antigen. It would be helpful to quantify at what titers, or levels, of Anti-PEG Antibody accelerated blood clearance becomes a problem. As Moderna has stated the proven fact that a high percentage of the population having anti PEG antibodies is “hypothetical,” and they are not screening for it, this is another missed opportunity. It was certainly taken into account during the trial of another vaccine that used an Adenovirus as the carrier, so such trial procedures are not unusual.

I am not anti-vaccine. I am pro safe, effective vaccines. It seems some basic safety and efficacy risk mitigation procedures are being ignored. This oversight appears to be intentional as Moderna’s own scientists have made note of the problem. I have a severe anaphylactic response to PEG. Luckily, I identified it and had it confirmed by Johns Hopkins. I am forewarned. But the vast majority of potentially billions of citizens fated to receive the Moderna vaccine are not forewarned. How many will be injured because Moderna failed to investigate a dangerous “inactive” ingredient?