The Pediatric Perils of PEG: From MiraLAX to COVID Shots, FDA and CDC Ignore Safety Signals

Last year, the U.S. Food and Drug Administration warned that some ultrasound contrast agents contain polyethylene glycol (PEG) and therefore shouldn’t be administered to patients with known or suspected allergies to PEG — but there are no similar warnings for adults or children who get PEG-containing COVID-19 shots or MiraLAX, an over-the-counter laxative. 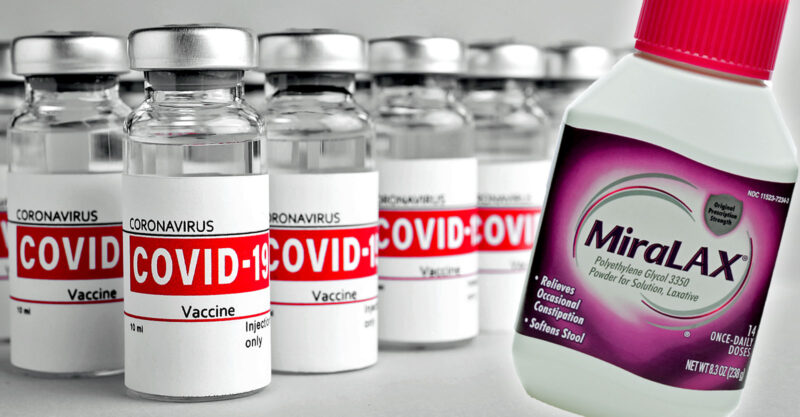 On Oct. 20 — the very same day the Centers for Disease Control and Prevention’s (CDC) crooked vaccine advisory committee members voted to add COVID-19 shots to the Child and Adolescent Immunization Schedule — Indonesia’s Ministry of Health took a bold step in a different direction: It banned the sale and prescription of pediatric cough syrups and other liquid medications, at least temporarily.

The ministry linked the cough syrups to kidney injuries that recently killed almost 100 Indonesian children and nearly 70 children in The Gambia in West Africa, and it voiced the suspicion that those numbers could be the tip of a much larger iceberg.

After the rash of West African deaths, the World Health Organization issued a medical product alert for four brands of cough syrup manufactured in India and imported into The Gambia through a U.S. company — warning of the products’ possibly global distribution and calling for the substandard products’ removal from circulation.

As it happens, the COVID-19 shots promoted by the CDC and the syrups prohibited by the Indonesian ministry have one glaring commonality — both contain the chemical polyethylene glycol (PEG).

Several months before the U.S. Food and Drug Administration (FDA) granted Emergency Use Authorization to Pfizer and Moderna for their PEG-containing mRNA COVID-19 shots, Children’s Health Defense (CHD) put the FDA on notice about PEG’s life-threatening anaphylactic potential — and sure enough, anaphylaxis was among the very first adverse events reported.

When the president of the American Medical Association then asked Peter Marks — director of the FDA center that oversees vaccines — about anaphylaxis, PEG and the COVID-19 shots, his non-answer was, “It’s just one of those intriguing things,” accompanied by a vague promise about “lots of work getting done.”

As it turns out, that cavalier reply has typified regulators’ response to reports of serious PEG-related adverse events for many years — whether it is COVID-19 shots or other drugs that are causing the harms, regulators are content to dilly-dally.

The FDA similarly has brushed off tens of thousands of parents, including the 67,000-plus members of a parent Facebook group, who for decades alleged that laxatives containing a form of PEG called PEG 3350 caused dramatic neuropsychiatric symptoms in their children, ranging from seizures to psychosis.

PEG 3350 is the active ingredient in the drug MiraLAX, originally developed by Braintree Labs and now a Bayer product.

The FDA in 2006 approved the switch from prescription to over-the-counter (OTC) status for MiraLAX.

Though Braintree developed MiraLAX for short-term use in adults, the drug’s OTC availability has encouraged pediatricians to frequently recommend it for constipated children, sometimes for months or years at a time.

Even knowing that children “are likely to receive a higher dose per unit body weight than adults,” no one has ever assessed the risks to children of prolonged exposure to PEG 3350.

However, when the drug received OTC status, FDA reviewer Dr. Karen Feibus acknowledged “a theoretical concern with long term or frequent repeated use of PEG by consumers” (p. 29).

A 2012 citizen petition urged a study on pediatric safety, requesting the FDA study PEG “in any medical product that is being prescribed to children in the United States or sold by US companies for overseas use.”

With its hand forced by the petition, the National Institutes of Health (NIH) in 2014 awarded a $325,000 grant to the Children’s Hospital of Philadelphia to assess PEG 3350 safety in children in collaboration with the FDA — but thus far, the study has gone nowhere.

Though the NIH and FDA initially pledged that results would be available within a year, by late 2022, the study status was still shown as “recruiting” and the completion date was listed as June 2024.

In a September 2022 email to parent Mike Koehler, whose son experienced a serious neuropsychiatric reaction to MiraLAX, FDA Public Affairs Specialist Paul Richards offered more prevarication, writing, “While the FDA and CDC cannot predict how long the review of the data and information will take, we will complete our review as expeditiously as possible using a thorough and science-based approach.”

Known ‘impurities’ are anything but harmless

Manufacturers’ claims that PEGs are “biologically inert” — a claim coming under increasing challenge — is one of the key factors allowing PEG compounds to become so pervasive across multiple industries and thousands of products, including drugs, cosmetics, healthcare screening products and pesticides.

However, though companies describe PEG as “harmless,” the PEG manufacturing process is known to give rise to “degradation products” — also referred to as “impurities” — that are anything but harmless.

Antifreeze is a more recognizable name for EG and DEG, chemicals with toxic metabolites capable of causing “extensive cellular damage to various tissues,” especially the kidneys.

Tragically, incidents in which these substances killed children have made headlines for at least a quarter-century, with medication-associated mass poisonings of children documented in countries ranging from Nigeria to Haiti to Bangladesh.

Although the NIH and FDA conceded that EG and DEG are neurotoxic for children, the FDA allows trace amounts (0.2% total by weight) of both in PEG-containing medications.

In fact, a 2011 study concluded that DEG contamination is an inevitable outcome of some manufacturing processes.

Meanwhile, parents who have studied MiraLAX believe PEG breaks down inside the gut into EG and DEG.

Retired pathologist Dr. David Bruns, credited as the first to describe poisoning by PEG in 1982, studied fatalities from acute renal failure that resulted from the use of PEG-containing burn creams on patients with severe burns.

The severely disrupted skin barrier allowed PEG to be absorbed “right into the body.” According to Bruns, something similar probably occurs in children with a damaged intestinal barrier who ingest PEG.

Additional studies on rabbits conducted by Bruns revealed some of PEG’s metabolites include toxic aldehydes, offering a likely explanation for PEG’s damaging effects on the kidneys.

In the vast landscape of PEG-containing drugs and biologics, some drugs are “PEGylated,” which refers to a specific way of attaching PEG to biomedical molecules.

When PEGylation came into vogue in the early 1990s, manufacturers were thrilled because the process impedes the kidney’s normal attempts to clear drugs and forces the body to hang on to drugs longer.

Drug researchers cheerfully refer to this as “half-life extension.”

The mRNA COVID-19 jabs’ inclusion of PEGylated fats — called lipid nanoparticles or LNPs — is specifically designed to support “prolonged circulation” of the vaccine.

Researchers writing in Nature in December 2021 argued that without the PEG-coated lipid nanoparticles, “COVID-19 mRNA vaccines would not exist,” and they enthused that the LNPs “have the ability to alter the course of history.”

Left unmentioned was the fact that PEGylation is “not without a price” — the price being a propensity to trigger adverse immune reactions “entailing severe allergic symptoms with occasionally fatal anaphylaxis.”

A 2016 study suggested that a large proportion of the U.S. population has likely been sensitized to PEG, leaving a significant subset susceptible to hypersensitivity reactions from the PEGylated vaccines.

In fact, the published literature has begun to reflect just such a scenario.

An October 2021 article in Endoscopy described three patients who experienced anaphylactic reactions to PEG-containing bowel-cleansing agents (for colonoscopy) — all three had received Moderna injections within the previous 12 to 18 days.

Last year, the FDA warned consumers that some ultrasound contrast agents contain PEG “and should not be administered to patients with known or suspected allergies to PEG.”

The FDA did so in response to 11 cases of anaphylaxis and two deaths linked to the contrast agents’ use in patients with known PEG allergies.

However, for the thousands of families affected by MiraLAX, or the 10,000-plus individuals thus far reported to have experienced life-threatening or fatal anaphylaxis following COVID-19 vaccination, there have been no warnings.

Instead, it is left to countries like Indonesia to set an example for responsible regulatory behavior, not waiting for endlessly deferred studies but instead simply pulling drugs off the market when they kill children.