Bayer’s removal of glyphosate from residential use is a rerun of Dow Chemical’s decision in 2000 to stop residential uses of the highly neurotoxic, brain-damaging insecticide chlorpyrifos — chemical was removed from the residential market, but has remained in agricultural use for 20 years. 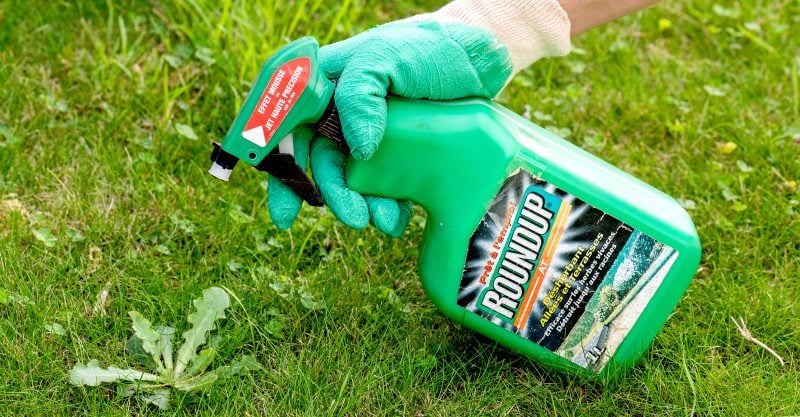 Bayer (Monsanto), the maker of the deadly herbicide glyphosate/Roundup, after hinting in May that it would end the weed killer’s residential uses in the U.S., made it official last week. With its announcement to shareholders, Bayer puts an end to residential uses beginning in 2023 and allocates $4.5 billion to cover “the company’s potential long-term exposure” from lawsuits by those harmed by the chemical.

At the same time, the company announced it is seeking a U.S. Supreme Court hearing to reverse significant jury verdicts (from $289 million to $2 billion) for individuals who have suffered health damage they tie to glyphosate exposure. Bayer claims that it will argue that federal pesticide law preempts litigation against products that it has registered with the U.S. Environmental Protection Agency (EPA).

Similar arguments have been tried before, most notably in Bates v. Dow Agrosciences (2005), and the Supreme Court has found that federal pesticide law does not protect “manufacturers of poisonous substances.”

Despite the extensive scientific review (see Pesticide Gateway) of glyphosate/Roundup and a “probable” cancer causing ranking by the World Health Organization/International Agency for Research on Cancer in 2015, Bayer says, “This move is being made exclusively to manage litigation risk and not because of any safety concerns.” And despite finding that glyphosate has contaminated the food supply and more and is found in waterways extensively, Bayer’s decision does not affect agricultural uses of glyphosate.

The residential market now shifts to other toxic weed killers for glyphosate uses unless the public initiates a shift in their purchasing practices and communities decide to transition to land management practices not dependent on toxic substances. (See Beyond Pesticides’ 30 Most Commonly Used Lawn Pesticides and the health and environmental effects.)

The decision to withdraw from the residential market for glyphosate is a rerun of Dow Chemical’s decision in 2000 to stop residential uses of the highly neurotoxic, brain-damaging insecticide chlorpyrifos. The chemical was removed from the residential market after extensive scientific study showed the adverse impact on children, but has remained in agricultural use for over 20 years until this day, due to EPA’s sustained inaction in the face of strong science.

Typically, the agency sits in the background and watches the marketplace, then codifies voluntary decisions by manufacturers after years, even generations, of poisoning and contamination. To be fair, the agency does negotiate many of these cancellations with the manufacturers behind the scenes, but, as a result, the voluntary actions by the companies are highly compromised and do not include agency determinations or findings — allowing false claims of safety, offering a shield from liability and unencumbered international marketing.

That is exactly what is playing out with glyphosate, except that much of the international community is now highly skeptical of the quality of EPA’s decisions. Common compromises are contained in Bayer’s announcement — a long phase-out period for cancelled uses without any warning to the user community or those exposed (many companies, distributors and retailers engage in fire sales to sell off the products) and a large volume of retained uses (in this case most of glyphosate use), such as all or most agricultural use and other hidden exceptions that are not understood or fully disclosed to the public.

The examples of this pattern are numerous, including the recent EPA decision to cancel the deadly chlorinated hydrocarbon wood preservative, pentachlorophenol, with dioxin contaminants among others, after it watched countries around the world one-by-one ban its use under an international treaty — the Stockholm Convention, which was never ratified by the U.S.

With a severely diminished market worldwide and difficulty setting up a manufacturing shop in the U.S. after a community and state uproar in South Carolina, the manufacturer withdrew — after 40-plus years of fighting and unthinkable cases of cancer. EPA then announced in March of this year that it was time to cancel the chemical.

With the glyphosate decision, which Bayer refers to as “risk mitigation” — that’s risk to the company’s profitability, economic viability and shareholder investment — the harm inflicted by glyphosate will continue, first to those in the farm community who handle glyphosate — farmworkers and family farmers — or are exposed involuntarily to drift and contaminated waterways, and then to those who eat food that is grown in chemical-intensive agriculture.

Glyphosate is the most widely used pesticide in the U.S. because it is used in the production of corn, soybeans and cotton, over 90% of which is genetically engineered to resist glyphosate. With this Bayer decision, it remains to be seen whether Dow’s (now Corteva Agroscience) glyphosate product Rodeo, which also has aquatic uses, will continue to be marketed.

There are lessons to be learned for policy makers, land managers, farmers and decision makers. The federal laws that we have in place, the Federal Insecticide, Fungicide and Rodenticide Act and the Federal Food, Drug and Cosmetic Act (including the Food Quality Protection Act), have failed to regulate chemicals like glyphosate, chlorpyrifos and pentachlorophenol and will continue to fail to adequately regulate 1,200 active and hundreds of inert (secret nondisclosed) ingredients in over 16,800 pesticide products in the interest of public health and environmental protection.

The current system and reform proposals that tinker with the broken system allow the continued use of pesticides that are too dangerous and proven to be unnecessary to meet pest management, productivity, profitability and quality life goals. So why are they being used? Because the laws protect chemical companies, not the public.

The laws protect the vested economic interests that wrote the laws, amend the laws and fight to protect the laws, not the public who are adversely affected and suffer cancer, neurological diseases, Parkinson’s, Alzheimer’s, diabetes, asthma and autism — and certainly not those in the people of color community who suffer disproportionately from many of these illnesses.

Similarly, the laws do not protect the ecosystems and biodiversity, which are critical to human existence. As a result, the laws do not protect pollinators, keystone species in the aquatic food web, threatened and endangered species and more. That has been documented with glyphosate, as it has with toxic pesticides generally. Instead of taking preventive or precautionary action, regulators sit and watch as we move closer and closer to crises that undermine the very existence of life.

Almost five decades of extensive glyphosate use has put animal, human and environmental health at severe risk. The chemical’s ubiquity threatens 93% of all U.S. endangered species, with specific alterations on microbial gut composition and trophic cascades. Anthropomorphic (human) studies find a strong association between glyphosate exposure and the development of numerous health anomalies, including cancer, Parkinson’s disease, and autism.

Furthermore, EPA’s 2019 decision to classify glyphosate herbicides as “not likely to be carcinogenic to humans — despite stark evidence demonstrating carcinogenicity — perpetuates environmental injustice among farmers, especially in marginalized communities. According to the Midwest Center for Investigative Reporting, a lawsuit — filed by the National Black Farmers Association against Bayer/Monsanto — argues that Black farmers are, essentially, forced to use Roundup (glyphosate) and incur the risks of developing non-Hodgkin lymphoma or other cancers (or health impacts) because of pesticide demands and the industry’s “grip” on U.S. agriculture.

The suit maintains that Bayer/Monsanto knowingly failed, and continues to fail, to warn farmers adequately about the dangers of the pesticide.

Bayer/Monsanto, as of June, had settled 125,000 claims for $9.6 billion with people who link their non-Hodgkin lymphoma to use of Roundup. There are still 30,000 cases that have not been resolved.

We cannot regulate or litigate our way out of the current threat that petroleum-based pesticides and fertilizers pose. This is a transformative moment when we must shift society, starting with our communities and local decision makers and individuals (because we know the pace at which Congress and the federal government move), to the elimination of toxic pesticides.

Yes, we can keep the pressure up on EPA and keep the litigation going, but the outcome needed is clearer than it has ever been: We do not need, nor can life survive, the continued use of toxic pesticides. Even though the Supreme Court in Bates v. Dow ruled over 20 years ago to uphold the right to litigate for damages against pesticide manufacturers, the toxic pesticide market has grown, as have the existential threats to human and ecological survival.

Still the Supreme Court found, “The long history of tort litigation against manufacturers of poisonous substances adds force to the presumption against preemption, for Congress surely would have expressed its intention more clearly if it had meant to deprive injured parties of a long available form of compensation.”

The decision continues: “Moreover, this history emphasizes the importance of providing an incentive to manufacturers to use the utmost care in distributing inherently dangerous items. Private remedies that enforce federal misbranding requirements would seem to aid, rather than hinder, the function of FIFRA [the Federal Insecticide, Fungicide and Rodenticide Act].”

Are we happy that the residential uses of glyphosate will be removed from the market? Yes, of course. But, more than anything it is Exhibit A for the failure of policy to protect what is sacred — life — and yesterday’s announcement should be a signal, an example and a call to rise up against a system of poisoning and contamination that must stop. We can start by moving our communities to organic land management. Now!

Please join us in our work to transition community-by-community across the country and around the world to organic land management. Beyond Pesticides will work with you and local decision makers to say no to the dozens of pesticides that are being used on our playing fields, parks and lawns, develop plans for the adoption of organic practices and products, and adopt policies that protect the health of people and the environment of your community. And, join with us to protect the organic standards, which are under threat from industrial agriculture and multinational (and some national) companies that want to weaken the strongest law we have to protect health and the environment, from cradle to grave — the Organic Foods Production Act.

Follow and join in on our organic advocacy through our Keeping Organic Strong campaign and make your voice heard. This is not about banning chemicals one-by-one, but facilitating the transition to land and agricultural management systems that do not utilize toxic inputs and practices harmful to health and the environment — systems that respect nature with the organic practices necessary to sustain life. To get your community off the toxic treadmill, contact Beyond Pesticides at info@beyondpesticides.org.