Too Little Too Late? Pfizer, Moderna to Study Long-Term Risk of Myocarditis After COVID Vaccines

Pfizer and Moderna are launching clinical trials to track long-term health issues following a diagnosis of vaccine-associated myocarditis and pericarditis in teens and young adults, but some experts said the risks are already clear. 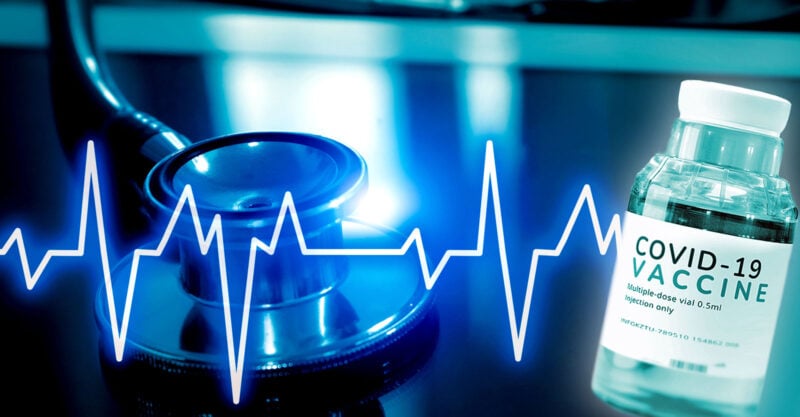 Pfizer and Moderna are launching clinical trials to track long-term health issues following a diagnosis of vaccine-associated myocarditis and pericarditis in teens and young adults.

Myocarditis and pericarditis are heart problems that multiple medical studies have shown to be associated with mRNA COVID-19 vaccination, particularly among young men.

Studies also show that the risk of myocarditis — which can cause permanent damage to heart muscle — increases with the number of boosters a person has taken and can in some cases cause death.

Health officials contacted by NBC News did not suggest that official guidance on COVID-19 vaccination will change while the studies of long-term health issues from vaccine-related heart problems are underway.

The U.S. Food and Drug Administration (FDA) declined to comment on Pfizer’s and Moderna’s studies, but an agency official told NBC News the chance of having myocarditis occur following vaccination is “very low.”

Too little, too late?

“Now two years after public release and mounting cases of fatal myocarditis published in the peer-reviewed literature, both Pfizer and Moderna have announced they will begin studies of cardiac safety that the FDA required in their 2021 Biological Licensing Agreement letters from the FDA.”

“Why did the US government and the vaccine companies wait so long? Do they anticipate their own bad news will kill the failing product line?”

McCullough, who authored “The Courage to Face COVID-19” and developed the McCullough Protocol for early treatment of COVID-19, said only an internal document review from government agencies and vaccine developers will tell the public what was going on during this “biological product safety disaster.”

“As a cardiologist, I can tell you the entire discipline of cardiovascular disease is oriented to preserving heart tissue. Heart muscle is largely terminally differentiated with low rates of turnover; hence, we cannot afford to lose any cardiomyocytes to damage caused by vaccines.”

McCullough listed a number of studies on how the mRNA vaccines affect the heart:

“Aldana-Bitar et al., described the excursion of cardiac troponin as about four days with COVID-19 vaccine-induced myocarditis which is oddly about the same duration as an ischemic myocardial infarction due to blocked coronary arteries. …

“Hence the confusion with the terms ‘myocarditis’ ‘myopericarditis’ and ‘heart attack’ in the CDC [Centers for Disease Control and Prevention] VAERS [Vaccine Adverse Event Reporting System] and the media.

“Mansanguan et al. found the rate of heart injury was 2.3% on the second injection of Pfizer in children 13-18 years old. … Two children were hospitalized with myocarditis in this 301-person study.

“Le Pessec et al., in a presentation at the European Society of Cardiology, revealed 2.8% of healthcare workers (n=777) had elevated troponin by day 3 after the third mRNA injection. …

“Given the known relationship of coronavirus spike protein and cardiac toxicity from the 1990’s, the vaccine companies should have been measuring troponin during their randomized trials in 2020.

“Baric et al. in 1999 reported: ‘We have shown that infection with RbCV [rabbit coronavirus] results in the development of myocarditis and congestive heart failure and that some survivors of RbCV infection go on to develop dilated cardiomyopathy in the chronic phase.’”

But this prior research was apparently overlooked by COVID-19 vaccine manufacturers and public health officials, McCullough suggested.

‘Do we really need to wait years to be absolutely certain this condition is serious?’

According to ZeroHedge, existing data and the freshly-launched clinical trials blatantly contradict the “safe and effective” narrative that Pfizer and Moderna have defended since they launched their vaccines.

“Why is Big Pharma investigating their own COVID vaccines for myocarditis side effects if the vaccines were already supposedly tested and proven safe and effective?” ZeroHedge asked.

“In all likelihood, Pfizer and Moderna are trying to get out ahead of burgeoning side effects with their own studies as a means to spin or mitigate bad press in the future. The chances of these studies providing honest data-driven assessments are low,” they said.

Pfizer is currently embroiled in a whistleblower lawsuit alleging fraud during its initial COVID-19 vaccine trials.

Comedian and political commentator Russell Brand also took aim at the news, asking viewers, “What kind of reality are we living in now” where pharmaceutical companies … whose products were widely mandated by elected officials who later show up on reality TV, are only now, two years later, beginning to investigate heart problems associated with their products?

Brand was referring to a former U.K. British Health Minister who resigned in June 2021 after he was caught breaking COVID-19 lockdown rules and is now starring in a reality TV show.

Brand also called out the media coverage of Pfizer and Moderna’s announcement, reading NBC News’ byline that said, “Both Pfizer and Moderna are launching clinical trials to track health issues — if any — in the years following a diagnosis of vaccine-associated heart problems in teens and young adults.”

Brand accused NBC News of using the phrase “if any” to suggest there may be no adverse health issues following a diagnosis of vaccine-related myocarditis.

“There are certainly some interesting graphs and data available that seem to suggest that there could be significant findings in those areas,” he said, alluding to research mentioned in the rest of the NBC article.

NBC news also summarized a recent CDC-funded study in The Lancet that examined health outcomes in 519 teens and young adults who reported a diagnosis of myocarditis following an mRNA vaccination concluding, “Most got better at least three months after symptoms.”

“Yes. Most of them got better after three months,” said Dr. Madhava Setty, senior science editor for The Defender. “But 1 in 5 were still not cleared for physical activity. One in 4 required daily medication to treat their condition. Ninety-nine of them required intensive care as a result of their vaccine injury.”

“We are talking about young, healthy people that required ICU admissions, that now cannot exert themselves and may require heart medications indefinitely. Do we really need to wait years to be absolutely certain this condition is serious? It is as serious as a heart attack. Literally.

“If the CDC is admitting that it does not know what the long-term repercussions of vaccine-induced myocarditis are in young people, why are they continuing to recommend that they receive these products when they already know there is little to no benefit for this demographic?

“It is nonsensical for an agency of public health to promote these therapies while waiting years for proof that they are NOT dangerous.”

Moderna: ‘We don’t understand’ why vaccines cause heart damage

The FDA in January told Pfizer and Moderna they must conduct several post-marketing safety studies due to the “known serious risks of myocarditis and pericarditis” and the “unexpected serious risk of subclinical myocarditis.”

Moderna launched two trials, the most recent in September. Pfizer told NBC News it plans to start at least one of its trials, which will include up to 500 individuals age 20 and younger, over the next few months.

In collaboration with the Pediatric Heart Network, Pfizer will monitor participants for five years, according to Dr. Dongngan Truong, a pediatrician at the University of Utah Health and a co-lead on the Pfizer study.

Participants will include people who were previously hospitalized with vaccine-related myocarditis and those who were more recently diagnosed.

Dr. Paul Burton, Moderna’s chief medical officer, told NBC News scientists still don’t have a clear explanation yet for why the vaccines cause the condition.

He suspects the virus’s spike protein, once produced in the cell after vaccination, may generate a reaction in the body that can cause inflammation in the heart.

“We don’t understand yet and there’s no good mechanism to explain it,” he said.

Burton did not comment on whether or not he was privy to the cardiology studies McCullough cited in his Substack post that showed a clear association between mRNA vaccines and heart damage.

According to Burton, the two myocarditis studies Moderna has started — one of which is being conducted in collaboration with the American College of Cardiology — are examining public and private health data from tens of millions of people who received the company’s vaccine.

He said the study would answer basic questions including: “Did they get myocarditis? When did it occur? How was it treated? How severe was it?”

The drugmaker will assess outcomes for a year or more, Burton said, with results expected to be made public in the summer of 2023.

According to some experts, when statistically significant levels of myocarditis reports began appearing in VAERS, government health officials were slow to warn the public of the possible risk — and the agency continues to downplay the risk as “rare.”

Karl Jablonowski, Ph.D., and Brian Hooker, Ph.D., P.E, in October published research on data showing that although a statistically significant vaccine adverse event “signal” for myocarditis in males ages 8-21 was seen on the VAERS database as early as Feb. 19, 2021 — just two months after the release of the COVID-19 vaccine to the U.S. public — CDC officials buried the connection between COVID-19 vaccination and myocarditis until May 27, 2021.

“By this date, over 50% of the eligible U.S. population had received at least one mRNA COVID-19 vaccine,” Hooker, chief scientific officer for Children’s Health Defense, told The Defender.

“Withholding this type of information is criminal,” he added.

According to Steve Kirsch, executive director of Vaccine Safety Research Foundation, the CDC continues to downplay and underestimate the likely number of vaccine-related myocarditis cases.

“But the CDC says it’s only ‘slightly elevated.’”

“You would think this is a problem, but it isn’t,” Kirsch said. “When 2 car owners die, the car manufacturer tells people to stop using the car. The reason for this is simple: liability.”

“But with these vaccines, there is no liability, so there is no need to set a stopping condition.

“The US government will happily injure hundreds of thousands or millions of kids and it simply just doesn’t matter because there is no liability. That’s just the way it goes.”

As of Nov. 4, there have been 24,608 cases of myocarditis and pericarditis and 4,878 reports of myocardial infarction (i.e., heart attack) reported to VAERS since mid-December 2020.