Glyphosate: Bad for Your Health, Impossible to Avoid. What Should You Do?

If you live in the U.S., you’ve probably been exposed to glyphosate in varying amounts, depending on your diet, location and lifestyle. How can you find out your level of glyphosate exposure — and what should you do if testing reveals that it’s high? 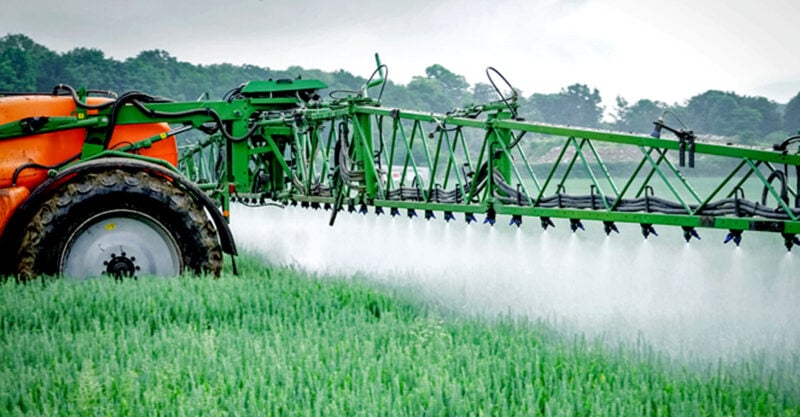 In agricultural settings, 84% of the glyphosate applied is used on soybeans, corn and cotton, all of which have genetically engineered (GE) glyphosate-resistant varieties that now make up the majority of these crops’ acreage. Each year 280 million pounds of glyphosate are applied to 298 million acres of U.S. cropland.

To put it mildly, if you’re a human in the U.S., you’ve probably been exposed to glyphosate in varying amounts, depending on your diet, location and lifestyle. This is concerning because, like many agricultural chemicals, glyphosate has been linked to serious health concerns, including cancer.

More than 100,000 people have brought court cases against Bayer, which now owns Monsanto, over allegations that exposure to Roundup caused them to develop cancer.

The IARC identified glyphosate as a probable human carcinogen in 2015, and significant additional health concerns have been raised, with research linking glyphosate to fatty liver disease and kidney disease.

While the U.S. Environmental Protection Agency (EPA) maintains that “glyphosate is not likely to be carcinogenic to humans,” a federal appeals court rejected the determination in June, stating that the EPA did not adequately assess risks to humans and endangered species.

In September, the EPA withdrew its decision but still maintains that no cancer risk to humans is present.

Many consumer groups took issue with the EPA’s assessment, suggesting that they didn’t take into account all tumor responses in animals exposed to the chemical.

“Animals did get tumors and they got more tumors at high doses,” Bill Freese, science director at the Center for Food Safety, told Yahoo. “Their cancer conclusion just did not make sense.”

Research published in Frontiers in Genetics in 2019 also supports glyphosate’s cancer link, finding that exposure in low concentrations (in parts per trillion) may induce cancer in cells when combined with microRNA-182-5p (miR182-5p).

MicroRNA-182-5p is a gene regulatory molecule found in everyone, and overexpression of the molecule has been linked to cancer. Michael Antoniou of King’s College London, who peer-reviewed the study, stated:

“These observations highlight for the first time a possible biomarker of glyphosate activity at the level of gene expression that could be linked with breast cancer formation.”

While in small doses glyphosate doesn’t kill humans outright the way it does plants, this doesn’t mean its components aren’t inherently toxic.

Stephanie Seneff, a senior research scientist at the Massachusetts Institute of Technology (MIT), has been studying glyphosate for years and has become hooked on determining what makes this ubiquitous chemical poisonous.

Research scientist Anthony Samsel is one of Seneff’s coauthors, and together they’ve suggested that one of the ways glyphosate is harmful is via disruption of glycine homeostasis. Glyphosate has a glycine molecule as part of its structure (hence the “gly” in glyphosate). Glycine is a very common amino acid your body uses to make proteins.

Further, as Dr. Kelly Johnson-Arbor, director at the National Capital Poison Center, told Yahoo, it’s not only the glyphosate in these products that’s harmful but also the surfactants added along with it:

“Glyphosate works by blocking a key enzyme in plants. This enzyme is not present in animals, like humans, which is why glyphosate is effective in killing plants but is not typically toxic to humans after acute consumption.

“However, herbicides that contain glyphosate also contain inert ingredients, including surfactants, that may be poisonous to humans.

“The surfactants present in glyphosate help the compound penetrate plant leaves for effective weed killing. Although glyphosate-based compounds are highly effective in killing weeds, glyphosate is also associated with potential health effects in humans and other animals.

“Several published studies have reported an association between glyphosate and endocrine disruption, liver and kidney disease, and cancer.

“In 2015, the International Agency for Research on Cancer (IARC) evaluated glyphosate as being probably carcinogenic to humans. The IARC based this rating on the results of experimental animal studies and other studies that demonstrated how glyphosate may cause chromosomal damage and oxidative stress.”

Glyphosate has wide-ranging effects on the body. Glyphosate-induced kidney toxicity has been associated with disturbances in the expression of genes associated with fibrosis, necrosis and mitochondrial membrane dysfunction.

Further, research published in 2015 found that glyphosate in combination with aluminum synergistically induced pineal gland pathology, which in turn was linked to gut dysbiosis and neurological diseases such as autism, depression, dementia, anxiety disorder and Parkinson’s disease.

“Glyphosate has a known detrimental effect on renal function, chelates metals like copper and iron needed for human life, and interferes with CYP 450 enzymes.

“This herbicide also has the capability to kill probiotics like Lactobacillus, Bifidobacterium, Enterococcus, and Bacillus species. Our good gut bacteria also have the shikimate pathway and are affected by glyphosate.

“When they are damaged, there are less available amino acids and minerals for our bodily function. One mineral decreased by glyphosate is manganese.

“A lack of manganese is related to mitochondrial dysfunction and neurotoxicity seen in Parkinson’s, Alzheimer’s, and Autism. It has also been linked to non-Hodgkin’s lymphoma and renal tumors.”

What’s more, glyphosate has synergistic health effects in combination with exposure to other chemicals, like Syngenta’s weedkiller paraquat. Pesticides may contribute to dopaminergic neuron death, and even low-level exposure may mimic the effects of mutations that cause Parkinson’s disease.

In one study, when researchers exposed dopamine-producing neurons to two pesticides (paraquat and maneb), it prevented mitochondria from moving properly, leading to energy depletion within the neurons.

Internal corporate documents dating back to the 1950s, recently unveiled by The Guardian, suggest Syngenta refuted external scientific research into the chemical’s harms while focusing on influencing regulators to protect product sales.

More than 80% of U.S. children and adults, ages 6 years and up, have detectable levels of glyphosate in their urine, according to data from the Centers for Disease Control and Prevention.

Out of 2,310 urine samples that were collected as part of the National Health and Nutrition Examination Survey, 1,885 contained glyphosate levels at or above the detection limit.

It’s not surprising since you can be exposed to this chemical via multiple avenues, including air, rain, municipal water supplies, soil samples, breast milk, urine, organic plant-based protein supplements and even vaccines, including the pneumococcal, Tdap, hepatitis B (which is injected on the day of birth), influenza and MMR.

Even non-GE foods often contain glyphosate because the chemical is used as a preharvest drying agent, or desiccant. About two weeks prior to harvest of grain crops like wheat, oats and barley, glyphosate may be sprayed onto the crop, which accelerates the drying process, allowing for earlier harvest.

The use of glyphosate as a desiccant may be particularly problematic because it’s sprayed so near to harvest, which could result in higher residue levels and greater exposure to consumers.

In 2020, food giant Kellogg announced they’re phasing out the use of glyphosate as a desiccant by 2025, but many other food manufacturers are still using this toxic chemical.

Licensed acupuncturist Stace Nelson-Hicks told Yahoo, “Glyphosate is used as a desiccant in tobacco, so smokers are also at an increased risk of ill health and not just from the act of smoking.”

She’s also seen patients who had significant exposures because of their environment, specifically, living near a golf course:

“Please be aware that not all exposures are from the foods we eat. I have a patient who was diagnosed with idiopathic aplastic anemia, on constant iron infusions which offered limited relief, who lived on a golf course. With just that hint, we tested her and her glyphosate load was off the charts.

“I developed a protocol for her to detoxify from this poison and all of her red and white blood cells and her platelets moved towards normal ranges for the first time since she had been diagnosed.”

How to find out your glyphosate levels

The only way to determine to what degree your diet or environment is exposing you to this toxic contaminant is to get tested. HRI Labs has developed home test kits for both water and urine, available in my online store. I do not make a profit from the sale of these kits. I only provide them as a service of convenience.

The urine test kit reveals the amount of glyphosate you’ve been exposed to in the past two to three weeks, while the hair test shows accumulated exposure over the past three to four months. If your glyphosate levels are high, you would be wise to address your diet and consider buying more organic foods.

“Glyphosate is the main reason I suggest that my patients eat organic foods as much as possible. … When I have a patient whose symptoms don’t make sense: Chronic Fatigue, Digestive issues, unexplained pain (including migraines) and even aplastic anemia, I routinely test for Glyphosate.”

Fermented foods, particularly kimchi, are potent chelators of these kinds of chemicals. Taking activated charcoal after a questionable meal can help bind and excrete chemicals as well. Remember to stay well-hydrated to facilitate the removal of toxins through your liver, kidneys and skin.

Glycine supplementation may also be a good option to help detoxify glyphosate. To eliminate glyphosate, you need to saturate your body with glycine.

Dr. Dietrich Klinghardt, who is a specialist in metal toxicity and its connection to chronic infections, recommends taking 1 teaspoon (4 grams) of glycine powder twice a day for a few weeks and then lower the dose to one-fourth teaspoon (1 gram) twice a day.

This forces the glyphosate out of your system, allowing it to be eliminated through your urine. Organic, grass-fed collagen is naturally rich in glycine, and organic bone broth is another excellent source of glycine-rich collagen, if you’d prefer to consume glycine as a whole food.

It’s also important to minimize or eliminate the use of toxic pesticides in your own backyard.

In their five-point plan to close out Roundup litigation, Bayer announced that it will be removing glyphosate from some of its Roundup products, but added, “We are taking this action exclusively to manage litigation risk and not because of any safety concerns.”