A study published in Chemosphere adds to the growing body of research demonstrating that the endocrine-disrupting effects of glyphosate play in breast cancer development. 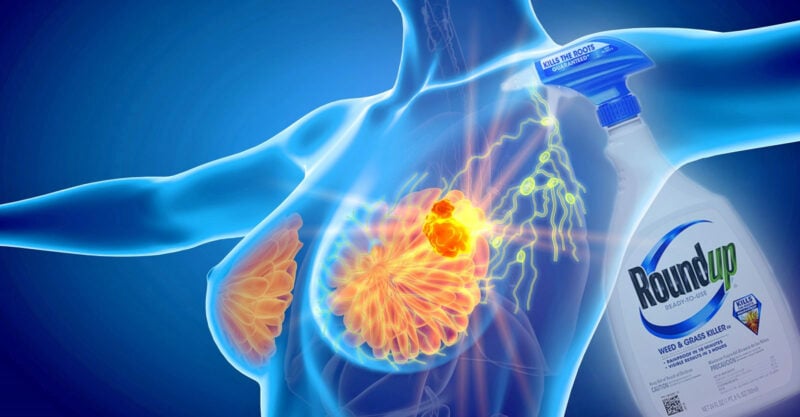 A study published in Chemosphere adds to the growing body of research demonstrating that the endocrine- (hormone-) disrupting effects of glyphosate play in breast cancer development.

Glyphosate is the most commonly used active ingredient worldwide, appearing in many herbicide formulas, not just Bayer’s (formerly Monsanto) Roundup.

The use of this chemical has been increasing since the inception of crops genetically modified to tolerate glyphosate over two decades ago.

The toxic herbicide readily contaminates the ecosystem with residues pervasive in food and water commodities.

In addition to this study, literature proves time and time again that glyphosate has an association with cancer development, as well as human, biotic and ecosystem harm.

Therefore, advocates point to the need for national policies to reassess hazards associated with disease development and diagnosis upon exposure to chemical pollutants.

The researchers note, “The results obtained in this study are of toxicological relevance since they indicate that glyphosate could be a potential endocrine disruptor in the mammalian system. Additionally, these findings suggest that glyphosate at high concentrations may have strong significance in tamoxifen resistance and breast cancer progression. [F]urther studies in animal models must confirm these effects on organ systems.”

The study evaluated the cytotoxic (toxic to cells) effect of analytical grade glyphosate and GBHs to evaluate its estrogenic activity.

The literature shows that significant exposure to these GBHs can cause cell death from the active ingredient glyphosate, as well as other ingredients in the formulations.

These ingredients can have detergent-like properties (e.g., adjuncts) that can amplify the cytotoxic effects of glyphosate.

Like past studies, this study demonstrates that glyphosate mimics the effect of E2 through Erα phosphorylation.

Breast cancer is the most common cancer among women, causing the second most cancer-related deaths in the U.S.

According to the Centers for Disease Control and Prevention, breast cancer is a disease that causes breast cells to grow out of control, with the type of breast cancer depending on the cells themselves.

Most common forms of breast cancer have receptors on the cell surface that can increase cancer growth when activated by estrogen, progesterone or too much of the protein called HER2.

One in ten women will receive a breast cancer diagnosis, and genetics can only account for 5 to 10% of cases.

Considering not only glyphosate but over 296 chemicals in consumer products can increase breast cancer risk through endocrine disruption, it is essential to understand how chemical exposure impacts chronic disease occurrence.

Glyphosate has been the subject of a great deal of public advocacy and regulatory attention and is the target of thousands of lawsuits.

Beyond Pesticides has covered the glyphosate tragedy extensively; see its litigation archives for multiple articles on glyphosate lawsuits.

The chemical’s ubiquity threatens 93% of all U.S. endangered species, resulting in biodiversity loss and ecosystem disruption (e.g., soil erosion and loss of services).

Exposure to GBHs can cause specific alterations in microbial gut composition and trophic cascades. Similar to this paper, past studies find a strong association between glyphosate exposure and the development of various health anomalies, including cancer, Parkinson’s disease and autism.

The risk assessment process used by EPA for its pesticide registration process is substantially inadequate to protect human health.

Although EPA classifies glyphosate herbicides as “not likely to be carcinogenic to humans,“ stark evidence demonstrates links to various cancers, including non-Hodgkin lymphoma.

Several studies link pesticide use and residue to various cancers, from more prevalent forms like breast cancer to rare ones like kidney cancer nephroblastoma (Wilms’ tumor).

Although the connection between pesticides and associated cancer risks is nothing new, past studies suggest glyphosate and GBHs act as endocrine disruptors, affecting the development and regulation of estrogen hormones that promote breast cancer.

However, this study is one of the few to evaluate the molecular mechanisms involved in toxicological changes initiating breast cancer events. Phosphorylation with a Zn (II) ion stabilized the bond between the estrogen-imitating activity of glyphosate and GBHs to the Erα.

The study concludes, “The results obtained in this study are of toxicological relevance since they indicate that glyphosate could be a potential endocrine disruptor in the mammalian system. ”

Cancer is a leading cause of death worldwide.

Much pesticide use and exposure are associated with cancer effects. Studies concerning pesticides and cancer help future epidemiologic research understand the underlying mechanisms that cause cancer.

Advocates argue that global leaders must fully understand the cause of pesticide-induced diseases before the chemicals enter the environment. Policy reform and practices that eliminate toxic pesticide use can end the uncertainty surrounding potential harm.

For more information on the harms of pesticides, see Beyond Pesticides’ Pesticide-Induced Diseases Database pages on breast cancer, endocrine disruption and other diseases. This database supports the need for strategic action to shift away from pesticide dependency.

Prevention of the causes of breast cancer, not just awareness, is critical to solving this disease.

In 1985, Imperial Chemical Industries and the American Cancer Society declared October “Breast Cancer Awareness Month” as part of a campaign to promote mammograms for the early detection of breast cancer.

Unfortunately, most people are all too aware of breast cancer. Detection and treatment of cancers do not solve the problem.

EPA should evaluate and ban endocrine-disrupting pesticides and make organic food production and land management the standard that legally establishes toxic pesticide use as “unreasonable.”

Organic agriculture has many health and environmental benefits that curtail the need for chemical-intensive agricultural practices.

For more information on how organic is the right choice, see the Beyond Pesticides webpage, Health Benefits of Organic Agriculture.