New research by top U.S. government scientists found that people exposed to the widely used weed-killing chemical glyphosate, a key ingredient in Monsanto’s Roundup weedkiller, have biomarkers in their urine linked to the development of cancer and other diseases. 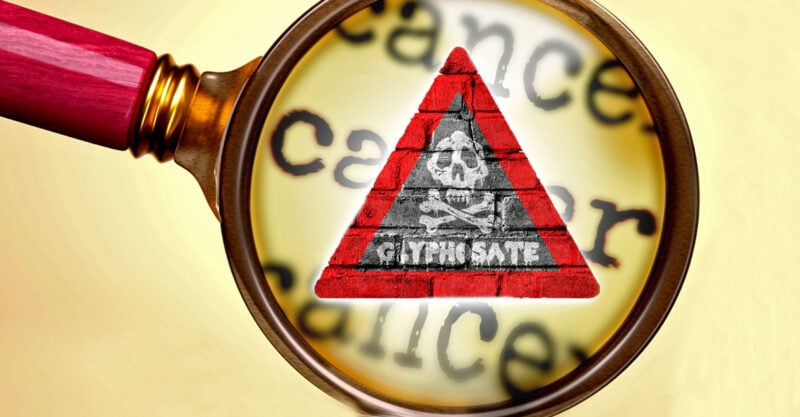 New research by top U.S. government scientists has found that people exposed to the widely used weed-killing chemical glyphosate have biomarkers in their urine linked to the development of cancer and other diseases.

The study, published last week in the Journal of the National Cancer Institute, measured glyphosate levels in the urine of farmers and other study participants and determined that the presence of high levels of the pesticide was associated with signs of a reaction in the body called oxidative stress, a condition that causes damage to DNA.

Oxidative stress is considered by health experts as a key characteristic of carcinogens.

The authors of the paper — 10 scientists with the National Institutes of Health (NIH) and two from the Centers for Disease Control and Prevention (CDC) — concluded that their study “contributes to the weight of evidence supporting an association between glyphosate exposure and oxidative stress in humans.”

They also noted that “accumulating evidence supports the role of oxidative stress in the pathogenesis of hematologic cancers,” such as lymphoma, myeloma and leukemia.

“Oxidative stress is not something you want to have,” said Linda Birnbaum, a toxicologist and former director of the National Institute for Environmental Health Sciences. “This study increases our understanding that glyphosate has the potential to cause cancer.”

The study findings come after the CDC reported last year that more than 80% of urine samples drawn from children and adults contained glyphosate.

The CDC reported that out of 2,310 urine samples taken from a group of Americans intended to be representative of the U.S. population, 1,885 were laced with detectable traces of glyphosate.

Glyphosate is the most heavily applied herbicide in history, both in the U.S. and globally. One of the best-known glyphosate-based products is Monsanto’s Roundup weedkiller.

Roundup has been used by farmers as well as consumers for more than 40 years. Officials with Monsanto and its German owner Bayer AG have always assured the public and regulators that exposure to the weedkiller does not pose a threat to human health.

Bayer said the new NIH study has many “significant methodological limitations that affects its reliability,” and said the results conflict with other government research.

“The increased oxidative stress found in the study could have been caused by any number of non-glyphosate related factors or a combination of them, and the study does not support the conclusion that glyphosate is the cause,” Bayer said in a statement.

People are exposed to glyphosate by using products made with the chemical and also by eating food and drinking water contaminated with the pesticide. Scientists have found glyphosate residues in an array of popular foods and in waterways across the U.S.

Notably, in the new paper, the NIH and CDC scientists said that while their study focused on farmers who were exposed to glyphosate when they sprayed it on fields, they saw similar results in “non-farmers.”

The findings suggest “these effects may apply more broadly to the general population who are primarily exposed through ingestion of contaminated food and water or residential applications,” the study authors wrote.

The study is so significant that it warrants regulatory attention, said some independent scientists.

“This is a top level team of investigators and a highly credible study to which regulators need to pay attention,” said Phil Landrigan, a pediatrician and epidemiologist who worked for years at the CDC and the Environmental Protection Agency (EPA) and now directs the Program for Global Public Health and the Common Good at Boston College.

Michael Antoniou, a scientist with the department of medical and molecular genetics at King’s College in London who has been researching glyphosate for years, said the results were “worrying,” with “major health implications.”

The new government-funded study comes at a time when both the EPA and European regulators are completing updated assessments of glyphosate safety, and as health advocates are pushing for limits on use of the chemical or requirements that products such as Roundup be labeled with a cancer warning.

A European Food Safety Authority spokesperson said the agency was aware of the study and would consider whether or not the findings add “new evidence” as the agency completes its new glyphosate assessment. The agency’s conclusions are due in July.

The EPA also said it was looking over the new study and would “carefully review” the findings as it finalizes its assessment.

“EPA takes very seriously our duty to protect human health and the environment,” the agency said in a statement.

The study also comes as Monsanto and Bayer remain mired in litigation brought by tens of thousands of cancer patients who claim exposure to Roundup caused them to develop non-Hodgkin lymphoma.

The company has already agreed to pay out more than $11 billion to settle the bulk of the claims — without admitting any liability — but many cases have not settled and civil trials are continuing.

Bayer is also facing a surge in investor unrest and calls for a break-up and the ouster of top leaders after the company lost 40% of its market value following its 2018 acquisition of Monsanto.

Bayer maintains that glyphosate does not cause cancer and that products made with it can be used safely. The company states on its website that EPA and other regulatory reviews provide an “extensive body of research” that back the company’s safety pledge.

Though some countries have moved to ban glyphosate products, regulatory agencies in many countries say there is a lack of evidence connecting glyphosate herbicides to cancer, and that it is one of the safest and most effective herbicides available.

Last year, a risk assessment committee of the European Chemicals Agency concluded after reviewing multiple studies that there was no justification for classifying glyphosate as a carcinogen.

The EPA has said for years that it considers glyphosate as “not likely” to be carcinogenic, and in a 2020 updated review, the agency reiterated it saw no “human health risks “of concern.” But the agency was forced to withdraw that safety determination last year after a federal appellate court invalidated the EPA’s assessment.

The court ruling said that the EPA did not properly follow scientific guidelines when it determined glyphosate was not carcinogenic, ignoring expert advice from scientific advisers, and using “inconsistent reasoning.”

The EPA now is revisiting its glyphosate evaluation and expects to issue a decision for glyphosate in 2026.

Cancer not only concern

Debate over the safety of glyphosate has persisted for years and intensified after the International Agency for Research on Cancer, a unit of the World Health Organization, declared it “probably carcinogenic to humans” in 2015.

The new findings are not the first to look at glyphosate and oxidative stress. Animal studies and cellular studies have also found an association. But there are only a handful of such studies in humans.

The NIH study is the “largest investigation to date of the relationship between glyphosate exposure and oxidative stress markers,” said Jonathan Hofmann, an author of the study from the NIH’s National Cancer Institute.

Scientists say it is important to examine substances that may cause oxidative stress because a large body of scientific evidence suggests that long-term oxidative stress contributes to the development not only of cancer but also a range of chronic conditions, such as diabetes, heart disease and reproductive problems, including male infertility.

One prior human study related to glyphosate and oxidative stress was published last year by a team of scientists specializing in public and environmental health at several U.S. universities.

Those researchers analyzed 347 urine samples collected from pregnant women, finding that higher levels of oxidative stress biomarkers were seen in the samples containing concentrations of aminomethyl phosphonic acid, a substance created when glyphosate breaks down in soil and water.

The authors of that paper noted that glyphosate and aminomethyl phosphonic acid have been shown to disrupt hormone function and warned that more research was needed due to glyphosate’s “persistence within the environment, and potential for adverse effects during pregnancy.”

The new NIH study is considered part of the Agricultural Health Study, a long-term examination of the health impacts of pesticide use on farmers funded by the National Cancer Institute and the National Institute of Environmental Health Sciences in collaboration with the EPA.

Other Agricultural Health studies have provided sometimes conflicting findings on the question of whether or not glyphosate can cause cancer, but the scientists authoring the latest research said their study was distinctive for several reasons, including using urinary glyphosate exposure measurements and pesticide exposure histories for study subjects and including people who are not farmers.

The researchers said that though the associations between glyphosate and biomarkers of oxidative stress “mainly appear to reflect effects of recent occupational exposure, there was also some evidence of associations with longer-term exposure.”

Investigators at the NIH are exploring potential opportunities to follow up on these findings and address needs for future research, Hofmann said.

Lorette Picciano, executive director of the Rural Coalition alliance of farm workers, said she hopes the EPA will pay attention to the study.

“People are dying of these cancers,” she said. “This study is very important.”