The Dutch government said it plans to purchase and forcibly shut down up to 3,000 farms it deems “peak polluters” in order to cut ammonia and nitrous oxide emissions, but critics question the government’s motives. 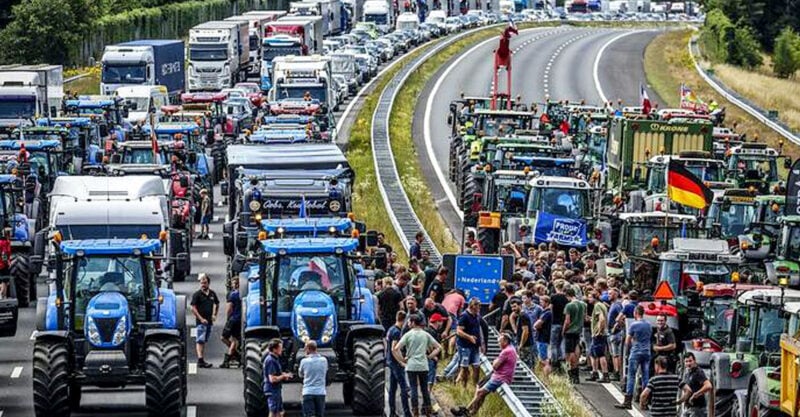 The Dutch government said it plans to purchase and forcibly shut down up to 3,000 farms it deems “peak polluters” in order to cut ammonia and nitrous oxide emissions in half by 2030, as required by EU environmental regulations.

Parliamentarian Johan Remkes, who has been negotiating with farmers for the government, said farmers have options — they can drastically innovate farming practices, shift to a different type of business, relocate or voluntarily stop farming.

Christianne van der Wal-Zeggelink, minister for nature and nitrogen policy, said the government will offer to purchase farms at more than 100% of their value, but if voluntary efforts fail, farmers will face forced buyouts.

The announcement follows months of farmer protests across the country against climate policies they say will force them to kill off livestock and will drive them out of business — policies that some argue also will drive up consumer food prices and contribute to the global hunger crisis.

During the protests, Dutch citizens expressed strong support for the farmers, adorning their homes and cars with upside-down Dutch flags and declaring their support in polling last summer.

The protests were accompanied by strong support for a new pro-farmers party.

Farmers are furious that the government is offering more lenient regulations to other top industrial polluters, which include the businesses Tata Steel, Schiphol airport, refineries owned by Shell, BP and Esso, Dow chemicals and industrial companies such as Olam Cacoa and Cargill Cacoa, according to The Guardian.

“For agricultural entrepreneurs, there will be a stopping scheme that will be as attractive as possible,” said van der Wal-Zeggelink in a series of parliamentary briefings, The Guardian reported. “For industrial peak polluters, we will get to work with a tailor-made approach and in tightening permits. After a year, we will see if this has achieved enough.”

Mark van den Oever, leader of a Dutch farmers’ political organization, Farmers Defence Force, said in response that if the government is serious that “600 fine farms” will be shut down, “then we will spring on the barricades.”

The Netherlands is one of the most intensely farmed countries in the EU. It has 1.1% of all of the farmland in the EU and produces 6% of the food. The agricultural sector emits an estimated 45% of greenhouse gases.

The new Dutch policy stems from a 2019 court ruling that the Netherlands had breached EU environmental standards, ordering it to cut nitrogen-compound pollution by 70-80%.

The Dutch government began implementing new rules on nitrogen activity on farmers that halted the expansion of dairy, pig and poultry operations.

In June, officials announced more plans to cut emissions. The Dutch Department for Agriculture, Nature and Food Quality released a map showing which areas had to reduce emissions and by how much. In some areas, this meant 95% of farming activity must halt within a year.

Protesting farmers have been in talks with the government, but with no agreement.

Protecting nature? Or elite control of the food system?

Despite obvious impacts on farmer livelihood, a strong resistance movement and the argument that different policies could help Dutch farmers substantially reduce emissions, the government insists that buyouts must move forward to protect nature.

“Nature is under pressure, and we need to act swiftly to restore it,” Lisanne de Roos, a press officer for the minister for nature and nitrogen policy, told NBC News, echoing Remkes’ remarks that nature must be central to farmer negotiations.

Mainstream media has portrayed farmers as anti-environmentalists and conspiracy theorists. But farmers say the new policies are not simply about protecting nature.

“There are farmers who are literally living there for centuries … always working with nature, and all of a sudden now they have to disappear because of this ammonia. And the farmers are not against nature, never against nature. They have to live in nature and they … have to work with nature. But it’s unbelievable that … now they have to get away … so close to nature and farmers are not convinced that it is going to help nature. …

“Europe says you have to preserve nature. … The Dutch government only made nitrogen, oxygen and ammonia as the only … elements which will tell you if nature is well preserved, and that’s absolutely crazy.”

Farmers argue that more is at stake in the buyout than the future of Dutch farming.

Global bodies and programs, such as the World Bank’s Climate-Smart Agriculture and Protected Areas initiative, the European Commission and NGOs, like the World Wide Fund For Nature, that support this “agri-transition” are implementing a comprehensive policy targeting Dutch farmers, and farmers across the world, using “biodiversity” and “climate” protection as a pretext for taking land as part of a larger project to re-make agriculture, according to a recent report by The Grayzone.

The Sri Lankan government conducted a similar experiment earlier this year, eliminating nitrogen-based fertilizer, which led to a famine that toppled the government. The Irish government also warned farmers that they must cut emissions or face consequences.

Agricultural researcher, permaculturalist and author Christian Westbrook — also known as the “Ice Age Farmer” —  explained in an episode of “RFK Jr. The Defender Podcast,” how the Rockefeller Foundation and the Bill & Melinda Gates Foundation have long pushed the idea of a so-called Green Revolution.

Westbrook warned that narratives crafted to appeal to “green consumers” disguise a more nefarious intent on the part of the global elite who, in fact, are in the process of launching a “hostile takeover” of the global food system.

The global elites have used their influence over multilateral institutions to propose a series of top-down technocratic transformations of the global food system that will consolidate their control over global agriculture and limit farmer autonomy in the name of protecting the planet from environmental and climate destruction.

The World Economic Forum (WEF) — a neo-liberal public-private partnership that seeks to “define, discuss and advance key issues on the global agenda” — has proposed that farmers embrace “climate-smart” methods to completely transform agriculture to “net-zero, nature positive food systems” by 2030.

Sieta van Keimpema, spokesperson for the Farmers Defence Force, discussed the links between the WEF and Dutch politicians with The Grayzone:

“They go to Davos and don’t deny it. It’s a fact that the WEF is pushing legislation that isn’t decided in a democratic way.

“The farmers have seen what is happening with the World Economic Forum, with Bill Gates, etc. … that’s why they are so active …

“They know that what they are fighting is a very strong lobby of multinationals who really want to control food.”

What will the seized land be used for?

Commenting on the farm expropriation, regenerative farmer Will Harris told The Defender:

“There are very few people left who actually know how to manage land who know how to keep natural cycles.”

Dutch activist Will Engel argued that land currently occupied by farms is strategically important to industry and housing and that the “nitrogen crisis” is being used to implement policies that will make a total reorganization of the Dutch landscape possible, the OffGuardian reported.

A Dutch environmental report indicates that the land will be used for housing for migrants and for high-income people who want to live closer to nature, The Grayzone reported.

Another possible plan proposes to build a new metropolis that encompasses parts of Holland, Germany and Belgium called the “Tristate-City,” to create unified green urban areas across Europe, “an organically green network metropol where urban and rural space remain in balance.”

People’s movements and civil society groups across the world have argued that industrial farming generates severe environmental impacts, but the U.N.-WEF vision of “precision agriculture,” genetic engineering, fewer farmers and farms and lab-made synthetic food — all of which consolidate corporate control over food and agriculture — should not be the alternative.

Although industrial agriculture uses substantial resources, small farmers feed most of the world.

“The unscientific, unjust and undemocratic response to the chemical industry-created nitrogen problem is to reduce farmers instead of reducing dependence on chemical fertilizers as is happening in the Netherlands,” she wrote.

She and others argue that policies should be created to reduce the use of chemical fertilizers and make the chemical industry pay for nitrogen pollution, instead of criminalizing farmers trapped in a chemical treadmill by the industrial agriculture model.

We should reduce the use of chemical fertilizers and make the chemical industry pay for nitrogen pollution, instead of criminalizing farmers trapped in a chemical treadmill by the industrial agriculture model.https://t.co/nE3Q7JMohZ

Oxfam, in a July 6 press release, also criticized attempts to combat pollution by targeting farmers. According to the press release:

“Instead, they need to invest in small-scale food producers and food workers. They need to repurpose our global agriculture and food system to better serve the health of people, our planet, and our economies.”

Harris, who transitioned his fourth-generation family farm in Georgia from industrial to regenerative farming practices, commented on the Dutch proposal to shut down the farms, telling The Defender:

“This whole thing seems like such a knee-jerk reaction to me. It is really throwing the baby out with the bathwater kind of deal. It seems like it makes more sense to isolate the problem.”

Harris explained how he and others have made the transition from industrial to regenerative farming.

“Is it quick and easy? No, it’s not. Can it be done? Yes. There are those of us that have figured it out — how to do it without the damaging technologies. And we are producing really good food in a really healthy way in a manner that is perpetual and resilient and kind to the earth and kind to the rural communities.

“I think if those Dutch farmers were given the chance to convert to a holistic land management system … restart the science of nature to produce abundance, getting it processed and marketed, it could work.  People, consumers, still got to eat, and a lot of people might choose not to eat vegetable protein or crickets or whatever.”

Dutch farmers have signaled their willingness to transform their agricultural practices. Between 1990 and 2015, they reduced consumption of nitrogen fertilizer by 50% and animal excretion decreased by 40%.

“We have a million less cows than in 1991, when [the global environmental treaty] Natura 2000 came … We already reduced 70 percent of emissions,” according to Sieta.