Baum Hedlund Aristei & Goldman and Robert F. Kennedy, Jr., chairman and chief legal counsel for Children’s Health Defense, filed a lawsuit against Merck on behalf of 16-year-old Catherine Boss, who said she is now physically unable to pursue a career working with animals. 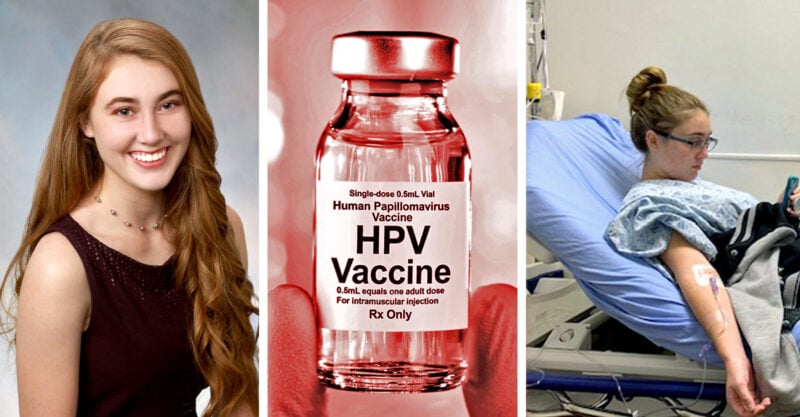 The plaintiff in the case, Catherine Boss, was 16 when she received her first Gardasil HPV vaccine injection in 2016.

Before the vaccine, Catherine was a normal teenager who loved school and actively participated in gymnastics, dancing, soccer, rock climbing, hiking and other hobbies. She was named a captain on her school’s color guard rifle and sabre team, her favorite activity.

Catherine’s symptoms prevented her from participating in activities a healthy young person her age would normally enjoy. She was often absent from school and was forced to reduce her social and physical activities.

Catherine had big plans to pursue a career working with animals after completing high school. Now 22, she is physically unable to pursue the career she wanted. She walks with a cane that doubles as a seat, which she uses regularly when she can no longer stand. Her post-Gardasil health conditions remain a significant part of her life, and she would love nothing more than to be healthy again.

“When all of the things you’ve ever wanted to do are physical and something like this comes along and takes away your ability to simply stay on your feet for more than a few minutes at a time, I can’t express how devastating that is,” Catherine said. “I just want Merck to know that they took from me the opportunity to pursue my dreams.”

“It is unfortunate that pharmaceutical companies are not held to the same standard as doctors. I feel like Merck has inflicted harm to my child under the guise of providing ‘protection.’”

Together, Baum Hedlund and Kennedy have filed more than a dozen Gardasil-related lawsuits throughout the country against Merck, including the first wrongful death case, in September, over the death of 13-year-old Noah Tate Foley.

The latest Gardasil lawsuit allegations against Merck include:

In August, a judicial panel issued an order consolidating more than 31 lawsuits brought against Merck for injuries allegedly caused by its Gardasil HPV vaccine.

The lawsuits allege the pharmaceutical giant fast-tracked Gardasil through the U.S. Food and Drug Administration’s approval process and deceptively conducted clinical trials to mask serious side effects and exaggerate the vaccine’s effectiveness.

The consolidation of all Gardasil injury cases in the U.S. into a single courtroom means every child and every adult injured by the Gardasil vaccine can now argue their cases in front of a single federal judge, Kennedy said.

Baum Hedlund and Kennedy’s lawsuits against Merck alleging the company knowingly conceals the adverse events associated with its Gardasil vaccine include:

While each case is unique, all of the plaintiffs agree that if Merck had told the truth about the known dangerous side effects associated with Gardasil, they never would have consented to the HPV vaccine.

If you or your child suffered harm after receiving the Gardasil HPV vaccine, you may have a legal claim. Please visit Baum Hedlund Law for a free case evaluation. Click here to watch the recent Gardasil litigation update interview with Baum Hedlund Shareholder Bijan Esfandiari.