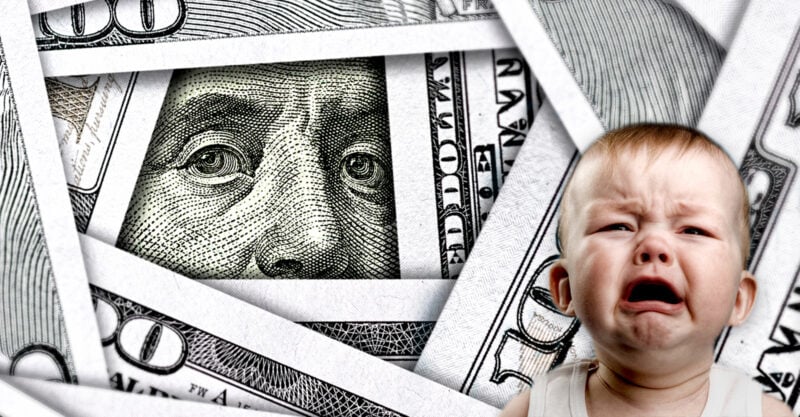 “When looking at how systems are corrupted [and] controlled and how ordinary lives are affected, it’s usually important to look at where power is centralized and how power operates,” said comedian and commentator Russell Brand.

Weighing in on the U.S. baby formula shortage, Brand said he believes corrupt power structures are behind the crisis.

At the root of the formula shortage is not “Putin’s price hikes” or migrant babies “stealing our formula,” Brand said, but rather the powerful corporations that cornered the market on formula.

Is Putin “hiking prices,” Brand rhetorically asked, “or are those prices being hiked because of centralized financial power and monopolizing forces that have been ramping up for many a long year now?”

Free-market capitalism has failed, at least when it comes to regulated products, he said:

“The myth that we are sold about free-market capitalism is [to create] a variety of choice, any plucky little upstart can make their own little baby formula … if your baby formula is good enough.

“Well, that’s not true, is it? Because what tends to happen is centralized power is able to organize itself efficiently and monopolize indefinitely. Once a market is cornered or controlled it can be manipulated — and prices can be increased and managed.”

What’s more, Brand said, The U.S. Food and Drug Administration (FDA) and the formula companies “collaborate, cooperate [and] communicate in ways that don’t seem like the kind of relationship that should exist between a regulator and the thing that they’re regulating.”

Abbott Nutrition, the food-sector branch of the medical device and healthcare corporation Abbott Laboratories, dominates the infant formula market. The company’s sales accounted for roughly 43% of the $45.4 billion formula market a decade ago, according to a 2011 U.S. Department of Agriculture report, which contains the latest available figures.

Abbott used the massive profits it accumulated between 2019 and 2021 to enrich shareholders amid a bacteria outbreak that killed two babies and temporarily closed its plant in Sturgis, Michigan, according to financial documents and whistleblower testimony that The Guardian recently revealed.

On May 16, the White House announced a deal to reopen Abbott Nutrition’s infant formula plant in Michigan in a bid to ease widespread shortages.

However, the move won’t address the underlying problem of an industry dominated by only three companies — Abbott, Mead Johnson and Gerber.

Also on Tuesday, the Federal Trade Commission (FTC) announced it would launch an investigation into the formula shortage, “to shed light on the factors that have led to concentration in the infant formula market and the fragility of the supply chains for these crucial products.”

Another aim of the investigation is to look into “the nature and prevalence of any deceptive, fraudulent, or otherwise unfair business practices aimed at taking advantage of families during this shortage,” the FTC stated in its announcement.

Rep. Rosa DeLauro (D-Conn.) last week said Abbott Nutrition “put profits and production over people, and due to what is a disgraceful lack of oversight is now causing parents and caregivers to struggle to feed their kids.”

Brand pointed out that in 2012, Abbott Laboratories paid more than $1.5 billion to settle criminal and civil charges relating to the promotion of off-label uses of its drug Depakote.

It was the second-largest settlement of this kind by a drug company.

The Pharmaceutical Integrity Coalition called the fraudulent marketing a “coldly calculated scheme to exploit [people with dementia] for financial gain.”

The coalition also reported that in 2001-2006, Abbott encouraged unlawful, off-label use of Depakote to treat schizophrenia, despite clinical results showing no efficacy for the use of Depakote for this indication:

“Abbott waited almost two years to inform its sales force and another two years to publish the findings [of the clinical studies]. Instead, the company continued to promote off-label use of Depakote to treat schizophrenia.”

“Abbott Laboratories is the ninth-biggest pharmaceutical company in the world, with a net worth of $192 billion,” Brand said, citing Macrotrends.

“How does Abbott get away with this negligence?”

It’s almost as if, he said, the government — which Abbott aggressively lobbies — thinks the profits of companies like Abbott are more important than schizophrenic people, people with dementia and babies.