Now that COVID vaccines have established mRNA technology as the “new frontier for vaccine development,” pharma giants have set their sights on an mRNA vaccine for respiratory syncytial virus (RSV) — which they hope to add to an already overburdened childhood vaccine schedule. 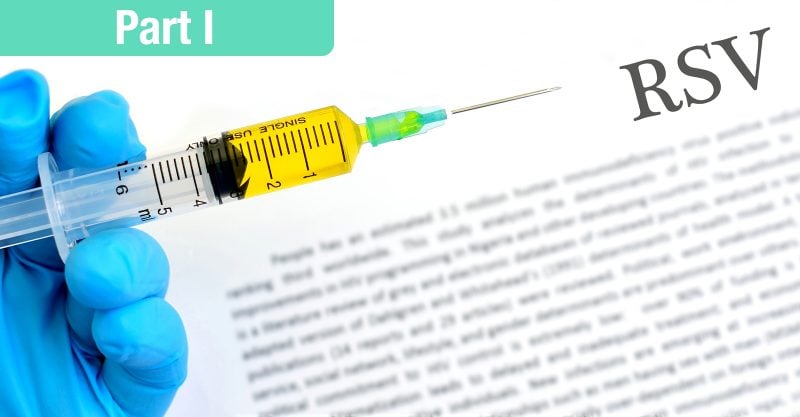 EDITOR’S NOTE: This is the first in a series of articles by The Defender on respiratory syncytial virus, commonly known as RSV. Read part two — “From Chimpanzees to Children: The Origins of RSV — Respiratory Syncytial Virus.”

Over the decades since childhood vaccines began rolling out on a widespread scale, pediatric vaccine injuries have left many parents regretful for forgetting or ignoring a basic history lesson.

That lesson, in the words of Harvard medical historian David Jones, is that “when it comes to vaccines and immunization … there always has been a risk and there always will be a risk.”

Sixty-five years ago, families learned about the risks of medical experimentation the hard way when they allowed researchers to use their infants as test subjects for a vaccine against a newly discovered illness dubbed “respiratory syncytial virus” (RSV), a common-cold-like illness now considered to affect “virtually all children,” mostly uneventfully, by age two.

The disastrous RSV vaccine led to the death of two infants and to hospitalization for the majority of other young clinical trial participants.

Since that time, vexed researchers have continued to deploy “trial-and-error approaches.” But they admit the “road to an effective RSV vaccine is paved with challenges,” in large part because of the tricky problem of “vaccine-associated disease exacerbation” — a problem that has also plagued coronavirus vaccines.

The gist of the “exacerbation” issue, also called antibody-dependent enhancement or pathogenic priming, is that the vaccine “primes” recipients to later develop more severe disease instead of protecting them.

Lured by the prospect of a large untapped global RSV vaccine market, manufacturers are nonetheless setting their sights on RSV vaccine development — and not just for infants but also for pregnant women and the elderly.

By 2019, capitalizing on the proliferation of new vaccine technologies, clinical trials were evaluating an estimated 30 candidate RSV vaccines, and scientists were gleefully announcing that the world “might be on the brink of clinical implementation soon.”

The crowded field of RSV vaccine candidates includes messenger RNA (mRNA) vaccines. In fact, with COVID injections having opened the floodgates to establish mRNA technology as the “new frontier for vaccine development,” pharma giants appear more confident than ever that they are close to finally producing an RSV winner.

In a nod to these hopes, the U.S. Food and Drug Administration (FDA) has just granted fast-track designation to Moderna for the company’s experimental mRNA-1345 vaccine against RSV. Although the fast-track FDA review applies only to older adults for now, Moderna’s phase 1 trials of its RSV injection also include children as young as 1 year old.

The 1960s RSV vaccine was a disaster in terms of safety, but researchers engaged in subsequent RSV vaccine attempts have tried to steer public attention away from risks and toward a single-minded focus on effectiveness.

With the help of industry-standard study design tricks — such as monitoring adverse events for only a short while or comparing the vaccine against immune-activating aluminum adjuvants or other vaccines (rather than an inert placebo) — manufacturers have managed to keep potential safety problems in the shadows.

Yet these are precisely the populations that RSV studies have targeted — all flops, with none leading to a licensed vaccine and a bare minimum of disclosure about safety.

One of the RSV vaccines entering clinical trials in recent years — including planned phase 3 trials with a “target population” of two-month-olds — is a viral vector vaccine manufactured by GlaxoSmithKline (GSK) that, like the AstraZeneca COVID shot, uses a chimpanzee adenovirus as the vector.

Interestingly, the researchers who identified RSV in the mid-1950s initially found it in chimps, not humans, and called it “chimpanzee coryza agent.” [Note: RSV’s origins will be discussed further in an upcoming article in The Defender].

The gold rush is on

Globally, the highest burden of RSV-attributed illness is in low- and middle-income countries, where 99% of fatalities occur.

For the majority of American babies for whom RSV plays out as a short-lived cough or runny nose — just like any other winter sniffles — an RSV vaccine will offer no benefit. Nor are vaccines likely to help the subset of infants who do go on to develop more serious lung inflammation (bronchiolitis) or pneumonia, children who tend to have comorbidities or weaknesses stemming from prematurity, congenital problems, neuromuscular disorders or a compromised immune system.

Yet, as the calamitous COVID injections are illustrating, virus fears — helped along by propaganda and manipulation of social psychological concepts such as social influence — can persuade parents to adopt and promote measures that run counter to their children’s interests.

To ensure ongoing panic, the media and hospitals are now reporting a summer outbreak of RSV-plus-COVID. Ironically, experts explain the “unusually high” number of RSV cases as “the result of children being largely quarantined last fall and winter, hindering them from building up an immunity.”

Unfortunately, accounts of this “wicked one-two punch” are bound to send some parents into the waiting arms of manufacturers dangling salvation in the form of an RSV vaccine, even if the injection, such as Moderna’s likely forthcoming mRNA shot, uses a technology that mRNA’s creator is warning is risky.

GSK candidly admits in materials shared with the World Health Organization that the company’s vision for its two-dose infant RSV shot is for “co-administration with routine paediatric vaccines” — in other words, incorporation into already overburdened childhood vaccine schedules.

Shocked by the scale and severity of COVID vaccine injuries in their adolescents, some parents are pushing back against the “one in a million” narrative, reminding the world that there is no accountability or liability for injuries caused by any experimental or licensed vaccine.

With roughly 400 adverse events documented in the package inserts of existing childhood vaccines, other parents might do well to consider whether the risks of either RSV or COVID injections are worth the tenuous benefits.