In an interview with The Defender, Emily Jo said when health officials push the vaccines it’s “we’re all in this together,” but when you follow their advice and you’re injured by a vaccine, you’re on your own. 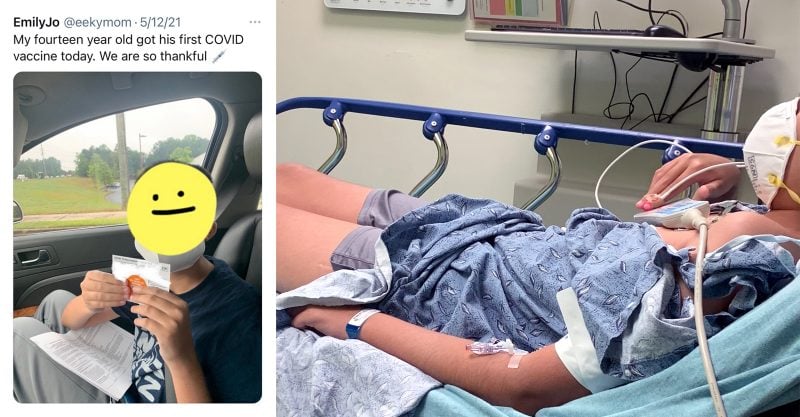 Aiden Jo, 14, is spending his freshman year of high school sitting alone on the sidelines because he can’t engage in any physical activity, his mother said.

When most kids are in gym class, Aiden is resting in an effort to keep his heart rate lowered, after being diagnosed with heart inflammation doctors say he developed after receiving Pfizer’s COVID vaccine.

In an exclusive interview with The Defender, Emily Jo, Aiden’s mother, said before her son got the vaccine, she was led to believe his chance of suffering an adverse reaction was “one in a million.”

Aiden, from Georgia, received his first dose of Pfizer on May 12. He had no history of COVID or pre-existing conditions except for asthma. “We were one of the first ones, and I believe that may have been the day the CDC cleared it,” Jo said.

On June 10, several days after his second dose, Aiden woke his mother up at 4:30 a.m. because his chest hurt and he couldn’t breathe.

Jo said she was aware of the potential side effect of heart inflammation, but the Centers for Disease Control and Prevention (CDC) said it was very rare and mild.

“What they didn’t explain is that mild means hospital care and follow-up care indefinitely,” Jo said.

Jo took her son to an emergency room in Atlanta, where the CDC has its headquarters. The ER doctor first asked whether Aiden had his vaccine, then tested his troponin level to see if his heart muscle had been damaged. Doctors also ran an EKG.

After both tests came back as abnormal, Aiden was admitted to the acute cardiac unit.

The first night Aiden stayed in the hospital his troponin number quadrupled overnight. Aiden’s mother said the cardiologist reported it to the CDC’s Vaccine Adverse Events Reporting System (VAERS I.D. 1396660), and was in contact with the CDC multiple times during his four-day hospital stay.

“They determined that yes, he met the criteria of having post-vaccine myocarditis,” Jo said.

“The biggest problem is they [CDC] are not explaining what mild myocarditis means,” Jo said. “Aiden’s cardiologist told us no case of myocarditis is ‘mild.’ That’s like saying a heart attack is mild.”

Jo said her son gets very tired easily and his recovery will be a long process.

“He can’t do any physical activity, no recess, no PE, he has to have more time to go between classes until he has a cardiopulmonary stress test that shows his heart can handle the stress,” she said.

My kids are playing outside with friends. They are running and my son has to walk. At the same time, I’m terrified that he will come in again with shortness of breath or chest pain. It feels like this should be called long myocarditis.

Jo, who said she’s been the target of animosity from anti-vaxxers for vaccinating her son, and now from pro-vaxxers for telling her son’s story of vaccine injury, said the guilt is eating her up.

“I was one of those jerks who was like, ‘Oh it’s your fault. You’re the reason everybody needs to get vaccinated,’ so this has flipped everything for me upside down,” Jo said.

Jo said all her kids are fully vaccinated and she was one of the most trusting advocates of the CDC and American Academy of Pediatrics (APA) — until her son experienced his vaccine injury.

“They’ve lost me and they’re going to lose a lot of people,” she said. “When you lose trust in public health we have a big problem. They’ve lost one of their biggest advocates and I don’t think it can ever be earned back.”

Jo said if you were to ask her today if she would vaccinate her children, she would say “no,” because the vaccine is not effective and kids are at a lower risk.

“I know the Delta variant is serious. I take this all seriously. I have never been someone to downplay the virus. We masked, we distanced. We did online learning. I just don’t see enough … and the way that they’re pushing — the APA — pushing this through. This is just disgusting to me.”

Jo said prior to her son having the reaction, she was not aware vaccine makers were exempt from liability. She thinks parents need to know there is little recourse should their child get injured by a vaccine.

“I think another thing parents need to understand is that myocarditis is not covered under the National Vaccine Injury Compensation Program, and the Countermeasures Injury Compensation Program only covers if you’re incapacitated, wheel-chair bound or dead. We have incurred thousands and thousands of dollars in medical bills. We have insurance but they don’t pay all. It does not account for tests down the road that we still have to get.”

Jo said she knows the financial part is not the main concern, but she’s a teacher and doesn’t have thousands of dollars sitting around.

“I don’t feel I should have to pay for doing what I was told to do by the government,” Jo said. “Hey we are all in this together and then you get a vaccine injury and you’re just completely ignored — and not just ignored but beat up from both sides.”

I’ll help explain. My son has vaccine induced myocarditis. He spent a week on the Acute Cardiac Floor. He can do no physical activity, he has countless follow up appointments, and thousands in medical bills. @HHSGov bears zero responsibility. Hope that helps @yourheartdoc1 https://t.co/zcmNPIoAgu

“Why are these boys just shoved into a corner as collateral damage as if it doesn’t matter?” she asked.

“I’ve known many, many children who’ve gotten COVID. This is anecdotal. I know there are serious cases but anecdotally, I have seen 15-20 kids who have had COVID. They had the sniffles and my kid is the one who ended up in the hospital because of the vaccine.”

According to the latest data from VAERS, there have been 2,018 U.S. reports of myocarditis and pericarditis following COVID vaccines, with 1,275 cases attributed to Pfizer, 667 cases to Moderna and 71 cases to J&J’s COVID vaccine.

Among 12- to 17-year-olds, there have been 406 reports of myocarditis and pericarditis, with 402 cases attributed to Pfizer’s vaccine.

According to the VAERS website, underreporting is one of the main limitations of a passive surveillance system like VAERS. The website states: “The term underreporting refers to the fact that VAERS receives reports for only a small fraction of actual adverse events.”

On June 25, the U.S. Food and Drug Administration (FDA) added a warning to patient and provider fact sheets for Pfizer and Moderna COVID vaccines suggesting an increased risk of myocarditis and pericarditis — particularly following the second dose and with onset of symptoms within a few days after vaccination.

The FDA’s update followed a review of information and discussion by the Advisory Committee on Immunization Practices (ACIP), a committee within the CDC that provides advice and guidance on effective control of vaccine-preventable diseases, during a June 23 meeting where the committee acknowledged 1,200 cases of heart inflammation in 16- to 24-year-olds, and said mRNA COVID vaccines should carry a warning statement.

Dr. Elizabeth Mumper, a pediatrician who has seen many patients experience vaccine adverse events in her practice, listened to the entire June 23 ACIP meeting.

“I was surprised that a working document was presented in which ACIP was leaning toward recommending a second COVID vaccine in patients who experienced heart inflammation after the first dose, as long as the patient had improved. I was also surprised that some ACIP committee members seemed to be making the assumption that the cases of myocarditis and pericarditis would not cause long-term harm. We simply do not have the evidence to make COVID vaccine decisions on that assumption.”

Mumper said she’s worried there will be many more cases of heart inflammation as the vaccine is rolled out to younger and younger children.

Health officials said the benefits of receiving a COVID vaccine still outweigh any risks. But physicians and other public commenters during the June 23 meeting accused the CDC of exaggerating the risk of COVID to young people, and minimizing the risk of the vaccines.

Pfizer and its vaccine partner BioNTech submitted an application in May to the FDA requesting full approval of its COVID vaccine.

Dr. Anthony Fauci, director of the National Institute of Allergy and Infectious Diseases and chief medical advisor to President Biden, said Sunday he is hopeful the FDA will give full approval to Pfizer’s vaccine by the end of August, and he predicted a wave of vaccine mandates would soon follow.