AstraZeneca’s COVID-19 vaccine caused the “catastrophic brain injury” that resulted in the death of a 48-year-old U.K. rock singer two weeks after he got the vaccine, an inquest concluded. 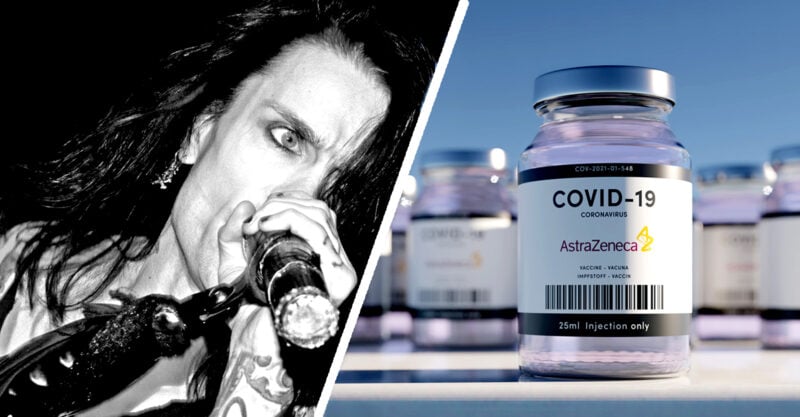 A U.K. rock singer who goes by the name Zion died from a “catastrophic brain injury” caused by the AstraZeneca COVID-19 vaccine, an inquest concluded.

The 48-year-old man from Alston in Cumbria, a county in North West England, developed an “excruciating” headache on May 13, 2021, eight days after receiving the AstraZeneca vaccine.

Although he took painkillers, Zion’s headaches increased in severity and four days later, his speech was impaired and he started having seizures.

Zion died May 19, 2021, despite emergency surgery to try to treat his “vaccine-induced immune thrombotic thrombocytopenia,” which causes swelling and bleeding in the brain.

After his death, his fiancée, 39-year-old Vikki Spit, said she had spent only one night apart from him in their 21 years together and that her life was “smashed into a million pieces” by his death, according to the Daily Mail.

Spit is the first person in the U.K. to receive compensation for a COVID-19 vaccine death.

During the Aug. 17 inquest, the panel heard how Zion was generally fit and well with no significant previous medical history.

An inquest is a formal investigation conducted by a coroner to determine how someone died. The purpose of an inquest is limited to establishing the identity of the deceased individual as well as where, when and how they died.

A paramedic who was initially called to Zion’s home on May 15, 2021, told the inquest panel Zion was “alert and sat” up when the paramedics arrived, the Daily Mail reported.

She said she advised Zion to go to the hospital for further testing, but he said he did not want to go for fear of getting COVID-19.

The paramedic also told the court she did not receive official guidance regarding the AstraZeneca vaccine and its potential severe risks until around July 2021.

Spit said the paramedic was “adamant” the migraine had nothing to do with the vaccine and that she and Zion both “believed her.”

She added, “He was prepared to go to [the] hospital if the advice was to do so.”

However, the paramedic denied Spit’s claim.

A clinical review of the North East Ambulance Service’s handling of the initial paramedic call was later carried out and concluded the paramedic did a “thorough assessment” and that there were “no concerns.”

Two days later, on May 17, Spit called for paramedics again. Upon arriving at the home, the paramedic described Zion as “dazed and confused.” Zion began having a seizure and was immediately taken by ambulance to the hospital.

He was later transferred to Royal Victoria Infirmary (RVI) in Newcastle-upon-Tyne where Dr. Damian Holliman, a neurosurgeon at the hospital, performed emergency brain surgery on Zion, but the bleeding in the brain had already caused it to swell.

Holliman said he was “fully aware” that Zion’s blood clot “was the result of his recent vaccination.”

Two other RVI consultants, including Dr. Christopher Johnson, an intensive care consultant, also presented evidence at the hearing and said they agreed with Holliman’s assessment.

Johnson said he “shared the view” that the blood clot Zion developed was “vaccine-induced,” adding that at the time, guidance on how to manage the condition was rapidly changing due to it being a “developing situation.”

Johnson declared Zion dead on the morning of May 19.

There was “no evidence,” she said, “that earlier hospital admission would have altered the sad outcome.”

As of July 27, the U.K.’s vaccine regulator, the Medicines and Healthcare products Regulatory Agency (MHRA), had received reports of 444 cases — including 80 deaths — of major thromboembolic events (blood clots) with concurrent thrombocytopenia (low platelet counts) in people who received an AstraZeneca COVID-19 vaccine. Six of the deaths occurred after the second dose.

EU regulators on April 7, 2021, announced a “possible link” between AstraZeneca’s COVID-19 vaccine and “very rare” blood clots, but concluded the benefits of the vaccine still outweigh the risks.

The European Medicines Agency (EMA) did not recommend restricting use of the vaccine based on age, gender or other risk factors at the time, but recommended blood clotting after vaccination be listed as a possible side effect, according to a statement issued by the agency’s safety committee.

The EMA’s recommendations followed the agency’s review of 62 cases of cerebral venous sinus thrombosis and 24 cases of splanchnic vein thrombosis reported in the EU drug safety database (EudraVigilance) as of March 22, 2021. Eighteen of the cases had resulted in death at the time of the review.

The EMA and MHRA initially did not recommend any age restrictions on the vaccine, although the MHRA warned of a “slightly higher incidence in the younger adult age groups,” as The Defender previously reported.

MHRA regulators advised that the “evolving evidence should be taken into account when considering the use of the vaccine.”

The U.K.’s Joint Committee on Vaccination and Immunisation (JCVI) acknowledged in an April 7 statement reports of an “extremely rare adverse event of concurrent thrombosis (blood clots) and thrombocytopenia (low platelet count) following vaccination with the first dose of AstraZeneca.”

The JCVI said available data suggests “there may be a trend for increasing incidence of this adverse event with decreasing age, with a slightly higher incidence reported in the younger adult age groups.”

These concerns led Jonathan Van-Tam, England’s then-deputy chief medical officer, to recommend individuals under age 30 in the U.K. be offered an alternative to the AstraZeneca jab, provided one was available and it did not cause a substantial delay.

The JCVI on May 7, 2021, updated its guidance advising against the AstraZeneca vaccine for individuals under age 40.

The AstraZeneca vaccine is not authorized for use in the U.S. However, it is similar to  the Johnson & Johnson (J&J) COVID-19 vaccine as both use an adenovirus vector technology.

The U.S. Food and Drug Administration (FDA) in May put strict limits on the use of J&J’s vaccine, citing the risk of a blood-clotting condition the agency described as “rare and potentially life-threatening.”

The FDA has not limited the use of the Pfizer or Moderna mRNA vaccines despite reports of blood clotting disorders associated with both brands.

Zion’s death not an isolated case

On Aug. 3, The Defender reported that the U.K. family of a 27-year-old engineer who died from catastrophic brain bleeds after receiving AstraZeneca’s COVID-19 vaccine was considering taking legal action, pending an upcoming preliminary review of their son’s case.

A CT scan on April 10, 2021, revealed Last had developed a cerebral venous sinus thrombosis, which occurs when a blood clot forms in the brain’s venous sinuses and prevents blood from draining out of the brain.

Last died at Addenbrooke’s Hospital in Cambridge, U.K., on April 20, 2021 — 11 days after he sought medical treatment for severe headaches.

Another U.K. man, 26-year-old Jack Hurn, died last year from “catastrophic” blood clots in his brain 13 days after receiving the AstraZeneca vaccine, The Defender reported on May 23.

The Defender reported earlier this year on the deaths of two U.K. residents who also developed blood clots after the AstraZeneca vaccine, and on reports of blood-clotting disorders among Australian, German and Brazilian residents following the shots.