UK coroners in two separate cases this week concluded individuals who received AstraZeneca’s COVID-19 vaccine died from blood-clotting disorders caused by the vaccine, which uses the same adenovirus technology as the Johnson & Johnson COVID vaccine authorized for emergency use in the U.S. 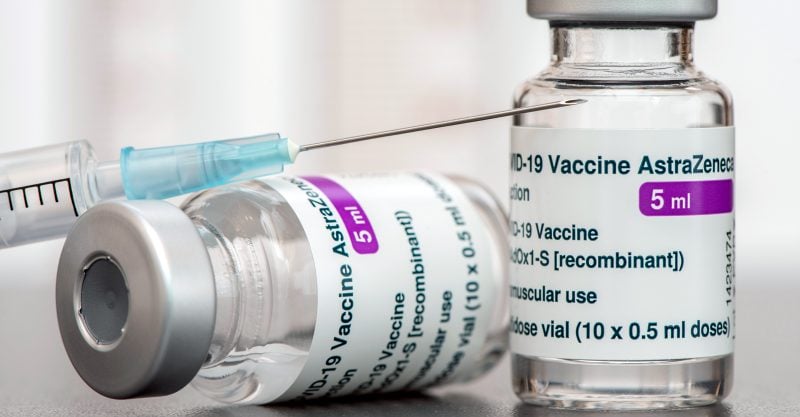 Kim Lockwood, a 34-year-old mother from South Yorkshire, died in March 2021 of a catastrophic brain bleed nine days after getting the AstraZeneca shot.

Lockwood complained of an excruciating headache eight days after getting the vaccine. Her condition quickly deteriorated and she was pronounced dead 17 hours after being admitted to the hospital.

Separately, a Sheffield County inquest on Monday concluded Tom Dudley, a 31-year old father of two who received the Astra-Zeneca vaccine on April 27, 2021, died of a vaccine-induced brain hemorrhage on May 14, 2021.

The UK’s National Health Service on May 7, 2021, changed the guidance for the AstraZeneca vaccine, suggesting healthy individuals under 40 should avoid it due to possible blood-clotting complications.

Assistant coroner Tanyka Rawden said that at the time of Dudley’s death the potentially fatal blood-clotting issue “was not a known and recognized complication of this vaccine. It seems to me that the guidelines have been changed,” she said. “They were changed very, very quickly after Tom had his vaccination.”

For both Lockwood and Dudley, the change in recommendations came just weeks too late.

In April 2021, many European countries, including Germany, France, Italy, and Spain, suspended the use of the AstraZeneca vaccine after experts found dangerous blood clots in some vaccine recipients, according to various news sources.

Research published May 5, 2021, in The BMJ confirmed evidence of blood clotting and found a small risk after receiving just one dose of AstraZeneca’s vaccine.

An AstraZeneca executive today said the British drugmaker won’t consider submitting its vaccine for approval in the U.S. if the regulatory process takes too long.  A company official said the company would instead focus on selling the vaccine in other countries, though it will continue talks with the U.S. Food and Drug Administration, according

In U.S., J&J vaccine singled out for blood-clotting disorders

Although the AstraZeneca vaccine is not offered in the U.S., it uses the same adenovirus technology as the Johnson & Johnson (J&J) COVID vaccine authorized for emergency use in the U.S.

On Dec. 16, 2021, the Centers for Disease Control and Prevention (CDC) made a “preferential recommendation” that people 18 and older get the Pfizer-BioNTech or Moderna mRNA vaccines instead of the J&J shot.

Two days earlier, the U.S. Food and Drug Administration updated its fact sheets for Emergency Use Authorization of the J&J vaccine, adding a contraindication to the shot for adults with a history of thrombosis with thrombocytopenia syndrome (TTS) following the J&J or any other adenovirus-vectored vaccine.

The agency did not add a contraindication for people with pre-existing conditions, including coagulation disorders, or for those who may have experienced blood clots after receiving an mRNA vaccine.

The FDA said TTS was reported in men and women, in a wide range of ages, with the highest rate in women aged 30 to 49. The agency noted approximately 15% of TTS cases were fatal.

According to analysis of data from the Vaccine Adverse Event Reporting System (VAERS), between Dec. 14, 2020, and March 4, 2022, there were 2,607 reports of blood-clotting disorders after administration of the J&J shot.

The Defender has reported on numerous deaths from blood-clotting disorders after the J&J vaccine, including that of Jessica Berg Wilson, a 37-year-old stay-at-home mother from Washington, who died suddenly on Sept. 7, 2021.

According to Wilson’s obituary, doctors diagnosed her with VITT.

The FDA and CDC have not issued warnings about blood-clotting disorders specific to the Pfizer and Moderna vaccines, despite studies showing the mRNA vaccines can cause similar conditions.

For example, a study published in April 2021 by Oxford University found the number of people who developed cerebral venous sinus thrombosis (CVST) after COVID vaccines were about the same for Pfizer, Moderna and AstraZeneca vaccines. (J&J is not approved for use in the EU, where the study originated.)

Another study, published in February 2021 in the Journal of Hematology, examined thrombocytopenia following Pfizer and Moderna vaccination in response to the death of a 56-year-old Florida physician — the first identified patient who died from a brain hemorrhage after receiving Pfizer’s vaccine.

The researchers could not exclude the possibility that the Pfizer and Moderna vaccines had the potential to trigger ITP and recommended additional surveillance to determine the incidence of thrombocytopenia post-vaccination.

“While the main concern associated with ITP is bleeding, it may come as a surprise that ITP is also associated with a 20% increased risk for blood clots,” said Lyn Redwood, RN, MSN, former  president emeritus of Children’s Health Defense, citing a March 8 article by Dr. Robert Bird, director of hematology at Princess Alexandra Hospital in Brisbane, Australia.

According to the latest available VAERS data, between Dec. 14, 2020, and March 4, 2022, there were 5,992 reports of blood-clotting disorders after the Pfizer vaccine, and 4,784 reports following the Moderna vaccine.

The J&J shot remains available in the U.S. and in October 2021, the FDA granted Emergency Use Authorization for the J&J booster shot for adults 18 and older.

The New York Times on Tuesday reported “mounting evidence” the Janssen vaccine is showing levels of efficacy on par with the mRNA vaccines.