A new study claims people who choose not to get vaccinated against COVID-19 face a substantially higher risk of getting in a car crash than vaccinated people, which could justify higher insurance rates for the unvaccinated, prompting critics to pounce on the study’s flaws and researchers’ motives. 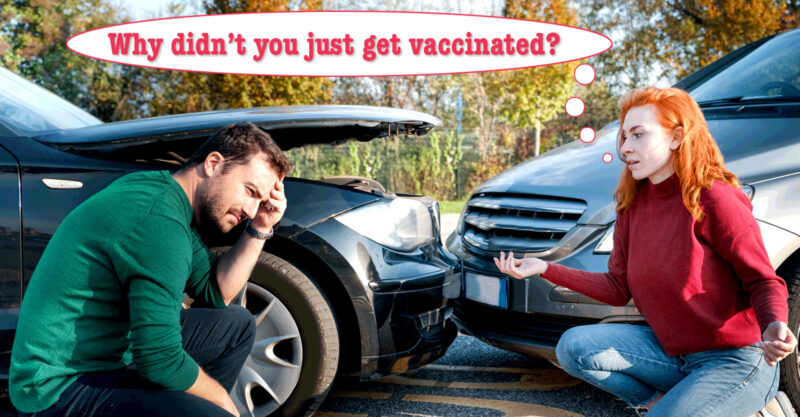 People who choose not to get vaccinated against COVID-19 face a substantially higher risk of getting in a car crash than vaccinated people, which could justify higher insurance rates for the unvaccinated, according to a study published this month in The American Journal of Medicine.

The study didn’t find that being unvaccinated causes traffic accidents. Instead, the researchers postulated that there is a psychological reason why “vaccine hesitant” people “might also neglect basic road safety guidelines.”

John Campbell, Ph.D., a nurse educator, and comedian and political commentator Russell Brand were among the critics who took issue with the study, citing its flaws and questioning the motives behind doing such a study.

Others were more blunt. Norman Fenton, Ph.D., a professor of risk information management at Queen Mary London University, accused the journal of publishing “a study in stupidity.”

Dr. Vinay Prasad, a hematologist-oncologist at the University of California San Francisco tweeted:

How stupid! Will that lower accidents? (pure speculation)

This only tells you that MMWR obs studies of VE are 💩https://t.co/6uUG7On3LM

The study’s authors analyzed encrypted government data from 178 Ontario medical centers and more than 11.2 million residents of the province, of whom 84% had received a COVID-19 vaccine and 16% had not as of July 31, 2021.

Among the study cohort, 6,682 people needed emergency care because they were involved in a serious car accident — either as a driver, a passenger or a pedestrian — during the one-month period the researchers analyzed.

Unvaccinated people accounted for 25% of the traffic accidents (1,682 cases), meaning they had a 72% increased risk of accidents relative to those who had taken the jab.

When researchers adjusted for other variables such as age, sex, socioeconomic status and other medical conditions, the relative increased risk for the unvaccinated dropped to 48%.

The researchers said their findings are significant because, “A relative risk of this magnitude … exceeds the safety gains from modern automobile engineering advances and also imposes risks on other road users.”

Although the authors noted the study did not investigate or demonstrate any causal link between being unvaccinated and risky driving, they proposed several possible causes for the correlation they found.

They thought there could be “a distrust of government or belief in freedom that contributes to both vaccination preferences and increased traffic risks.”

Other explanations, the researchers said, might be “misconceptions of everyday risks, faith in natural protection, antipathy toward regulation, chronic poverty, exposure to misinformation, insufficient resources, or other personal beliefs.”

The authors concluded that “COVID vaccine hesitancy is associated with significant increased risks of a traffic crash. An awareness of these risks might help to encourage more COVID vaccination.”

The researchers did not address numerous limitations in the data they presented, according to Campbell, who provided a full analysis of the study.

“The obvious response to that is to say, well this is ludicrous, which it is, but … [the] evidence needs to be unpacked,” said Campbell, an expert on vaccine administration.

During the study period, the unvaccinated were more likely to drive — and therefore at higher risk for accidents — yet the study did not account for differences in miles driven.

In Canada, for much of 2021, unvaccinated people could not use public transportation, which would have compelled them to drive more. Essential workers in non-healthcare settings who had to commute to work lived in neighborhoods with higher rates of COVID-19 and lower vaccination rates. Vaccinated people were more likely to work remotely or to be retired.

Contrary to the study’s implication that people in accidents were practicing “risky driving,” most cases were actually passengers or pedestrians. Of the 6,682 crashes, only 2,856 of those cases were drivers — 1,189 were passengers and 2,637 were pedestrians, whose accidents did not result from their driving practices.

Campbell reported that the study classified people as unvaccinated for 14 days after vaccination.

Given that the study lasted only a month, vaccinated people could have been characterized as unvaccinated for up to half of the study. If 602 people were misclassified in this way, the difference between the two groups disappears.

All deaths at the scene were excluded. If a cardiac or other event — possibly vaccine-related — caused the accident, it was not included in the study, Campbell said.

In a Twitter thread, Dr. Claire Craig, with the U.K.’s Queen’s College, University of Oxford, called the study “a joke,” pointing to major statistical flaws.

Using their same methodology you could estimate that the unvaccinated had a higher rate of anything:

– giving to charity
– recycling
– buying the most christmas presents

whatever you want when the levels are actually the same – because the denominator is artificially small.

Health data and the rise of biodigital surveillance

According to the study footnotes, the researchers accessed a large government dataset held at the Institute for Clinical Evaluative Sciences, which they used to analyze risk by correlating vaccination status with socioeconomic information, detailed healthcare records and other data.

They concluded that “The observed risks might also justify changes to driver insurance policies in the future.”

According to a recent investigation by ProPublica, health insurance companies are increasingly collecting vast amounts of information to determine insurance costs on an individual basis.

“With little public scrutiny, the health insurance industry has joined forces with data brokers to vacuum up personal details about hundreds of millions of Americans, including, odds are, many readers of this story.

“The companies are tracking your race, education level, TV habits, marital status, net worth. They’re collecting what you post on social media, whether you’re behind on your bills, what you order online.

“Then they feed this information into complicated computer algorithms that spit out predictions about how much your health care could cost them.”

Companies outside the narrow scope of the Health Insurance Portability and Accountability Act (HIPAA), which prohibits healthcare providers from disclosing protected patient information — from data brokers to period-tracking apps — can and do legally sell people’s health-related information, from information about their surgical procedures to their mental health conditions.

These practices can help the industry boost profits by avoiding coverage for sick people.

But they are also part of a broader trend toward digital surveillance and control through the mass collection of people’s personal data and the creation of digital IDs.

Plans for digital IDs have been in the works for several years, but they gained traction during the pandemic.

The ID2020 Alliance, founded in 2016 with seed money from Microsoft Accenture, PricewaterhouseCoopers, the Rockefeller Foundation, Cisco, and Gavi (a vaccine alliance founded by the Gates Foundation) claims to advocate in favor of “ethical, privacy-protecting approaches to digital ID,” with the mission of providing digital IDs for people worldwide by 2030.

Even prior to the COVID-19 pandemic, these organizations advocated for using health and immunization records as a way to scale up digital IDs, an idea they also promoted at the World Economic Forum in Davos.

Governments have already begun to use people’s health data to manipulate their behavior. In January, Quebec announced that it planned to place a significant “health tax” on unvaccinated people. During the pandemic, “vaccine passports” were widely required for access to public spaces.

Last month, leaders of the Group of 20 (G-20) issued a joint declaration promoting a global standard on proof of vaccination for international travel and calling for the establishment of “global digital health networks” that build on existing digital COVID-19 vaccine passport schemes.

Vaccine passports, digital identities, social credit systems, and central bank digital currencies together can form a system of digital control, computer scientist Aman Jabbi explained in a recent interview with ZeeMedia. Such a system depends on data collected through surveillance cameras, smart devices, and the increasing use of biometric data for everyday transactions.

“This is why it is all the more concerning that we are seeing again, through the process of commerce and convenience, new technology introduced that will give centralized Big Tech resources — which as you know are deeply interpolated with political and government agencies — the ability to garner more of your data.”

Warning about the conclusions of the study, he continued:

“So in a sense, you could see how a story saying that people who didn’t get vaccinated are causing car crashes while there are new investigations into the efficacy of those vaccines that were, as I recall, quite aggressively pushed means that we oughtn’t be marching open-hearted with our trousers down into the arms of data capture organizations even if they are saying that they are ultimately going to offer us other services.

“There’s enough evidence to suggest that these Big Tech platforms and data-capture giants operate in coordination with the government to push an agenda that is not beneficial to anybody but themselves.”