Kim Iversen on Vaccine Mandates: ‘Coercion Works, But Is It Ethical?’

During Tuesday’s segment of The Hill’s “Rising,” journalist and political commentator Kim Iversen said the decision to leave a job, whether because of vaccine mandates or sexual harassment, is never easy. 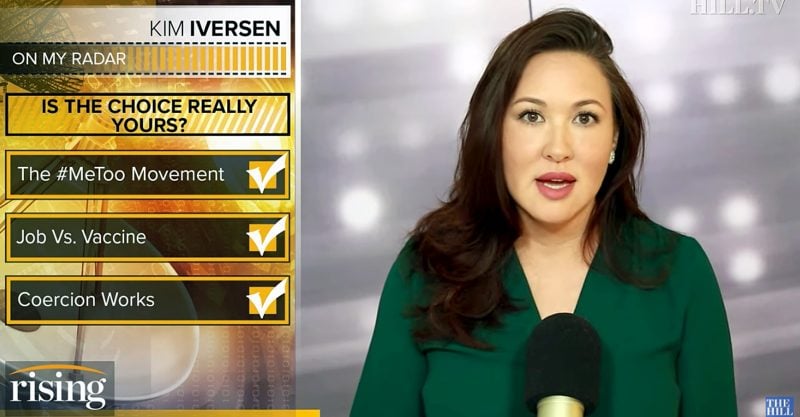 During Tuesday’s segment of The Hill’s “Rising,” journalist and political commentator Kim Iversen called out the coercive nature of COVID-19 vaccine mandates.

“Coercion works, but is it ethical?” Iversen asked.

Iversen drew comparisons between the mandates and the #MeToo movement, born out of growing public awareness of workplace sexual harassment.

“During the #MeToo movement, numerous people were confused as to why a woman would ever feel pressure to sleep with her boss to keep her job,” Iversen said.

Mimicking opponents of the movement, she said, “If your employer is forcing you to do something with your body that you aren’t comfortable with, just quit and find a new employer!”

But is the decision to leave a job really that simple, Iversen asked?

“Have these people ever dealt with the stress and anxiety of losing a job and having no idea how they’re going to pay next month’s bills? Or being faced with the job of their dreams, or a career they’ve worked years for, only to have one single demand from one single employer in one single moment threaten it all?”

Iversen said many people who might not have faced this type of coercion in the workplace are getting a dose of it right now, with vaccine mandates.

“In recent weeks many people have been forced to choose between their job and their bodily autonomy,” said Iversen.

“Doctors, airline pilots, lawyers, contractors, news anchors, teachers, nurses and more are being told they need to get the vaccine despite any of their personal objections, or lose their job.”

But every other employer in their field might also require the vaccine, Iversen said, leaving few options for those who don’t want it.

“For many people, the choice is to get an entirely new career, one that will likely bring in less money, which could cause them to lose their homes among other things, or do this one simple thing with their bodies they don’t really want to do.”

Iversen compared admonitions to “just get the vaccine even if you don’t want it” to what Harvey Weinstein reportedly told his rape victims: “It will be quick, painless and over before you know it.”

Citing New York Times journalist, Noam Scheiber, who tweeted that the United Airlines COVID vaccine mandate has been “remarkably effective” at driving up vaccine intake, Iversen said, “Sure, obviously hanging someone’s livelihood and job above their head is effective.”

“Unfortunately in these scenarios, a brief moment of physical discomfort that may or may not have long-lasting consequences seems easier than losing a job and … having to deal with an immense amount of stress and anxiety, and in some cases total ruin.”