EMF Exposure and Pregnancy Risks: Here’s What the Scientific Literature Tells Us

Electromagnetic field exposure in pregnant women is associated with a shorter pregnancy, increased fetal heart rate variability and temperature, and babies born with smaller head and chest circumferences, according to a review of scientific findings. 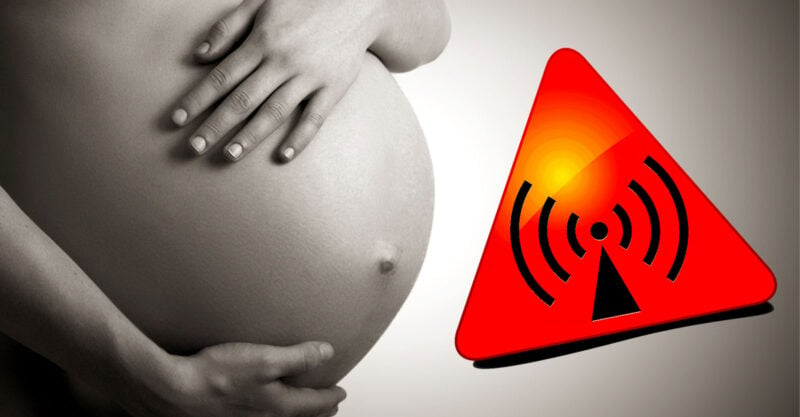 Electromagnetic field (EMF) exposure in pregnant women is associated with a shorter pregnancy, increased fetal heart rate variability and temperature, and babies born with smaller head and chest circumferences, according to a review of scientific findings.

Over the longer term, EMF exposure in utero increases a child’s risk of developing speech, hyperactivity and other inattention issues.

The review, published in February in Heliyon, adds to existing evidence that EMFs cause harm by demonstrating the effect on babies in utero.

Healthcare providers should encourage pregnant women to reduce their use of mobile devices, keep mobile devices away from their bodies and try to use devices that emit less radiation, the authors of the review concluded.

An EMF is a physical field produced by an electrically charged object.

EMFs are classified by wavelength and frequency and can be organized along a spectrum from extremely low-frequency waves (from power lines) to radio waves (which include cell phone EMFs), microwaves, infrared radiation, visible light, ultraviolet light, X-rays and gamma rays.

Some EMFs are natural, as the list above indicates, and many natural EMFs are beneficial. Other EMFs are human-made.

The human-made EMFs that pregnant women (and all of us) need to consider are radiofrequency, magnetic fields, electrical fields and dirty electricity.

Why a systematic review on EMF exposure and pregnancy?

Other popular portable electronic devices include tablets and laptops.

All these devices emit EMFs. There is considerable scientific evidence that some types of EMFs cause harm, and also that there are strategies to help reduce harmful exposure.

The authors of this systematic review noted the COVID-19 pandemic affected all aspects of our lives, and public health measures to reduce in-person contact meant many tasks and services were offered online.

This resulted in even more people, including pregnant women, using portable electronic devices for even longer periods of time.

Given this increase in exposure to EMFs, the authors of the review set out “to systematically review published studies on the direct effects of EMF radiation emitted from mobile phones on pregnancy, birth, and infant outcomes.”

Rather than conduct a new study, the authors searched the literature for existing studies on the effect of EMF exposure, allowing them to examine a large body of knowledge and see patterns that an individual study might miss.

The authors discovered that few studies investigating EMF exposure and health outcomes included pregnant women — so they expanded their inclusion criteria and reviewed all available studies published between 2016 and 2019 on the effects of EMF exposure on pregnancy outcomes and also on physiological changes in adults (not including pregnant women) exposed to EMFs.

Highlights from the review

In the end, only 18 studies met the authors’ inclusion criteria for the systematic review. Nine of the studies were specifically about the impact of EMF exposure on pregnancy — eight of those were conducted on humans and one was conducted on rats.

The review is titled “Impacts of smartphone radiation on pregnancy: A systematic review.”

Let’s dive into the findings from the RFR studies.

A large 2019 meta-analysis assessed the impact of RFR exposure. The mothers were categorized into none, low, medium and high cellphone use based on the self-reported frequency of calls per day.

The study found no association with fetal growth or birth weight.

A 2018 study on the fetus while in utero examined fetal heart rate variability, a marker of fetal wellbeing.

The fetal heart rate variability increased significantly in the normal BMI group, but not in the obese group.

There is an ideal range of fetal heart rate variability. If the variability is too low or too high, this could indicate an issue — so the important finding from this paper is that the fetus had a physiologic response to the RFR exposure, which could affect fetal health.

A 2018 model calculation of the RFR absorbed by the maternal body at 13, 18 and 26 weeks’ gestation showed exposure to RFR increased fetal temperature.

Two of the studies included in the review provided evidence of changes in infants’ measurements at birth.

One 2019 study reported pregnant women who used their mobile phones during pregnancy were more likely than those who did not use cellphones to give birth to infants with low birth weight.

The study also showed pregnant women exposed to RFR from base stations and TVs were more likely to give birth to infants with a smaller head circumference.

A 2017 study from Japan showed pregnant women who used their mobile phones excessively tended to give birth to infants with a smaller chest circumference.

What did studies suggest about long-term effect on children of mothers exposed to EMFs?

Two of the studies reviewed by the authors examined the long-term effects of mothers’ EMF exposure during pregnancy on their children.

A large 2017 study analyzed data from almost 84,000 mother-child pairs in five countries. The authors analyzed the same four birth cohorts as the 2019 meta-analysis described above, plus an additional birth cohort from Norway.

Maternal cellphone use was categorized based on the self-reported number of cellphone calls per day.

According to the study, 38.8% of mothers reported no cellphone use during pregnancy. These mothers were less likely to have a child with behavioral, hyperactivity/inattention or emotional issues.

A small 2019 cross-sectional study found using cordless phones (a source of RFR exposure) or living near power lines (a source of high magnetic fields) during pregnancy increased the risk of giving birth to children with speech problems.

Similar to the tobacco industry, Big Telecom is profiting from a highly addictive product that studies show can harm human health.

The early warning signs that smoking was a health hazard were evident by the early 1950s (in fact, as early as 1602).

Rather than accept that cigarettes were harmful to health and required regulation, Big Tobacco worked “to erode, confuse, and condemn the very science that now threatened to destroy its prized, highly popular, and exclusive product.”

As a result, the first smoking bans in enclosed workplaces didn’t go into effect until 1995 — more than 45 years after evidence showed smoking harmed human health.

As with tobacco in the 1950s, there is already considerable evidence that EMFs cause harm — wireless radiation was classified a possible human carcinogen in 2011.

The authors of this systematic review conclude more research is needed to identify the specific impacts of EMF exposure on pregnancy, birth and infant outcomes.

However, more research is not needed to justify a precautionary approach to EMF exposure during pregnancy.

“Health care providers may use this evidence to encourage pregnant women to use their mobile phones in ways which decrease the risks of harm to the woman and the fetus. Women may set limits on their use, keep mobile phones away from their bodies, or use device with very low-frequency EMF radiation.”

What are “safer” levels of EMF exposure for pregnant women? How can women know whether their exposure is below a certain safety threshold?

Unfortunately, pregnant women won’t find answers to these questions from the Federal Communications Commission (FCC), the U.S. federal agency that is supposed to regulate human exposure to RFRs.

According to a Harvard University Center for Ethics study, the FCC is a “captured agency,” meaning it is controlled by the industry it is supposed to regulate.

The FCC has not updated its health and safety guidelines for wireless-based technologies since 1996. Since then, the scientific evidence that RFR causes harm increased, the amount of RFR people are exposed to has increased and the way we use portable electronic devices has dramatically changed.

To illustrate how inadequate current FCC guidelines are, consider how our smartphones are tested before they hit the market.

According to Nick Pineault’s “The Non-Tinfoil Guide to EMFs” (pages 31 to 32), a specific anthropomorphic mannequin (SAM) is used to determine the specific absorption rate (SAR) rating of a cellphone.

The size of SAM’s head is modeled on the body of a 6-foot-2 man who weighs 220 pounds — which means his head is larger than that of 97% of cellphone users, including and especially that of a baby in utero.

Unlike real humans, SAM’s head is filled with a mix of water, salt and sugar. The cellphone is placed 5 mm away from SAM’s head at a 15-degree angle. For 6 minutes, SAM gets blasted with the amount of RFR equivalent to the highest power setting the phone can produce.

Is this test at all relevant to determining safe exposure levels for pregnant women?

This testing for the SAR of cellphones was designed to protect us from short-term heating risks due to RFR exposure based on the outdated idea that the only harmful effects of EMFs are thermal, meaning whether they increase the temperature of tissue.

However, there is abundant evidence EMFs cause harm through non-thermal effects, too.

In addition, researchers who developed a health-based exposure limit for RFR that is 20- to 40-fold lower than the FCC’s SAR limit argue children’s SAR limit should be 10 times lower than that for adults. Their calculations did not consider prenatal exposure.

Given the inadequacy of the FCC’s guidelines, and the agency’s refusal to update them, Children’s Health Defense took the FCC to court. And won!

The court’s 2021 judgment requires the case be remanded to the FCC “to provide a reasoned explanation for its determination that its guidelines adequately protect against harmful effects of exposure to radiofrequency radiation….”

How to reduce EMF exposure during pregnancy

Until policies are in place to protect consumers from EMFs, what can pregnant women do?

Given the critical stages of development that babies in utero pass through, and their well-known vulnerability to other environmental toxins, it makes sense to take a precautionary approach to EMF exposure during pregnancy.

The authors of the review suggested reducing use and increasing distance from EMF-emitting devices, and using devices that emit fewer EMFs.

While this is a start, it is not clear how much time using a smartphone may be “safe,” how far away to keep the device and how to know whether a device emits less radiation.

In a recent article in The Defender, Dr. Joseph Mercola offered tips to reduce EMF exposure.

Tips that may be of particular interest to pregnant women include:

The BabySafe Project offers a free brochure about reducing EMF exposure during pregnancy.