Are You Swimming in an Invisible Sea of EMFs? Here’s What to Do.

It's nearly impossible to avoid electromagnetic field (EMF) exposure completely, but there are practical ways to limit it. Given the number of EMFs that bombard you all day, it’s important to educate yourself about their negative impact on your health. 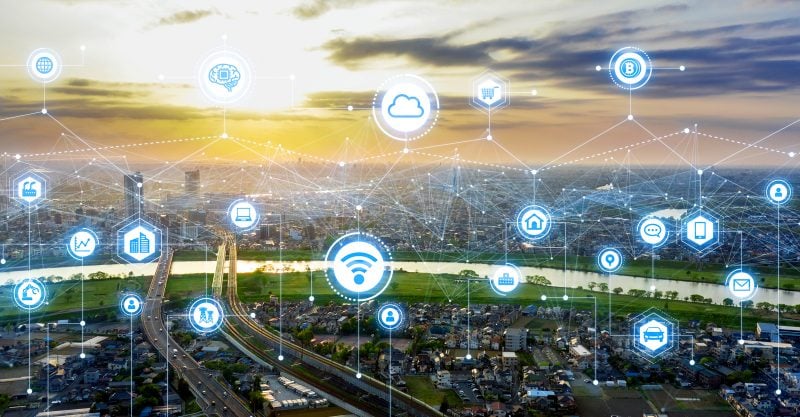 The negative effects of electromagnetic fields (EMFs) continue to ignite conversations and controversy worldwide. The most dangerous pollution affecting you is the invisible sea of EMFs your body swims in daily.

You are exposed to EMFs all day long, not only in public but inside your home, too. Most of the radiation emits from cellphones, cell towers, computers, smart meters and Wi-Fi, to name just a few of the culprits.

While it’s nearly impossible to avoid EMF exposure completely, there are practical ways to limit it. Given the number of EMFs that bombard you all day long, getting educated about the negative effects of EMFs is imperative to your well-being.

Particularly if you are dealing with a serious illness, it is well worth your time to reduce your EMF exposure as much as possible. If you have been told EMFs are safe and not a danger to humans, you may want to consider:

According to the National Institute of Environmental Health Sciences, EMFs are “invisible areas of energy, often referred to as radiation, that are associated with the use of electrical power.”

Most agree on the hazards associated with ionizing radiation, which is why the dental hygienist covers you with a lead apron when taking X-rays. Similarly, you would expect to get sunburned if your bare skin is overexposed to the sun’s powerful UV rays.

Ionizing radiation is generally believed to have enough energy to break the covalent bonds in DNA but actually most of the damage is due to the oxidative stress resulting in excessive free radicals.

The type of EMF your cellphone emits is in the microwave 2 to 5 gigahertz range. Besides your cellphone, electronics such as baby monitors, Bluetooth devices, cordless phones, smart thermostats and Wi-Fi routers consistently emit microwave radiation at levels that may damage your mitochondria.

Interestingly I have reviewed a number of studies that show double and single strand DNA breaks are actually higher when exposed to nonionizing microwave radiation than ionizing radiation. This is believed to be due to the excessive oxidative stress that microwave exposure induces.

Martin Pall, Ph.D., professor emeritus of biochemistry and basic medical sciences at Washington State University, has identified and published several papers describing the molecular mechanisms of how EMFs from cellphones and wireless technologies damage humans, animals and plants. Many studies indicate your intracellular calcium increases with exposure to EMFs.

Pall also discovered a number of studies showing that you can block or greatly reduce the effects of EMFs using calcium channel blockers — medication commonly prescribed to patients with heart disease.

Notably, it is the excess calcium in the cell and increased calcium signaling that are responsible for a vast majority of the biological effects of EMFs.

Pall discovered no less than 26 bodies of research asserting that EMFs work by activating voltage-gated calcium channels (VGCCs), which are located in the outer membrane of your cells. Once activated, they allow a tremendous influx of calcium into the cell — about 1 million calcium ions per second per VGCC.

When there’s excess calcium in the cell, it increases levels of both nitric oxide (NO) and superoxide. While NO has many beneficial health effects, massively excessive amounts of it react with superoxide, forming peroxynitrite, which is an extremely potent oxidant stressor.

Peroxynitrites, in turn, break down to form reactive free radicals, both reactive nitrogen species and reactive oxygen species, including hydroxyl radicals, carbonate radicals and NO2 radicals — all three of which do damage. Peroxynitrites also do their own damage.

All this to say EMFs are not having a thermal influence — they are not “cooking” your cells as some suggest. Rather, EMF radiation activates the VGCCs in the outer cell membrane, triggering a chain reaction of devastating events that, ultimately:

Once formed, peroxynitrite reacts relatively slowly with biological molecules, making it a selective oxidant. Inside your body, peroxynitrites modify tyrosine molecules in proteins to create a new substance, nitrotyrosine and nitration of a structural protein.

Significant oxidative stress from peroxynitrites may also result in single-strand breaks of DNA. This pathway of oxidative destruction triggered by low−frequency radiation emitted from mobile devices may partially explain the unprecedented growth rate of chronic disease since 1990. This, truly, is a far greater concern than brain tumors, when it comes to the hazards of cellphones.

Once you understand cellphones can contribute to these chronic diseases — not just brain tumors — you may be more motivated to limit your exposure. Although the top health threats continue to be cardiovascular disease, cancer and infections, the rates of increase noted for the following diseases and disorders is astounding. Some of them were not even public knowledge prior to 1980.

Are you affected by one of these EMF-related health problems?

When VGCCs are activated in your brain, they release neurotransmitters and neuroendocrine hormones. Elevated VGCC activity in certain parts of your brain has been shown to produce a variety of neuropsychiatric effects. Among the most common consequences of chronic EMF exposure to your brain are:

While EMFs may not be the sole cause of heart problems, it is very likely a significant factor and one worthy of further investigation, especially if you are taking a heart medication. The most common heart issues that have been tied to EMF exposure include:

If you are a man, EMF exposure can increase your risk of infertility, especially if you routinely carry your cellphone in a pants pocket near your groin and/or use your laptop on your lap.

Besides those associated with reproduction, you have a number of other sensitive organs in that general area, including your bladder, colon, kidneys and liver, all of which are susceptible to damage from radiation.

If you are a woman, your risk of breast cancer is higher if you regularly carry your cellphone in your bra. Generally, the most common location for breast cancer is the upper, outer quadrant

When the cancer is located in the upper, inner quadrant, however, it’s more likely to be related to cellphone radiation (if you’ve been carrying your phone in your bra).

Ways to reduce your EMF exposure

Below are some tips to reduce your EMF exposure:

While you may think the majority of your radiation exposure comes from outside your home, most of it is very likely coming from the items inside your home and the homes of your closest neighbors.

Due to their proximity, particularly if you live in an apartment or condo, it may be worth your time to educate your neighbors about the dangers of wireless technology, including cordless phones, smart meters and Wi-Fi.

Certain nutrients may help protect your body from EMF damage

While making changes to your physical environment is of the utmost importance, there are a few nutritional interventions you can consider to help protect your body from EMFs. My recommendations include:

You can activate Nrf2 by consuming Nrf2-boosting food compounds such as sulforaphane from cruciferous vegetables, foods high in phenolic antioxidants, the long-chained omega-3 fats DHA and EPA, carotenoids (especially lycopene), sulfur compounds from allium vegetables, isothiocyanates from the cabbage group and terpenoid-rich foods.

Children at greater risk than adults from EMFs

Sadly, most of our youth have widely adopted the wireless revolution and it is your responsibility to teach your children these dangers.

Many kids have cellphones and wireless tablets before the age of 5 and many children sleep with their phones on or under their pillows. This is exposing them to a far more serious health threat than their grandparents had when they were smoking as adolescents.

The opportunity to experience greater mitochondrial damage over time is exponentially greater for children than it is for adults. Many kids today are growing up completely enveloped in technology.

They carry cellphones at younger and younger ages, use computers and tablets beginning in the early school years and play internet-based video games, to name just a few of their EMF-related activities.

Depending on the habits of their parents, especially their mothers, many children were exposed to EMFs even before they were born. Particularly as it relates to cellphone use, EMF radiation penetration is deeper in kids than adults since their skulls are thinner.

Regarding the use of cellphones within the pediatric population, Ronald L. Melnick, scientific adviser for the Environmental Health Trust, said:

“The penetration of the cellphone radiation into the brain of a child is deeper and greater. Also, the developing nervous system of a child is potentially more susceptible to a damaging agent.”

“EMFs can pass deeper into a child’s brain than an adult’s. The brain is still developing through the teen years, which may make children and teens more sensitive to EMF exposure.”

It’s important to take precautions now to protect your children, especially because the damage done by EMF radiation can take years, and sometimes decades, to develop.

While there is no reliable way to predict the long-term effects on children, one study, involving more than 13,000 mothers, revealed some sobering potential effects. Upon viewing these statistics, I hope you will take steps today to reduce your EMF exposure, both for the health of your child and your own well-being. As compared to children born of mothers who did not use cellphones during pregnancy, children born of mothers who did experienced a: