Children’s Health Defense plans to sue the Los Angeles County Board of Supervisors after the board on Tuesday passed two ordinances allowing for the fast-tracked proliferation of wireless infrastructure without due process and without residents’ right to appeal. 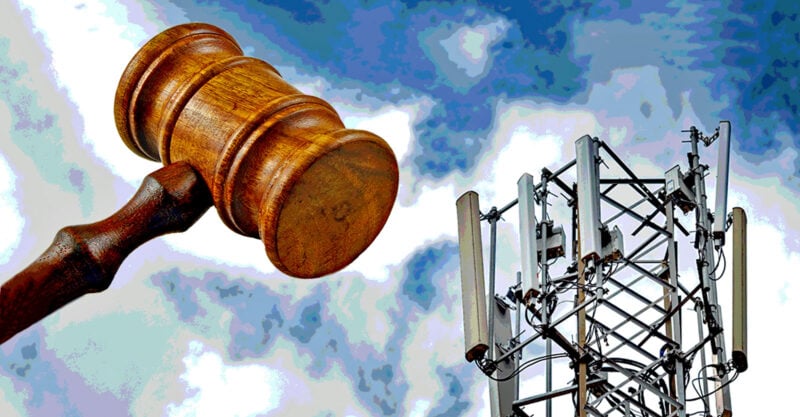 Children’s Health Defense (CHD) plans to sue the Los Angeles (L.A.) County Board of Supervisors after the board on Tuesday passed two ordinances allowing for the fast-tracked proliferation of wireless infrastructure without due process and without residents’ right to appeal.

“The board voted 5-0 to betray their county residents, let big telecom put dangerous towers everywhere, ruin more families’ lives through the harms of RF [radio frequency] exposure, pave the way for more surveillance and ignore all the environmental destruction that will ensue.

“We cannot let this stand.”

CHD has retained McCollough, a former Texas assistant attorney general and telecom and administrative law attorney who told The Defender CHD intends to sue the county over its disregard of environmental law and residents’ rights.

“We will continue to fight on behalf of the people of L.A., California and the entire country. Policies implemented in California rarely stay there, they quickly spread to other states.

“We need to stop this free pass for telecom giants while we still can, so we will take L.A. County to court.”

In addition to legal pressure, McCollough said, “Let it be known the residents will be remembering this one come next election.”

The two ordinances — amendments to title 16 and title 22 of the Los Angeles County Code — establish regulations for small-cell wireless communication facilities on highways and for wireless facilities on private property in the unincorporated areas of L.A. County and associated provisions.

According to Fiber First Los Angeles County (Fiber First LA), a nonprofit that promotes fiber optic networks over wireless infrastructures, the amendments strip residents of the right to have a voice in how wireless technology is deployed in their own neighborhoods by removing “public notice, setbacks, oversight, safety and environmental review, and any opportunities for appeal.”

The ordinances also stipulate that small-cell projects may not have to comply with California environmental law, Fiber First LA said.

The board last month delayed a scheduled vote on the ordinances due to public opposition. But members of Fiber First LA said the board on Tuesday paid little attention to extensive public opposition — including the more than 37,570 messages CHD generated to the supervisors before the meeting.

“Despite overwhelming opposition from local citizens and support from across the country, the Los Angeles Board of Supervisors voted unanimously on Jan. 10 to adopt changes to its zoning code supported by the wireless industry.

“Citizens have been stripped of their rights, fire and safety concerns have been ignored, critical environmental protections have been dismissed, and any checks on the wireless industry have been virtually eliminated.

“We are proud of our work to bring science and facts to the board, and while we are disappointed at the result, we are not finished speaking truth to power.

“To all of you who helped in this effort, our sincere thanks. Your support kept us going, and will keep us fighting.”

Brenda Martinez, an L.A. County resident and activist on the executive committee of Fiber First LA who testified at Tuesday’s meeting, told The Defender the “hypocrisy” in the room was “palpable.”

“The board of supervisors started the meeting acknowledging they were on Tongva land, and yet they completely disregarded a written plea from the Keetoowah people to reverse the categorical exemption from the state environmental law, the California Environmental Quality Act (CEQA) and oppose titles 16 and 22,” Martinez said.

“They awarded and recognized the life-long social fights and environmental victories of the prominent L.A. pastor Monsignor John Morreta among marginalized communities — yet disregarded his written plea in opposition to the ordinances.

The ordinances could result in thousands of wireless transmitters popping up across unincorporated areas of L.A. County in the next few years, Public News Service reported.

Fiber First LA accused the telecom industry of trying to manipulate public perception on the issue.

In an urgent memo, Fiber First LA told board members Verizon submitted through the public comment portal a petition allegedly signed by more than 1,000 L.A. County residents asking board members to approve proposed changes to titles 16 and 22 — but that many of the signatures were fraudulent.

“Members of the executive committee of Fiber First LA are currently examining the list of names of purported signatories, and we wanted to alert you to our findings to date,” they wrote, adding that the petition was ostensibly generated by a “Verizon-led initiative” called Communities for a Connected Future.

According to Fiber First LA:

“Many of the alleged signers of the petition either (1) deny ever having signed any such petition, (2) are known minors or individuals who are deceased, or (3) do not exist in any public record.

“We have contacted dozens of individuals whose names appear on the petition. So far, not one individual has acknowledged signing the document.

“While we collect evidence of individuals who dispute the use of their names to support Verizon’s effort to adopt the new telecom-friendly code revisions, we ask that you remove the letter from the public record and ignore its fraudulent contents.”

Nonetheless, the board members chose to approve the amendments, allowing for streamlining of wireless rollout and effectively ignoring the evidence of fraudulent manipulation of public opinion by Verizon, Fiber First LA noted.

The originally scheduled Dec. 6, 2022, vote was delayed because the board said “unanswered questions” remained that couldn’t be addressed in time to meet the deadline for public comments.

L.A. County staff recommended some last-minute changes to the proposed amendments that likely facilitated their passing on Tuesday, McCollough told The Defender.

“The actual wording is not yet available, but based on two supervisors’ descriptions, they appear topical and will not materially solve any of the significant policy and legal issues we raised,” McCollough said.

Fiber First LA also emphasized that the last-minute changes did not “meaningfully address the concerns raised by the Board of Supervisors or those we have brought to the board’s attention.”

In a letter to the board, Susan Foster — co-founder of the nonprofit California Fires & Firefighters and a member of Fiber First LA who attended Tuesday’s meeting — said that the proposed changes were “nothing more than window dressing.”

Foster, who spoke during the public comment section at Tuesday’s meeting, said that the proposed changes “look inviting but are completely meaningless and deceptive.”

In their letter to the board, the United Keetoowah Band of Cherokee Indians (UKB) reminded the supervisors that they successfully sued the Federal Communications Commission (FCC) in 2019, after the FCC gave a National Environmental Protection Act (NEPA) categorical exemption to small-cell tower projects based on the proposition that the projects were “inherently unlikely to trigger environmental and historic preservation concerns.”

Using similar logic to that of the FCC, L.A. County staff recommended that wireless-related provisions through amendments to titles 16 and 22 should be exempt from any environmental or historical evaluation based on a purported “categorical exemption.”

Additionally, Fiber First LA warned the board there likely would be “massive and irreversible adverse environmental consequences” if the cell tower projects allowed via the changes to titles 16 and 22 were granted categorical exemption from CEQA.

“It is truly disturbing that CEQA is not considered necessary by the L.A. Board and logic tells you that when installing hundreds or potentially thousands of small cells, there is a footprint that needs to be considered,” First Fiber LA co-chair Jodi Nelson told The Defender.

“Logic also tells you that at least a small percentage of this infrastructure will have environmental impacts, just based on their footprint — not even considering emissions — and that some of this equipment will potentially be sitting on ecologically vulnerable sites,” said Nelson, who accused the county of allowing telecom to “dictate environmental policy.”

The UKB said their 2019 lawsuit victory shows that categorical exemption already has a precedent of not holding up in court.

The 2019 legal battle came about when FCC officials claimed they could deploy thousands of wireless antennae for 5G capabilities without meeting tribal consultation requirements by arguing the projects were not defined as “undertakings” under the National Historic Preservation Act or “major federal actions” under NEPA.

However, the U.S. Court of Appeals for the District of Columbia Circuit — after hearing oral arguments from the UKB and 20 other joining tribes — ruled that the FCC must uphold tribal consultation requirements for small 5G cell tower deployments.

In August 2021, the District of Columbia Circuit ruled against the FCC and in favor of CHD, and called for the FCC to reevaluate its wireless radiation exposure standards because it had failed to consider the non-cancer evidence regarding adverse health effects of wireless technology.

In the 2019 UKB case, the court found the FCC’s choice to skirt U.S. environmental and historical preservation law “arbitrary and capricious” because it “did not adequately address the harms of deregulation or justify its portrayal of those harms as negligible.”

Moreover, the court concluded that the FCC “failed to justify its confidence that small cell deployments pose little to no cognizable religious, cultural, or environmental risk, particularly given the vast number of proposed deployments.”

The UKB reminded the board that “Los Angeles County has more Native Americans than any other county in the country,” adding:

“Fire can damage Native American homes, lands, and artifacts that are irreplaceable.”

By allowing the proliferation of wireless towers without due regard, they said, board members “would be failing to take into account location in sensitive areas, the overall environmental, radiation, and energy usage of 5G antennae.”

“And you would be ignoring the fire risks in a state that cannot afford more fires,” they added.

“Telecom will still be left to police telecom and you will have another telecom-initiated Malibu Canyon Fire on your hands or another fire from [Southern California Edison’s] own telecom facilities as with the Woolsey Fire in 2018,” she said, noting that the latter fire burned for over a month and caused more than $6 billion in damages.

Foster added that some key L.A. County officials have had a long history of being “enmeshed” with the telecom industry — and that the impact of such enmeshment was evident in Tuesday’s vote.

Foster told The Defender she heard from reliable sources of six-figure signing bonuses when a macro tower is allowed in a profitable city, such as the city of Los Angeles or other coastal cities.

“That really is a ‘bonus’ for doing business with telecom,” she said.

It’s extremely rare, Foster added, that local leaders are “willing to go to the trouble of finding out what’s really happening in communities where cell towers have been put in people’s midst.”