The Centers for Disease Control and Prevention on Tuesday scrubbed a recommendation from its website that U.S. travelers wear masks to protect against monkeypox. Meanwhile, the U.S. Department of Health and Human Services doubled its order for monkeypox vaccines. 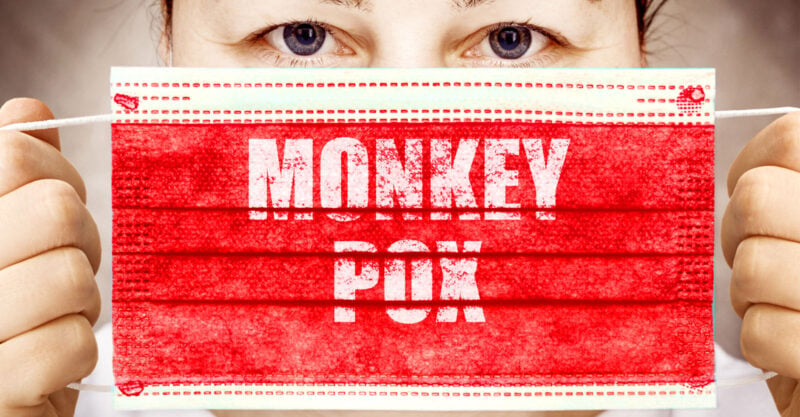 The Centers for Disease Control and Prevention (CDC) on Tuesday scrubbed a recommendation from its website that U.S. travelers wear masks to protect against monkeypox, stating health officials wanted to avoid “confusion” after experts emphasized the disease is not airborne.

The move came just one day after the CDC raised its monkeypox alert to level 2 (the highest is level 3), advising Americans to take precautions while traveling but suggesting  Americans don’t need to cancel travel plans.

“It’s definitely not airborne, and it takes a lot of contact to get it,” Gandhi said, “which is why we don’t think it’s a major risk to the general population.”

The CDC’s official statement on the transmission of the disease explains:

“Monkeypox spreads between people primarily through direct contact with infectious sores, scabs, or body fluids. It also can be spread by respiratory secretions during prolonged, face-to-face contact.

“Monkeypox can spread during intimate contact between people, including during sex, as well as activities like kissing, cuddling, or touching parts of the body with monkeypox sores.”

“At this time, it is not known if monkeypox can spread through semen or vaginal fluids.”

Monkeypox is usually endemic to Central and West African nations, but the recent outbreak across North America, Europe and Australia has confounded health professionals and raised fears of community spread, CNBC reported.

The CDC’s level 2 alert recommendations include:

In response to the recent uptick in monkeypox cases and the heightened CDC alert, the U.S. Department of Health and Human Services (HHS) on Monday said it was doubling its previous order for the Jynneos monkeypox vaccine, bringing the total to 72,000 vaccines.

Danish drugmaker Bavarian Nordic announced last month that it is contracting with the U.S. to manufacture a freeze-dried version of the Jynneos vaccine. HHS bought 36,000 doses of the Jynneos monkeypox vaccine on May 18.

“We have been preparing for moments like this through the ongoing work of the Biomedical Advanced Research and Development Authority and the Strategic National Stockpile,” Dawn O’Co​nnell, HHS assistant secretary for preparedness and response, wrote on Monday.

O’Connell said the Strategic National Stockpile would work with local communities to support demands for a vaccine, but “at this time, we do not anticipate the need for widespread, mass deployment of vaccines and treatments.”

She also stressed that the Jynneos vaccine purchased by the HSS is approved by the U.S. Food and Drug Administration (FDA).

The Jynneos vaccine is the only vaccine fully licensed for use against monkeypox, although other, riskier smallpox vaccines appear to offer limited protection, according to Science.

The Jynneos vaccine uses technology developed by German microbiologist Anton Mayr. Mayr took a strain of vaccinia and replicated it in 1959, creating a Modified Vaccinia Ankara (MVA), which produced an immune response that appeared to provide protection against smallpox.

“With smallpox eradicated in 1980, [the vaccine] disappeared into the freezer,” Gerd Sutter, a virologist at the Ludwig Maximilian University of Munich, who has studied Mayr’s vaccinia strain for years, told Science.

The World Health Organization (WHO) is endorsing a strategy called “ring vaccination,” which involves vaccinating the contacts of confirmed smallpox — or in this case, monkeypox — patients.

The WHO calls for administering the Jynneos vaccine within 4 to 14 days of exposure to monkeypox.

The U.S., U.K., Canada and several other countries are ring vaccinating by offering the Jynneos vaccine to contacts of identified monkeypox cases, including healthcare workers and sexual partners.

Some scientists, who argue it’s too hard to reach all of a patient’s contacts, advocate for broader vaccination campaigns in the population most affected so far: men who have sex with men (MSM).

So far, though, uptake has been low, possibly because of the cultural stigma sometimes attached to MSM sexual behavior.

While monkeypox is not considered to be a sexually transmitted disease, it is believed people who are involved sexually, are likely to be having lots of intimate skin-to-skin contact, which results in transferring the virus.

Another reason, Titanji said, is the increase in contentious politicization of vaccines seen during COVID-19.

Meanwhile, the efficacy of a monkeypox vaccine is still in question, according to Ira Longini, a biostatistician at the University of Florida who is advising the WHO.

“The truth is, we don’t know the efficacy of any of these monkeypox vaccines,” Longini told Science.

As Politico reported Tuesday, antiviral treatments for monkeypox do exist.

One of these is Tecovirimat, an FDA-approved smallpox treatment that has shown to be safe, though it cannot be taken alongside some medications.

Another is Brincidofovir, FDA-approved for smallpox under the animal rule, which allows drugs to be approved with data from animal studies when human trials are deemed unethical.

A new ‘opportunity’ for contact-tracing technology?

Monkeypox “offers a new cause for contact tracing,” Axios reported Tuesday, pointing out that proponents of contact tracing who were disappointed by the tool’s relative lack of effectiveness in mitigating the spread of airborne COVID-19 are now excited about the possibility of putting the technology to use for monkeypox — because the disease is spread through physical contact.

But negative public opinion of contact tracing is thwarting such endeavors, some experts say.

“Health departments should be capable of doing contact tracing — the only thing that concerns me is the public reaction to it,” Richard Garfein, an epidemiologist at the University of California San Diego School of Public Health, told Axios.