In an interview with The Defender, Deborah Brenner said some doctors “were totally against” connecting her son’s heart damage to the COVID vaccine when he suffered an adverse reaction just days after receiving his first dose of the Moderna vaccine. 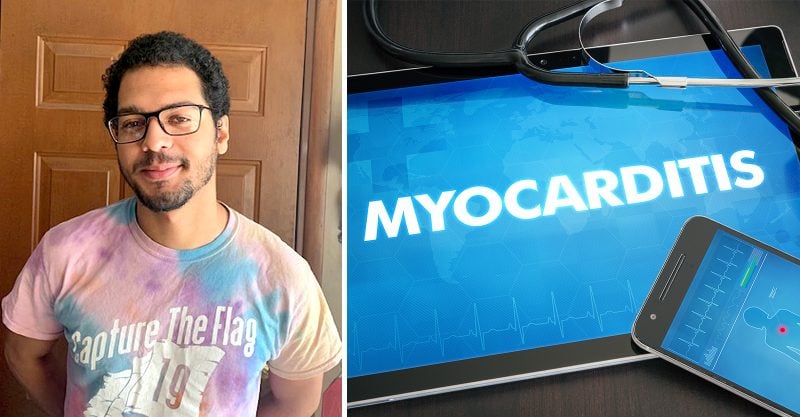 Christopher Brenner, a healthy 25-year-old from Ohio, was hospitalized with severe heart inflammation after receiving his first dose of Moderna’s COVID vaccine.

In an exclusive interview with The Defender, Christopher’s mother, Deborah Brenner, said she was frustrated when cardiologists initially pretended everything with her son was fine, and later refused to acknowledge his heart inflammation was caused by the vaccine.

After receiving his first Moderna vaccine on July 22, Christopher developed a fever. Within five days he was experiencing chest pain so intense he was unable to sleep, his mother said.

“He was concerned,” Brenner said. “He thought maybe he had something that could be contagious at that point.”

Brenner said her son wanted to go to the doctor to make sure he wasn’t going to get anyone else sick, so he went to the Defiance Mercy Clinic. “As soon as they found out what was going on they took him to the hospital attached to the clinic,” she said.

When Christopher was in the ER, doctors ran some tests and found his troponin levels were high. “I was alarmed at that point,” Brenner said.

According to Dr. Hooman Noorchasm, a cardiothoracic surgeon and patient safety advocate, doctors can detect evidence of heart damage, or tell if someone has suffered a heart attack, by measuring the patient’s blood troponin level.

Troponin, a protein, is normally undetectable in healthy persons who are not having a heart attack or are not experiencing myocarditis, Noorchasm said.

But when the heart muscle is attacked by the immune system, the damaged cells release troponin into the bloodstream. The more damage there is, the greater the concentration in the blood.

In an interview, 18-year-old Isaiah Harris + his father described how Isaiah had to be hospitalized within 48 hours of his second dose of the Pfizer vaccine + subsequently had a heart attack.#TheDefender: SIGN UP TODAY–> https://t.co/UTTfyj2wHihttps://t.co/Ie2T3leoid

“One of the ER nurses mentioned it could be myocarditis from the vaccine, but everyone else played it down like it was serious — but wasn’t a big deal,” Brenner said. “When his numbers jumped higher, that’s when it became more serious.”

When nurses took Christopher’s troponin level a second time it was higher, so they kept him overnight.

According to researchers at the National Organization for Rare Disorders, myocarditis can result from infections, but “more commonly the myocarditis is a result of the body’s immune reaction to the initial heart damage.”

After observing Christopher overnight, the next morning his caretaker team tested his troponin level a third time, and found it was even more elevated. Chirstopher was transferred by ambulance to St. Vincent Hospital in Toledo. When they arrived at St. Vincent, Christopher’s troponin level had jumped again.

“I started freaking out because they were acting like it was no big deal. I said there is something wrong because his numbers should not be going up like that. And they wouldn’t do anything to try and figure out what was going on. They just played it all down.”

Benner said the cardiologists in Toledo were totally against connecting the reaction to the vaccine. “They didn’t want to go there, didn’t want to talk about it and just said his numbers would come back down,” she said. “I was getting really frustrated because I was wondering what was going on in his heart that we couldn’t see.”

Benner said she spoke with the cardiologist in Toledo only on the first day they were there. The remaining days they worked with the nurse practitioner or internists.

“One of the internists said he was going to try and rule everything else out first,” Brenner said. “He explained myocarditis was treatable, but it was going to be a long process. But  the cardiologist had previously told us Christopher was fine and he could go back to doing whatever he was before,” Brenner said.

Brenner said she told the doctors her son was not fine. “There’s something going on with the heart,” Brenner said. “His numbers are still very elevated.”

After four days of being hospitalized and treated with blood thinners and beta blockers, Christopher was discharged. The discharge doctor told Brenner he didn’t know why the other physicians didn’t want to admit her son’s reaction was caused by the vaccine.

According to the CDC, healthcare providers are legally required to report serious adverse events regardless of causality, including life-threatening adverse events, inpatient hospitalization and important medical events that — based on appropriate medical judgement — may jeopardize the individual and may require medical or surgical intervention. However, there is no mechanism in place to enforce the law.

Christopher, who has taken time off work to recover as he still has chest pain and was told to limit his activities, was exposed to COVID in December but thought getting the vaccine was the “right thing to do.” Brenner said her son was influenced by the mainstream media messaging that if he didn’t get vaccinated, other people could die.

Both Brenner and her husband also got COVID vaccines, despite having had COVID, because she had a severe case and was told natural immunity was good for only 90 days.

“I was told if I got infected again, it would be much worse,” she said.

Brenner suffered an adverse reaction that landed her in the hospital after her second vaccine dose. Her adverse event was not reported to VAERS by her physicians, as required.

Benner said she cannot say with 100% certainty she’s against the vaccine, but it was very scary.

“I trusted what my doctor told me and — in a sense — the vaccine makes you feel safer,” she said. “But the risk is very high if you get vaccinated and you just don’t know what reaction you could have.”

Brenner said if she and her son had to get the vaccine again, they don’t know if they would do it. She encouraged anyone questioning the vaccine to be brave and speak up from a parent standpoint and request help. “Don’t be afraid to speak out or question things with the vaccine,” she added.

According to the latest data from VAERS, there have been 2,018 U.S. reports of myocarditis and pericarditis following COVID vaccines, with 1,275 cases attributed to Pfizer, 667 cases to Moderna and 71 cases to J&J’s COVID vaccine.

The U.S. Food and Drug Administration (FDA) on June 25 added a warning to patient and provider fact sheets for Pfizer and Moderna COVID vaccines suggesting an increased risk of myocarditis and pericarditis — particularly following the second dose and with onset of symptoms within a few days after vaccination.

The FDA’s update followed a review of information and discussion by the ACIP during a  June 23 meeting where the committee acknowledged 1,200 cases of heart inflammation in 16- to 24-year-olds, and said mRNA COVID vaccines should carry a warning statement.

Health officials said the benefits of receiving a COVID vaccine still outweigh any risks. Physicians and other public commenters accused the CDC during the meeting of exaggerating the risk to young people of COVID and minimizing the risk of the vaccines.

Pfizer and its vaccine partner BioNTech submitted an application in May to the FDA requesting full approval of its COVID vaccine.

Dr. Anthony Fauci, director of the National Institute of Allergy and Infectious Diseases and chief medical advisor to President Biden, said Sunday he is hopeful the FDA will give full approval to Pfizer’s COVID vaccine by the end of August, and he predicted a wave of vaccine mandates would soon follow.