1 in 10 Surveyed Doctors Believe COVID Shots Aren’t Safe — But Is the Number Even Higher?

A survey of primary care physicians conducted 11 months ago revealed one in 10 doctors don’t believe COVID-19 vaccines are safe or effective. Given what has transpired since that number is likely much higher. 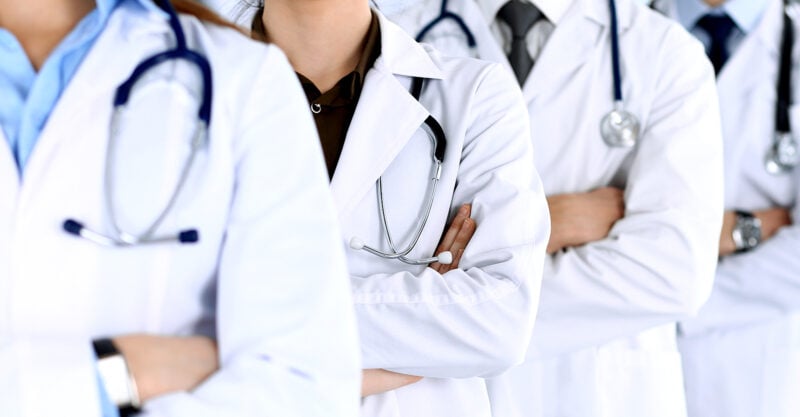 One in 10 primary care physicians don’t agree COVID-19 vaccines are safe, and 9.3% don’t believe the vaccines are effective, according to a survey conducted between May 14 and May 25, 2021.

The findings were published in the April 2022 issue of Vaccine.

Researchers at the Texas A&M School of Public Health asked 625 primary care physicians whether they strongly agreed, somewhat agreed, neither agreed nor disagreed, somewhat disagreed or strongly disagreed with the following three statements:

Here is a summary of their findings:

“Confidence in vaccines among physicians was still higher than in the general public, as were rates of COVID-19 vaccination, with only 5.2% still unvaccinated at the end of the survey in May 2021.”

Callaghan said he and his colleagues were surprised that approximately 1 in 10 surveyed physicians did not believe the vaccines were safe or effective.

Nevertheless, only 1 in 20 of those surveyed remained unvaccinated. This suggests some vaccine-hesitant doctors complied because of employer regulations, and others voluntarily got vaccinated at some point but subsequently changed their minds because of their personal experience or the experience of their patients.

Callaghan did not mention there was a nearly equal or greater percentage of doctors who strongly disagreed the vaccines were safe (4.8%) and effective (6.7%) compared with the general public (4.9% and 2.1%).

Moreover, when it came to answering the question, “Are vaccines important?” doctors strongly disagreed more than twice as often as the public (5.8% versus 2.3%).

Why are physicians hesitant?

The authors stated in their paper:

“While it is helpful, albeit troubling, to realize that a non-trivial proportion of primary care physicians lack confidence in vaccines like the general public, investigating what factors predict beliefs in vaccine safety, effectiveness, and importance can help us better understand why many physicians lack vaccine confidence.”

If the authors of the survey find the physicians’ lack of confidence in these experimental products “troubling,” it’s clear they (the authors) assume the vaccines are safe and effective.

“Most physicians are well-positioned to serve as our leading vaccine promoters. With that said, 10% is a pretty big proportion to be hesitant. It suggests, for that 10%, we need to do some work in terms of education and potentially, intervention, to increase the level of confidence in that population of physicians so that we’re not at 90% in favor of promoting vaccination, but that it’s closer to 100%.”

Why were 10% of doctors getting it “wrong”? Callaghan wondered.

Physicians were also asked about their age, income, race, political views (ranging from extremely liberal to extremely conservative), location, religious views and whether they previously had COVID.

There were only two negative predictors of whether a physician would trust the vaccines’ safety and efficacy that were statistically significant: political conservatism and previous bout with COVID.

Callaghan et al pointed out the danger posed by conservative-leaning physicians to the general public:

“Conservatives (in the public) with vaccine hesitancy, served by physicians who share their political views, may therefore miss out on opportunities to be presented with information about the benefits of vaccination; especially in rural areas where both hesitancy and self-identification with right-leaning political views are particularly high.”

Why should political affiliation have anything to do with the science behind the safety and efficacy of vaccines?

It doesn’t — but it points to the actual driver of opinions around “the science:” selection of media sources.

“And given the clouded information environment that surrounded COVID-19 in particular, and increasingly, vaccines in general, it remains possible that [physicians] are just relying on what they’re hearing in the news and the misinformation that’s out there, as opposed to best scientific evidence.”

This statement should alarm the public.

Are physicians abdicating their role as medical authorities by allowing the media to be the arbiters of truth with regard to vaccinology?

Callaghan’s survey results suggest that they are.

Is it really just politics?

While political affiliation did appear to play a role in beliefs, Callaghan noted a wider problem that might be at play.

“There’s not that much training on vaccines and vaccinology … in medical school,” he said. “Most medical students aren’t exposed to in-depth discussions of virology to have those strong opinions.”

Callaghan’s survey and his interpretation of it tell an interesting story.

He correctly points out that physicians receive little training in vaccinology. But if that’s true, why then would he expect most physicians will have the right idea about the whole thing to begin with?

Isn’t it more logical that it is the minority of doctors, those who are vaccine-hesitant, who have a better grasp of the issue?

Did this possibility never occur to Callaghan and his colleagues?

Callaghan, who is an assistant professor at Texas A&M’s School of Public Health, does not have a graduate education in virology, epidemiology, biology or even public health.

His doctorate is in political science.

Perhaps this explains his superficial understanding of medical education. Young doctors do not leave medical school strongly believing that vaccines are not safe or effective.

The fact that 4.8% of surveyed physicians strongly believe COVID vaccines are not safe and 6.7% strongly believe they are not effective suggests that they have changed their minds based on personal experience or their own exploration of the topic.

Arriving at an accurate understanding of COVID vaccine safety and efficacy requires, at the very least, a meticulous dissection of the vaccine trial data and methodology, emerging observational data from this country and around the world and analysis of reported vaccine adverse events.

Have the majority of physicians done their due diligence? That is the central question — and it’s one the researchers conspicuously failed to assess in their survey.

The authors also did not point out that the mRNA products deployed several hundred million times upon our population fail to meet the previous definition of “vaccines” — the definition that the overwhelming majority of physicians learned in their meager training on the subject.

In September 2021, the Centers for Disease Control and Prevention (CDC) officially changed the definition of “vaccine.”

Up until then, the CDC defined a vaccine as a “product that stimulates a person’s immune system to produce immunity to a specific disease, protecting the person from that disease.”

The CDC now says a vaccine is a “preparation that is used to stimulate the body’s immune response against diseases.”

Notably, “immunity,” or protection, is now absent from the definition.

With protection no longer a requirement, shouldn’t that temper an informed physician’s opinion about these vaccines’ effectiveness?

In an April 6 meeting of the U.S. Food and Drug Administration’s (FDA) Vaccines and Related Biological Products Advisory Committee, the advisors reached a key consensus: The vaccines’ ability to stimulate the body’s immune response (in the form of antibody levels) were not a correlate of protection.

That being the case, these products barely, if at all, meet the original definition of “vaccine.”

Are the skeptical physicians misinformed? Or are they among the minority who recognize the implications of this crucial rebranding of the term?

There are approximately 1 million physicians in the U.S. Together they comprise only a fraction of our population, but their opinion carries a tremendous amount of weight.

Our pandemic response, in the form of public advisories and vaccine recommendations and mandates, can be implemented only if physicians back them.

Edicts handed down from the CDC and rubber-stamp authorizations from the FDA would be meaningless if they didn’t have doctors’ support.

Thus, their opinions are perhaps the most important gauge of the depth of the pharmaceutical industry’s control over our health and our lives.

The results of Callaghan’s survey are potentially devastating to the CDC’s vaccination campaign and its own credibility.

If we were to extrapolate from the survey’s findings that approximately 10% of physicians believe these products are neither safe nor effective, in the U.S. alone, there would be 100,000 doctors who disagree with the “safe and effective” message.

Moreover, this survey was conducted nearly 11 months ago.

Since then, we have seen:

Based on these developments, we can predict that a similar survey, if conducted today, would demonstrate an even greater level of skepticism.

Perhaps this is why the CDC never conducted its own survey to monitor the effectiveness of its vaccine campaign. If you are afraid of the answer, don’t ask the question.

There is another reason the present level of physician skepticism is likely underestimated: Vaccine-cautionary doctors are under a ruthless attack by their own medical boards and colleagues.

In this article on The Defender, I offered an inside look at the evolving mentality of doctors by sampling their comments on a large, private group on social media over the course of 18 months.

What began as a platform to exchange information quickly became an echo chamber of the “safe and effective” mantra. Skeptics were ridiculed. Medical licenses were threatened simply for voicing dissenting opinions on a private forum.

In this environment, why would a physician voice distrust in our medical authorities — even on an “anonymous” survey?

For these reasons, I believe there is a large-but-silent minority of doctors who believe the COVID vaccines are neither safe nor effective.

There is also the possibility this silent minority is actually a silent majority.

If that proves to be the case, we must carefully consider the implications of what this means and how important it will be to choose the best strategy to undo the damage already done.

An imprudent response may very well lead to more censorship and retribution against doctors who speak up.

Before attacking all doctors who choose to remain silent, it is worthwhile to note these doctors have more at stake than their livelihood.

Once stripped of medical licensure, a doctor has limited pull in the medical community. Revocation of a medical license is a huge stigma and carries with it a loss of credibility among one’s peers.

Those doctors who have been able to retain their credentials while maintaining a vaccine-cautionary perspective may have more sway than those who are relegated to the sidelines.

How can doctors steer their patients away from boosters, or advise parents to decline the primary series for their newly eligible toddlers without a license to practice?

We are at a crucial point in this two-year-long nightmare of scientific deterioration and medical malfeasance.

Reclaiming our health freedom and privacy from an emboldened system of medical authority driven by fear and an immensely powerful pharmaceutical cartel will require more than knee-jerk responses.

We are better served by uniting in the face of a sophisticated campaign specifically designed to divide us.