The World Health Organization on Nov. 13, 2020, granted Emergency Use Listing to a novel oral polio vaccine, developed by the Bill & Melinda Gates Foundation. The vaccine is designed to treat type 2 vaccine-derived poliovirus — the same type of polio identified in the U.K.’s first polio outbreak in 40 years. 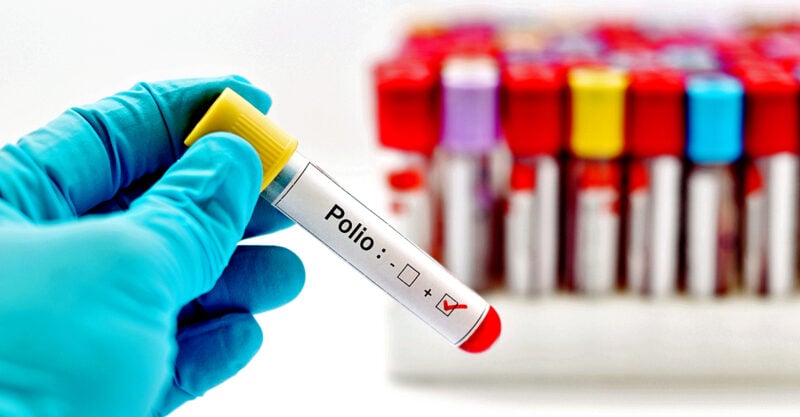 Health officials in the U.K. this month identified the country’s first polio outbreak in 40 years, and believe the outbreak was caused by a strain of polio found in the oral polio vaccine.

Health officials in Britain warned parents on June 22 to ensure their children have been vaccinated against polio after multiple closely related versions of the virus that cause the disease were found in sewage water at the London Beckton Sewage Treatment Works — the largest water treatment plant in the U.K.

“The Global Polio Laboratory Network has confirmed the isolation of type 2 vaccine-derived poliovirus (VDPV2) from environmental samples in London, United Kingdom, which were detected as part of ongoing disease surveillance,” the World Health Organization (WHO) states on its website.

The U.K. Health Security Agency (UKHSA) said it believes the virus was “vaccine-derived,” meaning it came from someone who received the live polio vaccine. That person then passed the virus to individuals in London, who shed the virus into their feces.

The viruses’ genetic sequences suggest “there has been some spread between closely linked individuals in north and east London,” the UKHSA said.

The virus was isolated from environmental samples collected between February and May, and no related cases of paralysis have been detected, the WHO said. “Additional sewage samples collected upstream from the main waste-water treatment plant’s inlet are being analyzed.”

People vaccinated with the live oral polio vaccine (OPV) shed traces of the virus in their stool — which eventually end up in sewage wastewater, NPR reported. Scientists believe a person brought the virus into London and then spread it to others who were unvaccinated.

“We are urgently investigating to better understand the extent of this transmission,” Vanessa Saliba, an epidemiologist who consults for the UKHSA, said in the statement.

The risk to the general public is thought to be “extremely low” but the agency encourages anyone not fully vaccinated to receive a polio vaccine.

WHO approves Gates’ oral polio vaccine for emergency use

The WHO on Nov. 13, 2020, granted Emergency Use Listing (EUL) to a new novel oral polio vaccine called nOPV2, designed to treat the type of polio outbreak occurring in the U.K.

Based on the WHO’s review of data and research available on nOPV2, the Strategic Advisory Group of Experts on Immunization (SAGE) recommended Gates’ nOPV2 become the “vaccine of choice” for responding to type 2 polio outbreaks caused by OPV.

The Bill & Melinda Gates Foundation provided 100% of the funding for the development and clinical trials of the vaccine.

The Global Polio Eradication Initiative (GPEI) states on its website:

“The Bill & Melinda Gates Foundation has funded all development and clinical trials of nOPV2 to date, working closely with GPEI partners throughout the process to ensure resources are going toward a tool that could prove critical to helping end all forms of polio.

“Based on promising data from clinical trials, and the public health emergency that cVDPV2 [vaccine-derived poliovirus type 2] constitutes, the Foundation is funding at-risk production of 160 million doses of nOPV2 to ensure it can be deployed immediately following the issuance of WHO’s interim Emergency Use Listing (EUL) recommendation for use.”

“The emergency use listing, or EUL, is the first of its kind for a vaccine” designed to “pave the way for potential listing of COVID-19 vaccines,” the WHO said on its website.

On December 31, 2020, the WHO issued its first EUL listing for a COVID-19 vaccine. According to the WHO, the agency granted the listing for the Pfizer Comirnaty vaccine.

The EUL is a regulatory pathway that allows the WHO — whose second-largest financial donor is the Gates Foundation — to distribute an unlicensed product for a “Public Health Emergency of International Concern,” which the organization claims polio has been since 2014.

The EUL allows vaccines and medicines to be made available more quickly to address health emergencies, without long-term phase 3 data, and is the same mechanism used for distribution of Zika, Ebola and COVID-19 vaccines.

According to the WHO, in “very rare cases,” the administration of OPV results in vaccine-associated paralytic polio associated with a “reversion of the vaccine strains to the more neurovirulent profile of wild poliovirus.”

In addition to causing vaccine-associated paralytic polio, vaccine strains have the capacity to cause disease of the nervous system and to transmit from person to person resulting in infectious poliomyelitis.

Based on the WHO’s review of data and research available on nOPV2, the Strategic Advisory Group of Experts on Immunization (SAGE) recommended Gates’ nOPV2 become the “vaccine of choice” for responding to type 2 polio outbreaks caused by OPV.

According to the Global Polio Eradication Initiative (GPEI), the nOPV2 was developed to address vaccine-derived poliovirus type 2 outbreaks, which “can emerge when the weakened strain of the vaccine virus circulates in under-immunized populations and, with time, can genetically revert into a form that causes paralysis.”

In other words, “under-immunized” populations — not the OPV — are to blame for the vaccine-related polio strains.

“Once again, Big Pharma, fueled by the Gates Foundation, has created a huge problem that only they can solve. The introduction of the new OPV in the U.K. has predictably led to polio virus in the sewage (i.e., where poliovirus propagates) and now the “only solution” is to inject U.K. citizens with the nPOV2 to prevent the spread of OPV-induced polio. If this isn’t a scam, I don’t know what is!”

The U.K.’s Medicines and Regulatory Health Products Agency (MHRA) on June 17 said in a tweet: “An exciting new global study, co-authored by our lead scientist Javier Martin, shows that new polio vaccine nOPV2 is an effective tool in reducing the risk of Vaccine-Derived Polio Viruses. “

The tweet linked to a study published by the Centers for Disease Control and Prevention (CDC) advocating for the use of Gates’ nOPV2 vaccine.

Between the launch of nOPV2 in March 2021 and late May 2022,  more than 350 million doses had been administered across 18 countries.

The GPEI confirmed, as of May 30, 16 other countries are “ready to use nOPV2” and an additional 17 are in the midst of preparations.

WHO, GPEI and other organizations pushing Gates-funded vaccine

According to UNICEF, the GPEI is a public-private partnership led by national governments with six core partners: Rotary International, the WHO, the CDC, UNICEF, the Gates Foundation and Gavi, the Vaccine Alliance.

The Gates Foundation, in addition to funding the nPOV2 vaccine, GPEI and the WHO, also funds Rotary International, UNICEF, Gavi and the CDC Foundation.

The entity in charge of monitoring vaccine adverse events following administraton of nPOV2  is the WHO’s own Global Advisory Committee on Vaccine Safety (GACVS).

“The GACVS Sub-Committee on nOPV2 Safety will advise WHO and its Member States on safety outcomes following the use of initially pre-licensed type 2 novel oral poliovirus vaccine, during the EUL period, prior to the availability of Phase III clinical trial results,” according to GPEI.

In essence, the Gates Foundation funded the creation, development and clinical trials for the new nPOV2 polio vaccine, funds the organizations that administered millions of doses to be given under EUL without any long-term data, funds the organizations implementing its roll-out and surveillance and funds the entity monitoring adverse events associated with nPOV2’s use.

The Gates Foundation is also a funder of NPR and NPR’s blog, which have published numerous articles on VDPV2 and paved the way for Gates’ nPOV2 vaccine as the solution.

According to the WHO, the original OPV uses a mixture of “live attenuated poliovirus strains of each of the three serotypes,” selected for their ability to mimic the immune system’s response following infection with wild polioviruses, but with a reduced chance of spreading to the central nervous system.

To achieve the desired immune response, three or more doses of OPV are required spaced out over a period of time.

The U.S. and some western countries use an inactivated (killed) polio vaccine (IPV) developed by Dr. Jonas Salk and first used in 1955.

The U.S. stopped using OPV in 2000 because it caused paralytic polio.

According to NPR, countries in Africa, the Middle East and parts of Asia are experiencing a rise in cases of vaccine-derived polio. These countries mostly use the OPV developed by Albert Sabin and first used in 1961.

“The spread of vaccine-derived polio virus from OPV vaccine in multiple countries throughout Africa and Asia resulted in 1,612 cases of paralytic polio from 2017 through 2020,” Dr. Liz Mumper, pediatrician and former medical director of the Autism Research Institute told The Defender.

“Since these polio virus samples are in wastewater in a developed country, those who have access to clean water should not be at risk,” Mumper said. “However, the media is raising alarms. This is a setback for the Global Polio Eradication Initiative.”

According to the CDC, three cases of paralytic polio caused by the OPV vaccine have been reported in the U.S. since the vaccine was discontinued in 2000.