The White House on Monday disputed a reporter’s query comparing unvaccinated undocumented immigrants and an unvaccinated tennis player, after Novak Djokovic announced he is not competing in the US Open, amid travel restrictions that bar foreigners who are not vaccinated against COVID-19 from entering the U.S. 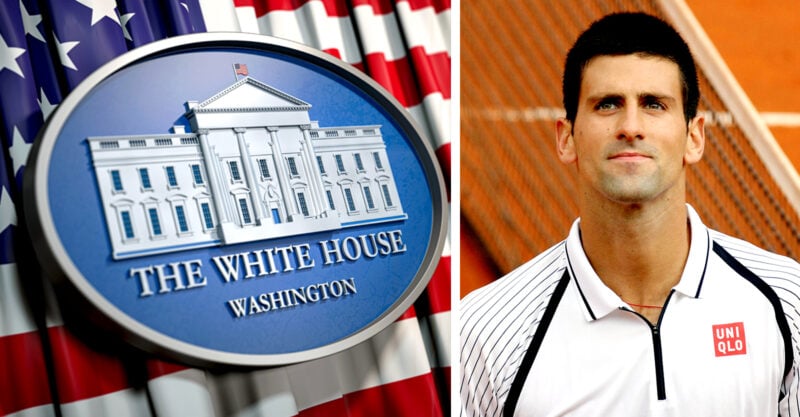 The White House on Monday disputed a reporter’s query comparing unvaccinated undocumented immigrants and an unvaccinated tennis player, after Novak Djokovic recently announced he is not competing in the US Open, amid travel restrictions that bar foreigners who are not vaccinated against COVID-19 from entering the United States.

“How come migrants are allowed to come into this country unvaccinated, but world-class tennis players are not?” White House Press Sec. Karine Jean-Pierre was asked by Fox News correspondent Peter Doocy.

“Which world-class tennis player?” she responded, to which Doocy said “Novak Djokovic.”

Djokovic, a three-time champion at the US Open, said on Twitter on Aug. 25 that he “will not be able to travel to NY this time for US Open,” but will “keep in good shape and positive spirit and wait for an opportunity to compete again.”

Sadly, I will not be able to travel to NY this time for US Open. Thank you #NoleFam for your messages of love and support. ❤️ Good luck to my fellow players! I’ll keep in good shape and positive spirit and wait for an opportunity to compete again. 💪🏼 See you soon tennis world! 👋🏼

Djokovic recently won the 2022 Wimbledon title, making it the seventh time he won the tennis championship. He has pulled out of other tennis competitions in the United States earlier this year due to the Centers for Disease Control and Prevention’s (CDC) COVID-19 vaccine mandate for foreigners.

She added that the vaccination requirement for foreign nationals is a requirement from the CDC. “I defer you to CDC. … this is something that they decide.”

She added that Doocy should reach out to the US Open because they determine their own participant protocols. She suggested that Djokovic’s and undocumented immigrants’ situations are “two different things.”

‘How is it two different things?’

“How is it two different things? Somebody unvaccinated comes over on a plane, you say that’s not okay. Somebody walks into Texas or Arizona unvaccinated, they’re allowed to stay?”

“That’s not how it works. … It’s not like someone walks over,” she said.

“That’s exactly what’s happening,” Doocy interjected. “Thousands of people are walking in a day. Some of them turn themselves over. Some of them are caught. Tens of thousands a week are not. That is what is happening.”

Jean-Pierre responded by reciting a running list of what the Biden administration has done with regard to immigration.

“We have installed new border technology and set up joint protocols with Mexico and Guatemala to catch more human traffickers. We have already made over 3,000 arrests in the first three months of launching an unprecedented anti-smuggling campaign with regional partners,” she said.

Other initiatives included securing “record levels” of funding for the Department of Homeland Security, and installed “dedicated immigration judges” to hear asylum cases faster and expanded labor pathways, including the H-2B visas, according to Jean-Pierre.

“By contrast, core to the prior administration, ​i​mmigration strategy was to build a wall and they couldn’t even come accomplish that in the four years,” she said, dismissing the Trump administration’s policy that “just does not work.”

“It’s not that people are walking across the border, we have a plan in place. This is not like switching the lights on, this is going to take a process. We are fixing a broken system that was actually left by the last administration,” she said.

“As it relates to the tennis star, that is a totally different process, that is the U.S. Open that he is a part of, and there are a CDC federal guidance that he needs to follow.”

“But why is there a CDC requirement for people that fly here as opposed to people that cross the southern border?” Doocy asked.

“But you guys got rid of it because you said the pandemic is not a big deal anymore,” Doocy noted.

The Trump-era Title 42 policy enabled border agents to expel undocumented immigrants back to Mexico immediately if they potentially pose a health risk amid the COVID-19 pandemic.

Since its implementation in March 2020, border agents have been able to turn undocumented immigrants away from the southern U.S. border over 1.9 million times without giving them a chance to seek asylum.

The Biden administration earlier this year announced it would end Title 42, but a judge in May forced the administration to keep the policy in place.

“That is not how it works, Title 42 is very much in place,” Jean-Pierre said to Doocy.

“And that is the process. So there is a CDC provision for folks coming through the southern border. It is not just for tennis players. Migrants have also a CDC guidance that we have to follow which is Title 42. So that is not the case, that is factually wrong.”

Since taking office, President Joe Biden reversed a number of immigration and border policies from the Trump administration, including pausing and ultimately suspending border wall construction; stopping President Donald Trump’s “Remain in Mexico” order for arrivals before Jan. 1; and pulling back on using Title 42 emergency powers amid the COVID-19 pandemic by exempting undocumented immigrant children and many family units from being expelled under the policy.

In the 18 months since Biden took office, nearly 5 million undocumented immigrants have crossed U.S. borders, according to the Federation for American Immigration Reform (FAIR) in a statement on Aug. 16.

“Roughly the equivalent of the entire population of Ireland has illegally entered the United States in the 18 months President Biden has been in office, with many being released into American communities,” FAIR President Dan Stein said in the statement.

Customs and Border Protection have said migrant encounters have topped 2 million this fiscal year — a record. Amid the immigration crisis, a number of Texas counties have declared the situation an “invasion.” Officials also cited drugs, including fentanyl, being brought across the border.

Mimi Nguyen Ly covers world news with a focus on U.S. news for The Epoch Times.

Rita Li and Zachary Stieber contributed to this report.