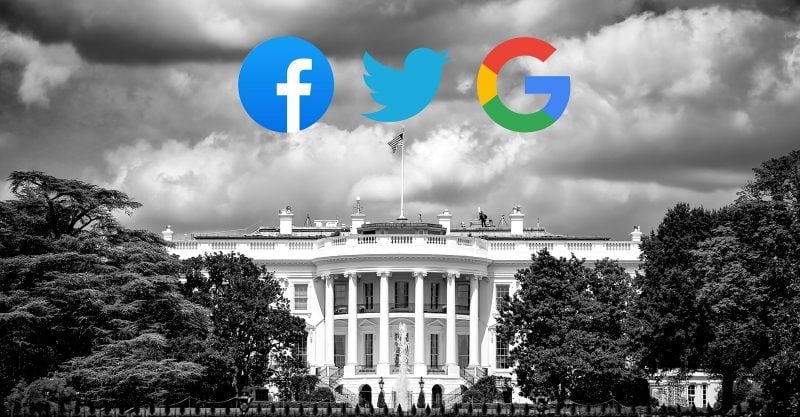 The White House is asking Big Tech giants Facebook, Twitter and Alphabet Inc.’s Google to “clamp down on chatter that deviates from officially distributed COVID-19 information,” according to the New York Post and other news reports.

“Vaccine hesitancy is a huge obstacle to getting everyone vaccinated and there are no larger players in that than the social media platforms,” a White House source told Reuters late last week.

Biden’s Chief of Staff Ron Klain had previously said information questioning the COVID vaccine has caused others to question the vaccine. But the news out of Washington last week was the first sign that officials are directly engaged with Silicon Valley in censoring social media users, according to Reuters.

The Biden administration wants to make sure that unfavorable material does not start trending on social media or become an even broader movement, citing concerns over a recent anti-vaccine protest at Los Angeles Dodgers Stadium which was organized through a Facebook page.

“We are talking to [social media companies] … so they understand the importance of misinformation and disinformation and how they can get rid of it quickly,” a White House source explained.

Sen. Richard Blumenthal (D-Conn.) last week criticized social media companies in a tweet accusing Facebook and Twitter of moving too slowly in responding to targeted harassment of people getting vaccinated and what Blumenthal described as “dangerous conspiracy theories.”

A spokesperson for Facebook told Reuters the company has reached out to the White House to offer any assistance they can provide and recently announced a new policy to remove COVID information the company deems false, along with pages, groups and accounts that repeatedly spread such material.

Twitter stated the company is in “regular communication with the White House on a number of critical issues including COVID-19 misinformation.”

Google did not comment on engagement with the White House but did point to a company blog on how it stops the spread of misinformation.

The complaint alleges that Facebook has insidious conflicts with the pharmaceutical industry and health agencies and raised detailed factual allegations regarding the CDC, CDC Foundation, and WHO’s extensive relationships and collaborations with Facebook and Zuckerberg calling into question Facebook’s joint action in a censorship campaign with the government.

Earlier this month, Kennedy’s Instagram account was deplatformed without advance notice for what the media claimed were “false COVID claims” or “vaccine misinformation.” Some reports falsely characterized Kennedy as an “anti-vaxxer.”

Kennedy unequivocally rejects those characterizations. He wrote in response to Instagram’s censorship:

“Every statement I put on Instagram was sourced from a government database, from peer-reviewed publications and from carefully confirmed news stories. None of my posts were false. Facebook, the pharmaceutical industry and its captive regulators use the term ‘vaccine misinformation’ as a euphemism for any factual assertion that departs from official pronouncements about vaccine health and safety, whether true or not. This kind of censorship is counterproductive if our objective is a safe and effective vaccine supply.”

As Kennedy has stated numerous times, “for a democracy to function, civil debate of issues — including vaccine science — must be allowed. Censorship of that debate is anathema to democracy.”

Many reports have raised serious questions about the safety of COVID vaccines, including adverse reactions and other possible long-term complications that deserve debate, Kennedy said.

The Defender reported in January that a Florida doctor died three days after receiving Pfizer’s COVID vaccine. An expert on blood disorders at Johns Hopkins said in an interview with The New York Times, “I think it is a medical certainty that the vaccine was related.”Earlier this month, the CDC announced it was investigating the death of a 36-year-old doctor in Tennessee who died from an extremely rare multisystem inflammatory syndrome one month after getting his second dose of a COVID vaccination.

According to new data released Friday, as of Feb. 12, 15,923 adverse reactions to COVID vaccines, including 929 deaths, have been reported to the CDC’s Vaccine Adverse Event Reporting System since Dec. 14, 2020. One-third of reported deaths occurred within 48 hours of receiving the COVID vaccine.

“While social media companies are private entities with rights to censor information they don’t like, the involvement of the government in censorship efforts implicates the First Amendment,” Kennedy said.