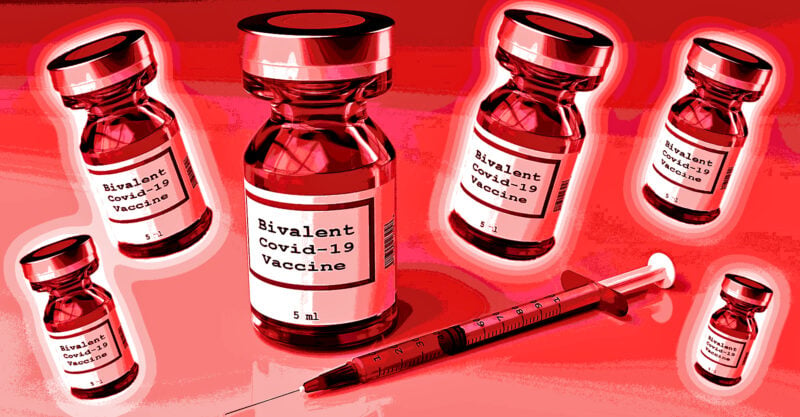 The Centers for Disease Control and Prevention (CDC) today released new data showing a total of 1,418,220 reports of adverse events following COVID-19 vaccines were submitted between Dec. 14, 2020, and Sept. 16, 2022, to the Vaccine Adverse Event Reporting System (VAERS). That’s an increase of 10,811 adverse events over the previous week.

The data included a total of 31,074 reports of deaths — an increase of 139 over the previous week — and 258,480 serious injuries, including deaths, during the same time period —  up 1,253 compared with the previous week.

There were a total of 563 reports of adverse events following the new bivalent booster COVID-19 vaccine as of Sept. 16, 2022. The data included a total of 5 deaths and 31 serious injuries. 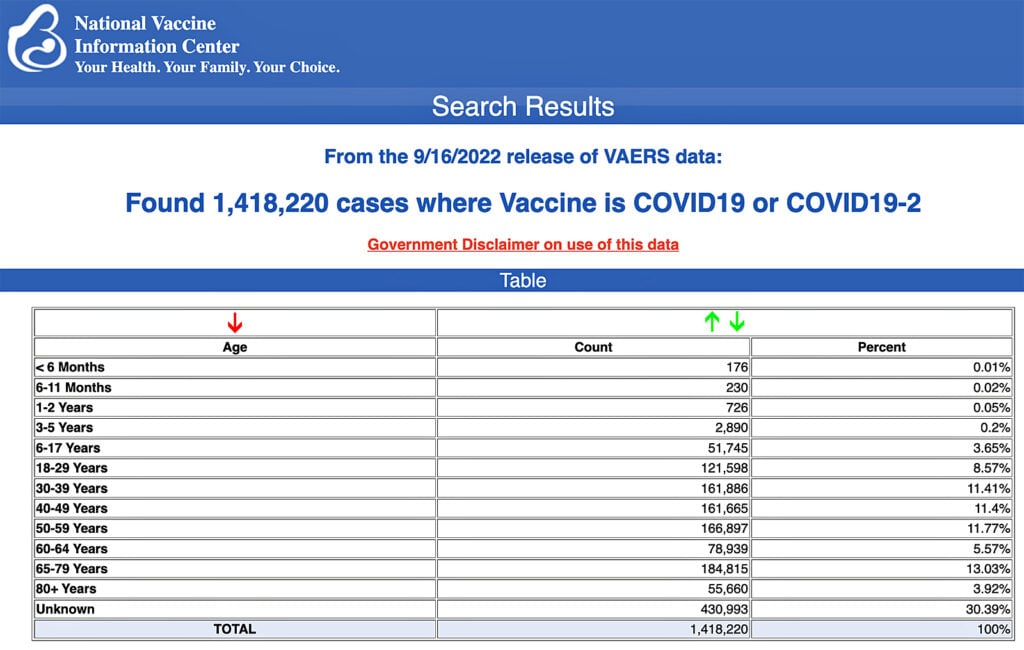 A Canadian woman on Sept. 14 died suddenly in a drug store within minutes of receiving the new bivalent COVID-19 booster shot, according to her daughter.

Carol Pearce texted her daughter, Stephanie Foster, at 12:31 p.m. to say she received her booster shot and was waiting the recommended 15 minutes at the drug store. At 12:38 p.m., Pearce was unconscious.

An eyewitness told SASKTODAY.ca she was in the store when she heard screaming and crying. “They were saying in the store that it was about seven minutes,” after Pearce got the booster shot that she collapsed on the floor, the witness said.

“The Saskatchewan coroner’s service has investigated this instance and determined that the person died from natural causes,” Dale Hunter, a communications consultant from the Saskatchewan Ministry of Health said in an email.

“I do not believe this was caused from natural causes,” Foster said. “My Mom had no health conditions. I believe had she not gotten that Covid shot then she would be here with us today!”

The family said when Pearce left for her appointment, she was happy and healthy.

The CDC expects new bivalent COVID-19 boosters to be ready for kids ages 5 to 11 by mid-October, Reuters reported.

The agency said in a document released Tuesday it will issue a recommendation in early- to mid-October if the FDA authorizes the modified booster for this age group.

The bivalent booster targets both the original Wuhan strain no longer in circulation and the Omicron BA.4/BA.5 subvariants. The CDC expects pre-orders of the Pfizer booster to begin next week even though the FDA has not yet signed off on the vaccine for this age group.

Moderna’s booster is the same formula used for children and adults and will not require a separate pre-order period, the agency said.

A healthy 35-year-old woman who experienced a seizure two days after her second dose of Moderna’s COVID-19 vaccine was diagnosed with limbic encephalitis, a rare form of brain inflammation.

The authors of the report said the vaccine caused the woman’s condition.

According to the case report, when the woman arrived at the hospital she had a fever, followed by generalized tonic-clonic seizures that lasted for approximately five minutes and a postictal (post-seizure) phase of confusion that lasted approximately 30 minutes.

While in the ER, she had two more generalized seizures and was stable. Upon admission to the hospital, a lumbar puncture was performed revealing significant lymphocytosis.

She then developed anisocoria, a condition in which the pupil of one eye differs in size from the pupil of the other eye. An urgent CT scan of the head showed possible temporal lobe hypodensities (darker areas on the CT scan). A head MRI showed features suggestive of limbic encephalitis. A subsequent electroencephalogram showed severe post-seizure encephalitic changes.

Researchers concluded the patient’s limbic encephalitis — which occurred quickly after COVID-19 vaccination — is an uncommon side effect of the vaccine based on the timing of symptoms and absence of other identifiable causes.

Supreme Court Justice Clarence Thomas granted the request by the detective, Anthony Marciano, after Justice Sonia Sotomayor initially rejected it. Marciano’s challenge seeks to strike down the mandate for all city workers — including firefighters, police and teachers.

According to data from the mayor’s office, as of Aug. 30, 1,761 city workers have been fired for not getting the vaccine. That number is likely higher after the New York City Department of Education this month fired another 850 teachers and other staff, bringing the total to nearly 2,000 school employees fired for failure to comply with the mandate, according to the New York Post.

According to Nagy, “about a week-and-a-half later, Marilyn experienced an episode of hallucinations, seeing people outside who were not there.”

“Marilyn’s family attributed [the episode] to her dementia, even though she had not had any prior episodes … [They] did not make a connection to the vaccination.”

But the family’s opinion changed a few weeks later, after Marilyn got her second Pfizer shot and “had a more dramatic reaction,” experiencing “another episode of hallucinations that same day, extreme weakness and pain in her leg,” Nagy said.

Marilyn seemed to recover, but over the coming weeks, she continued to experience occasional hallucinations, and an increased decline in her cognition, Nagy said, prompting a visit to a neurologist.

An MRI “revealed she was experiencing blood clots, bleeding and mini-strokes in her brain, and she was sent directly to the ER for observation and treatment,” Nagy said.

At the hospital, Marilyn was administered blood-thinning medications and appointments were scheduled “with several specialists.”

About a month later, she developed deep vein thrombosis in her left leg, which according to Nagy, was “the same leg that had been experiencing pain since her second vaccine.”

Biden says ‘pandemic is over’ but mandates, federal health emergency remain in effect

President Joe Biden’s Sept. 18 statement that the COVID-19 pandemic is “over” prompted questions about why his administration hasn’t ended the federal public health emergency and how the government or employers can continue to mandate Emergency Use Authorized vaccines.

In an interview aired Sunday on “60 Minutes,” President Joe Biden declared the COVID-19 “pandemic is over,” in the first such statement by a prominent political figure in the U.S. Biden made the comment from the North American International Auto Show in Detroit, which was held for the first time since 2019.

In his remarks, Biden, using the auto show as a point of reference, stated:

“We still have a problem with COVID. We’re still doing a lotta work on it … but the pandemic is over.

“If you notice, no one’s wearing masks. Everybody seems to be in pretty good shape. And so I think it’s changing. And I think this is a perfect example of it.”

Sarah Lovenheim, a spokesperson for the U.S. Department of Health and Human Services (HHS), said the federal public health emergency “remains in effect” and that a 60-day notice would be provided by the agency before it is rescinded.

The earliest possible date when the emergency declaration would be lifted is in late November — well past the current Oct. 15 expiration date.

When her employer in 2021 mandated all employees get the COVID-19 vaccine, Heather Elkins, who had a pre-existing heart condition, requested a medical exemption.

But the Oregon Department of Human Services turned down her application — even though Elkins had transitioned, in 2020, to a permanent work-from-home employee.

Elkins, 45, told The Defender she was reluctant to get the vaccine in part because of the lack of long-term safety data but also because she saw reports of people developing heart issues.

Elkins got the Pfizer vaccine on Sept. 12, 2021, and “within about an hour,” she said, began experiencing adverse reactions.

The reactions she experienced after the first shot didn’t qualify her for a medical exemption from the second shot, she said.

So despite continued efforts to secure a medical exemption, Elkins received her second Pfizer shot on Oct. 3, 2021, and experienced “the same severe reaction as with the first dose.”

A year later, Elkins continues to experience symptoms that affect her ability to work.

“To date, I’m experiencing all the same issues in addition to other symptoms like brain fog, horrible joint pain, pins and needles sensations, painful nerve zaps, shakiness and tremors in my hands and feet, and vision issues.

“I’ve now been mostly confined to my bed for the last 11 months, unable to do minimal activities because of my debilitating symptoms.”