The U.S. Supreme Court on Oct. 7 will consider a New York Police Department detective’s challenge to the city’s COVID-19 vaccine mandate for municipal employees. The decision came one day after New York Mayor Eric Adams said the city will drop the mandate for private employers, but not city workers. 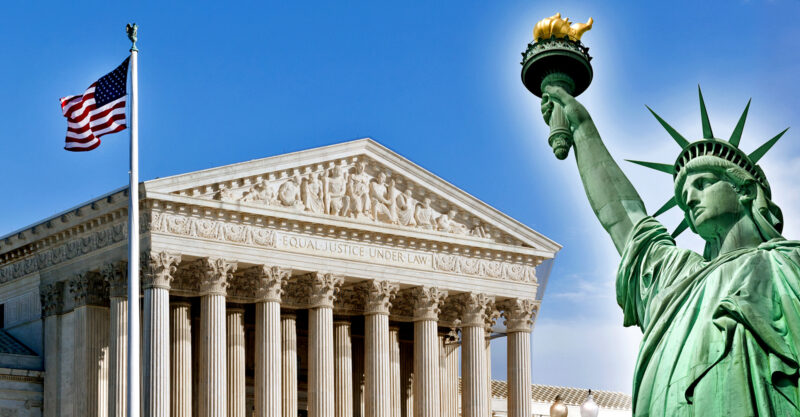 Marciano’s challenge seeks to strike down the mandate for the Emergency Use Authorized COVID-19 vaccine for all city workers — including firefighters, police and teachers.

According to data from the mayor’s office, as of Aug. 30, 1,761 city workers have been fired for not getting the vaccine, Daily News reported Wednesday.

That number now is likely higher after the New York City Department of Education this month fired another 850 teachers and other staff, bringing the total to nearly 2,000 school employees fired for failure to comply with the mandate, according to the New York Post.

Marciano’s attorney, Patrica Finn, general counsel to the group Make Americans Free Again, on Wednesday tweeted that she resubmitted the request directly to Justice Thomas in a deliberate effort to circumvent Sotomayor’s dismissal.

According to Finn, the case is simple: state and federal laws prohibit the imposition of vaccine mandates without the recipient’s informed consent. Because Marciano did not consent to the vaccine, his due process rights are being violated.

Lawsuits against the city’s mandate for city workers so far have failed, and Fabien Levy — Adams’ spokesperson — said the administration is confident the Supreme Court will side with the decision to maintain the municipal mandate, first implemented in November 2021 by former Mayor Bill de Blasio.

“The Supreme Court has rejected numerous attempts to have it take up lawsuits on the vaccine mandate and a number of other courts have upheld the mandate, recognizing that it saves lives and is a condition of employment,” Levy said.

That may soon change, Finn said.

“It is a legal question, and facts are not in dispute,” she said. “I think the court has been waiting for a case like [Marciano’s]. I think they are waiting for somebody to approach the issue in a very clean and straightforward way.”

Finn and Marciano’s case has the advantage of following a recent precedent-setting case in which a Manhattan judge ruled New York City police officer Alexander Deletto, 43, should be allowed to keep his job, the New York Post reported on Sept. 14.

Manhattan Supreme Court Justice Arlene Bluth noted in the ruling that the city had given the Brooklyn police officer no explanation for why it had rejected his religious exemption application.

Adams on Monday said the vaccine mandate for private employers and student athletes will end on Nov. 1.

When asked during a Tuesday press conference how he justified not lifting the mandate for city employees, he said, “That is not on the radar for us.”

But it is on the radar of others, including Patrick Lynch, president of the Police Benevolent Association, a union for officers. In a statement, Lynch said:

“This announcement is more proof that the vaccine mandate for New York City police officers is arbitrary, capricious, and fundamentally irrational ….

“Now that the city has abandoned any pretense of a public health justification for vaccine mandates, we expect it to settle our pending lawsuits and reinstate with back pay our members who unjustly lost their jobs.”

“With New York City’s COVID-19 vaccine mandate for private-sector workers coming to an end on Nov. 1, it is time for either the mayor or the Supreme Court, to end the city’s discriminatory practice.”

Adams’ administration faces growing criticism for its inconsistent stance on the mandate for municipal employees, especially in light of the Biden administration’s Aug. 31 announcement that it will not enforce its Executive Order 14042, which mandated the COVID-19 vaccines for federal contractors and President Biden’s declaration last week that “The pandemic is over.”

The Centers for Disease Control and Prevention last month reversed its COVID-19 guidance, rescinding its previous distinctions between the vaccinated and unvaccinated.

Teachers for Choice on Sept. 14 won their battle to consolidate three lawsuits challenging the vaccine mandate for New York City teachers into a single case.

John Bursch of Alliance Defending Freedom — the new lead attorney — will argue the case in front of the 2nd U.S. Circuit Court of Appeals. Oral arguments are likely to take place within a few weeks, said Sujata Gibson, another attorney handling the case.

“Gibson feels very confident in the case we have, especially with all the cases consolidated into one challenging virtually all of the remaining vaccine mandates in New York City,” said plaintiff Michael Kane.

According to the Department of Education website, the district is one of the largest in the U.S., serving more than 1 million students.

Teachers aren’t the only ones fighting back. In February, workers marched from Metro Tech in Downtown Brooklyn, over the Brooklyn Bridge, and then made their way to City Hall to rally against the then-pending Feb. 11 deadline that would mean termination for many who declined vaccination.

Bravest for Choice, a group that helped organize the protest, raises money to support the city’s firefighters, medics and/or EMTs who have lost their income after not complying with the vaccine mandates.

“The Firefighters, Medics and EMTs who have been serving New York City throughout the entire pandemic are being sent home due an unjust, unnecessary mandate.

“These men and women want to work. They want to keep serving the public. They simply can not comply with the mandate due to religious, medical or personal reasons. … Just let them work.”