“Under the Skin,” a new documentary by science journalist Bert Ehgartner, explores research into the aluminum compounds used in vaccines, including a new “extra-strong” aluminum compound used in Merck’s Gardasil vaccine for human papillomavirus. 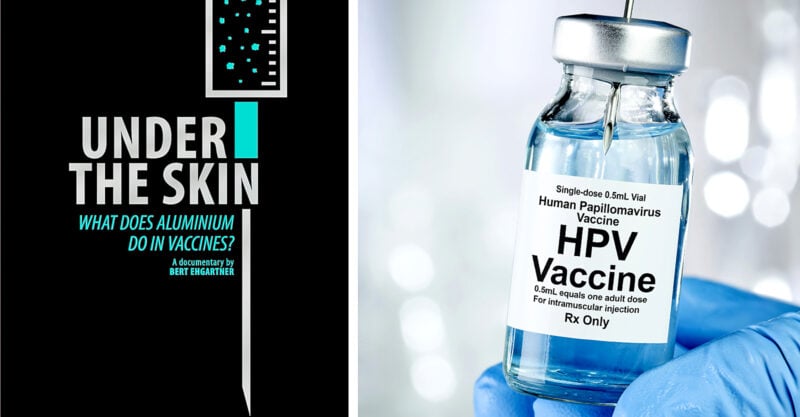 A new documentary reveals how Merck’s Gardasil, marketed as a vaccine to prevent cervical cancer, became a global blockbuster through an aggressive marketing campaign, despite rare — but serious — side effects that left girls injured and struggling for answers.

Low-risk HPVs rarely cause disease, while high-risk HPVs can cause several types of cancer, including cervical cancer.

The relationship between aluminum and side effects experienced by thousands of girls after receiving the HPV vaccine was ignored until a team of Danish doctors collected dozens of cases and sent a safety warning to the European Medicines Agency (EMA).

According to The BMJ, documentation from the Danish Medicines Agency shows discrepancies in trial documents of two Gardasil prelicensure clinical trials, one in 2002,  and one in 2003.

For both trials, the EMA appears to have authorized potassium aluminum sulfate as the adjuvant and not AAHS.

The EMA said AAHS was introduced without any prelicensure safety evaluation. However, the EMA and World Health Organization concluded “high vaccine safety and efficacy.”

Merck describes Gardasil’s AAHS adjuvant as physically and functionally distinct from all other previously used aluminum adjuvants. However, according to The BMJ, “There is a need for rigorous evaluation of the benefits and harms of the adjuvant AAHS.”

“​​Vaccine manufacturers are in a dilemma because it would cost hundreds of millions to test novel — less problematic — adjuvants. Therefore, they simply do nothing. And the drug authorities — which are financed to a large extent by the vaccine manufacturers — so far see no need to do so.”

“About two-thirds of all vaccinations contain aluminum,” Ehgartner said. “Babies today receive about twice as many vaccinations as they did in the 1980s. As a result, exposure to aluminum-containing adjuvants is also on the rise.”

Ehgartner said numerous indications show aluminum agents cause lasting damage to the immune system of many vaccinated children and adults, and can lead to permanent diseases.

“Almost all modern diseases — such as allergies, autoimmune diseases, developmental disorders or immune-related tumors — are connected with a hyper-aggressive immune system,” Ehgartner said. “In the film, we show that these additives have never been tested for safety.”

According to the documentary, the first vaccination against HPV was approved in 2006 and targeted two strains of the virus that causes cervical cancer.

Merck’s international advertising campaign played on parents’ emotions to convince them to vaccinate their children and teens, the documentary alleges.

The film features Dr. Jesper Mehlsen, physician and department head of the Klinik Mehlsen in Frederiksberg, Denmark. He is one of the only doctors in the world treating women injured by the HPV vaccine.

In 2011, Mehlsen saw his first few patients who developed strange symptoms, including fainting, increased heart rates and others, after receiving the HPV vaccine.

By 2015, Mehlsen and his team had roughly 800 patients who were referred for possible side effects from the HPV vaccine — as he and his team “had been extensively studying this.”

Mehlsen said the clinic had to establish a special center for complaints after the HPV vaccination to handle the “large rush of complaints” associated with the vaccine.

Some patients saw 15 different doctors over the course of the year in their search for answers, and we “have had contacts with doctors in other countries who have seen the same thing,” Mehlsen said.

As part of his research, Mehlsen compared women who received the HPV vaccine and experienced adverse events with women who were vaccinated and didn’t.

He discovered three types of “dangerous” autoantibodies in women who experienced side effects of the HPV vaccine that he believes were triggered by aluminum compounds.

An autoantibody is an antibody produced by the immune system that is directed against the individual’s own proteins. Autoantibodies damage body tissues and interfere with the normal functioning of cells. Many autoimmune diseases are caused by autoantibodies.

Mehlsen presented his findings in 2019, in Chicago, but did not secure the funding or support he needed to carry out his research.

‘I couldn’t just go home and be a normal kid’

The documentary profiles several young girls, including Elizabeth, whose symptoms started after her second dose of the HPV vaccine.

According to her mother, Hanne, Elizabeth had been in bed for three years at the time the documentary was filmed.

Elizabeth can’t stand for long and her whole body hurts all the time, Hanne said. “It’s very sad to see your healthy daughter being almost an invalid.”

Paula, another girl featured in the film, was paralyzed after receiving the HPV vaccine. Doctors discovered that the HPV vaccine had damaged the myelin sheath of her spine within three hours of being vaccinated when an autoimmune reaction caused her body to attack its own cells.

Marika’s symptoms started in 2009, after her first dose. She experienced headaches and fevers and couldn’t stand up without feeling very sick.

Marika was bedridden for a few weeks but then she recovered. She experienced the same side effects after her second dose and again recovered.

But after her third dose of the HPV vaccine, Marika’s symptoms didn’t go away.

“My parents took me to a lot of doctors all around the area of Copenhagen,” Marika said.

“They did a lot of scans of my back, blood work, lung function tests and my heart. Everyone said I wasn’t sick and there was nothing wrong with me. They told me to go home, but it was hard because I couldn’t just go home and be a normal kid.”

Mehlsen, who specializes in the autonomic nervous system, discovered Marika’s injury through a series of tests, including a tilt test. In a certain position, Marika’s blood pressure would oscillate and her heart rate would increase in a way she could not control.

According to the documentary, the EMA does not share this view and claims the symptoms experienced by these girls — and thousands of others like them — are “in no way related to the vaccination.”

A 40-page report by the EMA dismissed the concerns of Danish doctors, concluding there is no reason to recommend a change to the way the HPV vaccines are used.

But, Mehlsen said, “Most of these people have never seen the patients.”

How aluminum compounds in the HPV vaccine cause injury

Almost all modern diseases have their root in a disturbed immune system, according to the documentary, which suggests aluminum adjuvants in vaccines are one explanation for the adverse events reported after vaccinations like the HPV vaccine.

“Aluminum adjuvants are cause for concern,” according to the documentary. Non-live vaccines need adjuvants. The vaccines contain more than 1,000 times more aluminum than antigens, but if you didn’t have aluminum nothing would happen.

The documentary explained how aluminum compounds function in vaccines, and how they are used to incite an immune response.

After injection, aluminum ions immediately begin to dissolve and start attacking the surrounding cells. This triggers an inflammatory response and the aluminum ions kill cells. As the cells die, they release chemical messengers that “call for help.”

White blood cells immediately respond to the alarm and a fierce battle takes place at the vaccination site.

Aluminum salt works very well as an adjuvant, according to the documentary. It also costs nothing to use in a vaccine, and there are no regulations regarding the use of aluminum in vaccines — so it can be used without worrying about whether or not it’s safe.

Physicians and scientists explained how the particles of aluminum contained in the HPV vaccine are not nanoparticles, and how they’re capable of causing autoimmune reactions like those experienced by the girls.

The documentary follows a Spanish scientist who conducted an experiment comparing sheep injected with a vaccine, aluminum compound or placebo.

The sheep that received the vaccine and aluminum compound displayed abnormal behaviors. For example, they removed the wool from other sheep, gnawed on metal fences, didn’t run away from humans, appeared stressed, frustrated and disoriented and lost weight. Many of them died.

The sheep that received the placebo acted normally.

“Aluminum compounds have been used for years, but have never been tested using modern methods — and now a potentially even more toxic aluminum compound is being used in the HPV vaccine,” according to the documentary.

“In ‘Under The Skin’ you are left in no doubt as to how the vaccine has ruined lives of young girls and their families,” said biologist Dr. Christopher Exley in a Substack post. “It can be a harrowing watch. He [Ehgartner] also documents the difficulties encountered by the doctors and scientists that are trying to address the health issues.”

“Science is presented simply and factually with reference to peer-reviewed literature and the personal experiences and opinions of those involved. Bert offers up a level playing field giving opportunities to the pharmaceutical industry and regulatory agencies to have their say. The viewer is left to decide on which side of the discussion integrity lies.”

“It is high time to make ignorant health policy and drug authorities aware of their responsibility. Many vaccines are manufactured today in much the same way as they were 100 years ago. But our lifestyles are no longer comparable. Some germs and diseases have also changed. Every vaccination must be evaluated for its benefits and harms — and withdrawn from the market if the risk outweighs the benefits.

“If we continue as we are, future generations will get sicker and sicker, and soon half the population will suffer from serious chronic diseases. We need to address the abuses and end the corruption in drug regulatory agencies. Vaccination has become a kind of religious community through uncritical worship.”

We must “return it to the status of normal science — where criticism is also allowed and even desired,” Ehgartner said. “If this succeeds, it is quite possible that we will experience a medical miracle — and diseases for which we know neither cause nor cure so far — will be massively reduced or even die out.”