The Truth About HPV Vaccination, Part 3: Can It Prevent Cervical Cancer?

There are no valid studies showing the vaccine for the human papillomavirus, or HPV, prevents cervical cancer. However, there are studies suggesting the vaccine could increase the risk of cancer. 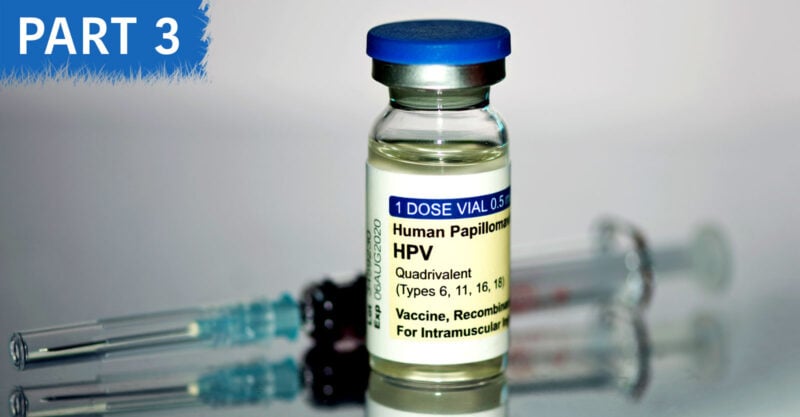 Editor’s Note: This third installment in a multi-part series about the human papillomavirus, or HPV, vaccine examines studies that link the vaccines to increased risk of serious neurological and autoimmune disorders. Read Part 1 here and Part 2 here.

In part 1 and part 2 of this series, we discussed the human papillomavirus (HPV) vaccine and its links to ovarian insufficiency and autoimmune disease.

In part 3, we turn to questions regarding the effectiveness of the vaccine to prevent cervical cancer, and the limitations of relevant clinical trials to detect such a type of effect.

Typically, there is a long period from HPV infection to cervical epithelium abnormalities, then cervical cancer.

HPV infections usually last 12–18 months and are eventually cleared by the immune system.

Fewer than 10% of HPV infections are persistent.

There are two types of precancerous cervical lesions, low-grade or high-grade. Low-grade cervical neoplasia grade 1 (CIN1) is usually transient and resolves naturally within one to two years.

Only a few persistent infections progress to the clinically meaningful high-grade, CIN2 or 3. Meanwhile, the median time from CIN2/3 to transition to cancer is estimated to be 23.5 years.

Among those with weakened immune systems, HPV-related cancer might progress more quickly.

In a review of the natural history of HPV infection, the complex pathway from infection to cancer is elucidated, including what is known (purple boxes) and where uncertainty remains (blue boxes).

Because of the long lead time from HPV infection to cervical cancer, a prospective, randomized controlled trial is not easily designed and feasibly implemented.

Lack of long-term follow-up is a common issue for most clinical trials to prove the HPV vaccine’s effectiveness in preventing cervical cancer.

For example, a 2007 study found that Gardasil was effective in reducing HPV-associated cervical precancerous lesions rate by 20%.

This study followed their subjects for only an average of three years after administration of the first dose.

Furthermore, due to the complex uncertainties in the natural history between HPV infection and cervical cancer, it is not easy to claim the effectiveness of the HPV vaccine.

A randomized trial is designed to balance the two groups — vaccine and placebo — so that any unmeasured confounding variables which might influence the outcome of the trial are distributed evenly.

However, if the treatment group knows they got the vaccine, might their behaviors change? Might they be less risk-averse, thinking they have some protection?

For example, girls might think they are vaccinated and “protected” from cervical cancer and may tend to initiate sexual intercourse at a younger age or engage in sexual activities with more partners.

However, sexual intercourse at a young age, multiple sexual partners and oral contraceptive use are associated with an increased risk of cervical cancer in women.

In other words, HPV vaccination may offer some protection if offered before sexual activity is initiated, but it may also be associated with increased behavioral risk factors.

Whether the benefits of vaccination outweigh any risks is therefore a multifactorial question deserving of careful longitudinal study.

In 2020, a Queen Mary University study led by Dr. Claire Rees reviewed 12 randomized clinical trials for Cervarix and Gardasil. The investigators found that the trials did not include populations representative of the vaccination target groups, and the trial design may have overstated vaccine efficacy.

For example, one trial design generated evidence that the vaccine prevents CIN1. But this is not meaningful because these lesions usually resolve on their own.

Furthermore, the study accessed efficacy against low-grade precancerous lesions. But this is not necessarily suggestive of efficacy against the more serious but much less frequent high-grade lesions.

Finally, the cytology screenings were done every six to 12 months instead of every 36 months (normal screening interval), meaning the efficacy of the vaccine may have been overestimated, as low-grade lesions could go away spontaneously.

All this is to say the HPV vaccine may be effective at preventing more serious lesions which lead to cervical cancer, but it is hard to know because of these poorly designed trials.

Nothing is conclusive without a larger trial powered to detect a difference in rates of more serious cervical changes according to the typical screening schedule. However, such a trial has not yet been performed.

A nationwide Swedish health registry-based study followed 1,672,983 women for 12 years to assess the association between HPV vaccination and the risk of cervical cancer.

Even though the results are positive, the study researchers raised a few concerns themselves.

Third, lifestyle and health factors such as smoking, sexual intercourse at a young age, multiple sexual partners, oral contraceptive use and obesity are reportedly associated with the risk of cervical cancer.

These factors have not been thoroughly analyzed by this study and could have contributed to the data.

Furthermore, parental education level and annual household income level may be interconnected with lifestyle factors such as smoking status.

Strengths of this study include its size, duration and outcome of interest being invasive cancer, not low-grade lesions. However, it is impossible to exclude the relationship between lifestyle factors, vaccination uptake and cervical cancer.

Only a randomized controlled trial (RCT) could balance the two groups on these unmeasured — but related — risk factors.

However even if the risk factors (sexual behaviors) are fully balanced at baseline with an RCT, it is hard to keep them still balanced during the whole study course after HPV vaccination.

No association found in a U.S. database

Meanwhile, researchers found no association between vaccination and cancer mortality in the U.S.

According to the National Cancer Institute’s SEER program, the incidence of deaths from cervical cancer before Gardasil’s introduction in the U.S. had been steadily declining for years and, in 2006, was 2.4 per 100,000 women.

In a cross-sectional study using a nationally representative sample of U.S. adults aged 20–59 years, among 9,891 participants, the researchers did not find an association between HPV vaccination and HPV-related cancers.

In Australia, government data similarly reveal an increase in cervical cancer rates in certain age groups of women following the implementation of the Gardasil vaccine.

Even though the rates decreased in other age groups, the abnormal increase in the 30–34 age group needs an explanation. 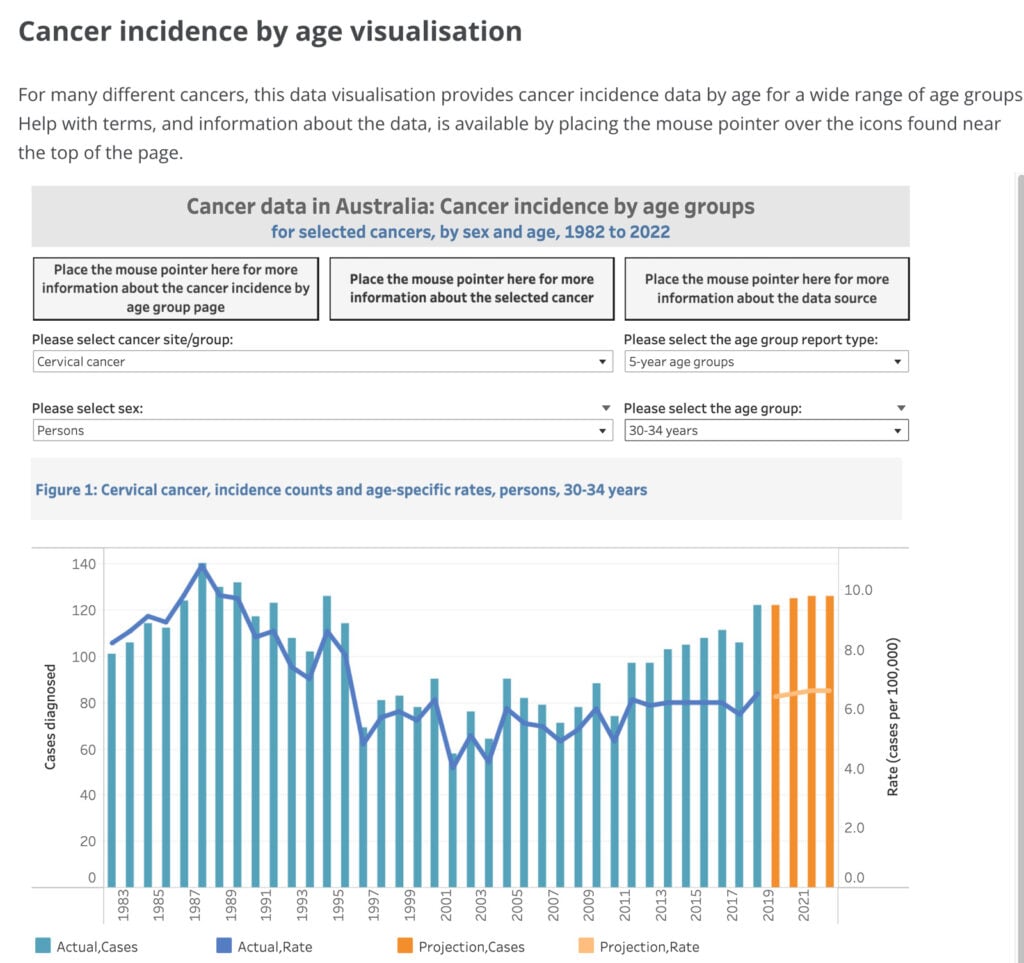 Several factors should be considered.

First, this database does not tell the stage of cancer. More cancer diagnosed at an early stage may result in a cancer-rate increase.

Second, decreasing cancer rates could be caused by declines in screening rates, perhaps due to the pandemic and/or a reluctance to get tested.

Third, Australia has an increasing proportion of immigrants from South Asia, and these cultural factors may influence the cervical cancer-screening rate.

A study of South Asian women living in Australia found that almost half had never had a previous screening test.

Cervical cancer rates rise after HPV vaccination in the UK

While the author would consider it to be too early to draw conclusions regarding vaccine efficacy in protecting against cancer, this merits further study.

Accordingly, an analysis was conducted in the U.K. in 2018 in response to public interest regarding this increase in cervical cancer.

Researchers from Queen Mary University and King’s College London found that it was attributable to an increase in the proportion of women first screened at age 24.5 years.

The increase was limited to stage I cervical cancer. But there was no evidence of a lack of screening leading to increasing rates.

While the researchers considered it too early to conclude vaccine efficacy in protecting against cancer, these findings merit further study.

Besides the vaccine’s unclear effectiveness in cancer prevention, studies further suggest the suppression of the HPV strains targeted by the vaccine may induce more virulent strains.

For example, a 2015 study found that vaccinated young adult women had a higher prevalence of high-risk HPV types other than types 16 and 18, putting them at risk for more aggressive cervical and other HPV-related cancers.

Reprinted with permission from The Epoch Times. Dr. Yuhong Dong, a medical doctor who also holds a doctorate in infectious diseases in China, is the chief scientific officer and co-founder of a Swiss biotech company and former senior medical scientific expert for antiviral drug development at Novartis Pharma in Switzerland.

If you or your child suffered harm after receiving the Gardasil HPV vaccine, you may have a legal claim. Please visit Wisner Baum for a free case evaluation. Click here to watch a Gardasil litigation update interview with Wisner Baum Senior Partner Bijan Esfandiari.