Researchers who looked closely into the Gardasil HPV vaccine concluded the risks from the vaccine seem to significantly outweigh the as-yet-unproven long-term benefits. 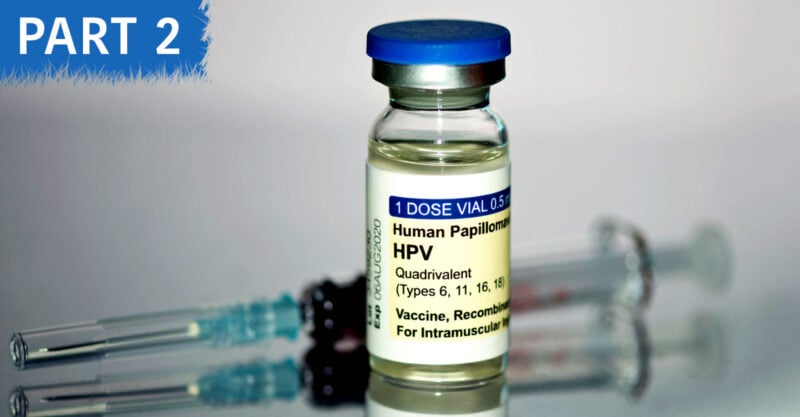 Editor’s Note: This second installment in a multi-part series about the human papillomavirus, or HPV, vaccine examines studies that link the vaccines to increased risk of serious neurological and autoimmune disorders. Read Part 1 here.

In 2020, a group of Danish scientists conducted a systematic review of the overall benefits and harms of HPV vaccines.

Almost all controls were given an active comparator vaccine (typically a hepatitis vaccine with a comparable aluminum-based adjuvant).

Given that the adjuvant is highly immunogenic by design (it is meant to grab the attention of the immune system), this trial design makes it difficult to detect an excess risk with the HPV vaccines.

Without true controls (such as a saline placebo), the real risks of HPV vaccination cannot be accurately assessed.

In the vaccine group, 367 cancers were detected, compared to 490 in the comparator group.

Even though the studies were flawed in their design, at four years post-vaccination, those who had received the HPV vaccines had significantly increased rates of serious nervous system disorders: 49%, as well as general harms totaling 7%.

The serious harms that were judged “definitely associated” with HPV vaccines were postural orthostatic tachycardia syndrome and complex regional pain syndrome. POTS had a nearly twofold increase in the vaccinated group.

By July 2017, only two-thirds of the results from HPV vaccine trials had been published, and only about half the results had been posted, due to manuscript length limitations, reporting bias and confounding journal articles offering a limited view of trial outcomes.

This Danish systematic review compiled data from all the HPV trials to offer a summary of the evidence thus far.

Nevertheless, the investigators acknowledged that despite three years of work, the limitations of their analysis remained. These included reporting bias, incomplete reporting, data fragmentation and limited trial follow-up.

These investigators similarly note that the trials were powered to assess the benefits of HPV vaccination, not rare harms. The degree to which benefits outweigh risks is therefore unknown.

They concluded that future research should carefully evaluate the harms following Gardasil 9 compared to Gardasil because the former contains more than double the virus proteins and aluminum-containing adjuvant than the same dose of Gardasil.

In 2009, the HPV4 vaccine was integrated into the Danish childhood vaccination program. Since then, two large cohort studies on the HPV4 vaccine adverse events have been carried out using the hospital-based healthcare registries of Denmark and Sweden.

The scientists evaluated rate ratios for autoimmune events and found no significant association for 20 out of 23 events.

They found a significant association between the HPV4 vaccine and Bechet’s syndrome (rate ratio 3.37), Raynaud’s disease (1.67) and type 1 diabetes (1.29).

But after further review, they concluded that there was insufficient evidence for a causal association, because of the weakness of the signal and the lack of an underlying mechanism to explain biological plausibility.

In a second large cohort study, the same team expanded their research to more than 3 million Danish and Swedish adult women aged 18 to 44.

After sensitivity analyses, the association between HPV4 vaccination and celiac disease was the most robust finding.

Celiac disease is a condition where a person’s immune system attacks the body’s own gut after eating gluten.

As the graph below shows, the scientists used two risk periods after HPV4 vaccination: the first 180 days and after.

The authors noted that the observed 56% increased risk of celiac disease “was strong, and the increase was strikingly similar in both risk periods after vaccination.”

Celiac disease is underdiagnosed in Denmark.

So one possible explanation is that vaccination visits allow a chance for this and other conditions to be diagnosed and explored.

This explanation suggests that the association between the HPV vaccine and autoimmune disorders may be coincidental.

However, given the lack of any real control groups in these studies, as well as the growing body of scientific literature from countries around the world showing problems with the HPV vaccine, dismissing these safety signals as coincidence seems short-sighted.

The concern about autoimmune disease adverse events has contributed to low HPV vaccination uptake in France.

A 2017 study of over 2.2 million young girls in France found troubling evidence of a link with Guillain-Barré syndrome. GBS is a condition that arises when our own antibodies attack the nerves.

The association appeared to be “particularly marked in the first months following vaccination.”

This finding is corroborated by the pattern of adverse reactions reported worldwide. Data from a large number of case reports document similar serious adverse events associated with Gardasil administration, with nervous system disorders of autoimmune origin being the most frequently reported.

A 2011 U.S. study found that the estimated weekly reporting rate of post-Gardasil GBS within the first six weeks (6.6 per 10,000,000) was higher than in the general population, and higher than post-Menactra and post-influenza vaccinations.

In particular, there was nearly a two-and-a-half to 10 times greater risk of acquiring GBS within six weeks after vaccination, compared to the general population.

Despite the conflicting data in the scientific literature to date, it is clear that the HPV vaccines can cause autoimmune disorders in susceptible people. But how?

Autoimmunity has been reported as a complication of natural infection as well as virus vaccination. This phenomenon has been observed with many viruses, including the Epstein-Barr virus, COVID-19 and HPV.

According to a 2019 study, the HPV vaccine contains epitopes — portions of the virus proteins — that overlap with the human proteins.

This means that if we develop antibodies to those viruses, we may also generate autoantibodies to our own cells, which is the root cause of autoimmune dysfunction.

The study showed that most of the immunoreactive HPV L1 epi­topes are overlapping peptides present in human proteins.

The authors explained that this “unexpected enormous size of the peptide overlap between the HPV epitopes and human proteins” is relevant, and may be why a wide variety of autoimmune diseases have been reported post-HPV vaccination, including ovarian failure, systemic lupus erythematosus, breast cancer and sudden death, among others.

Why some people develop these conditions and others do not is unclear.

The authors suggest that vaccines should target the few peptides that do not overlap with human proteins, but which do overlap with the other HPVs.

Despite this overlap and the potential for causing autoimmune disease, medical doctors usually ignore or dismiss the connection. We are told that these diseases are rare.

The human body has something called immune tolerance. This protects a person’s immune system against attacking itself. Therefore, HPV infection is also “immune tolerated,” which means it lays dormant for some time until it becomes cancerous.

HPV vaccination was actually designed with this immune tolerance in mind.

Given the human body’s built-in defenses against autoimmune conditions, vaccinology requires an immunogenic catalyst to get the body’s attention. This is the job of an adjuvant.

An adjuvant is an ingredient used in a vaccine that the body recognizes as foreign. It is added to vaccines so that the body will mount a stronger immune response.

The idea is that in attacking the adjuvant, the body will also recognize other vaccine ingredients (in this case, purified HPV proteins).

In addition, the antigen dose is much higher than in natural infections and the capsids in the vaccine are directly exposed to systemic immune responses as opposed to the virus staying relatively hidden within the natural barrier of the skin following infection.

The vaccine was well-designed to trigger an immune response, but this advantage may come at a cost: Generating antibodies to HPV proteins through vaccination could, theoretically, set the stage for an autoimmune attack.

A December 2022 Danish and German study was designed to elucidate a possible mechanism of harm.

According to the researchers, in the past several years, case series of suspected vaccination side effects have pointed to three disease entities: POTS, myalgic encephalomyelitis/chronic fatigue syndrome (ME/CFS) and complex regional pain syndrome. These syndromes may be associated with neuroendocrine GPCR antibodies.

From 2011 to 2018, researchers saw 845 patients (839 females, six males) with suspected side effects following the HPV4 vaccine. The control group included vaccinated people without side effects.

Moderate to severe fatigue was recorded in 83.3% of the patients but in none of the controls.

A high prevalence of symptoms, such as dizziness (91%), heart palpitations (71%), nausea (80%) and hyperactive bladder suggested that the patients were experiencing some kind of autonomic dysfunction.

Autonomic dysfunction occurs when the part of the nervous system that controls well-being and balance does not function properly.

Antibodies against the adrenergic ß-2-receptor and muscarinic M-2 receptors were also found significantly higher in patients.

Many of the symptoms, including immune activation and autonomic dysregulation, could be mediated or aggravated by dysregulated autoantibodies against adrenergic receptors and impaired peripheral adrenergic function.

The authors suggested that girls and women with probable side effects of HPV vaccination have symptoms and biological markers compatible with an autoimmune disease closely resembling that seen in ME/CFS.

Interestingly, people who already had HPV infections at some point appeared to be at greater risk for adverse events following vaccination.

The authors noted that “prior disease may precondition some individuals for vaccine-related adverse events.”

They also noted that some of the adverse events resembled long-COVID symptoms.

Academic researcher at the University of British Columbia, Lucija Tomljenovic, and neuroscientist Christopher Shaw, who have closely looked into Gardasil, have argued that the risks from the vaccine seem to significantly outweigh the as-yet-unproven long-term benefits.

In a 2012 comment published in the American Journal of Public Health, they took issue with “incomplete and inaccurate” data and poorly designed trials.

Vaccination is unjustified if the vaccine carries any substantial risk, as healthy teenagers face little to no risk of dying from cervical cancer.

Risk-benefit analyses must be conducted to ascertain the overall balance of benefits and harms on both individual and societal levels.

Reprinted with permission from The Epoch Times. Dr. Yuhong Dong, a medical doctor who also holds a doctorate in infectious diseases in China, is the chief scientific officer and co-founder of a Swiss biotech company and former senior medical scientific expert for antiviral drug development at Novartis Pharma in Switzerland.

If you or your child suffered harm after receiving the Gardasil HPV vaccine, you may have a legal claim. Please visit Wisner Baum for a free case evaluation. Click here to watch a Gardasil litigation update interview with Wisner Baum Senior Partner Bijan Esfandiari.