As of Oct. 26, at least 59 people had died and more than 1,200 reported adverse reactions following the rollout of the flu vaccine campaign. 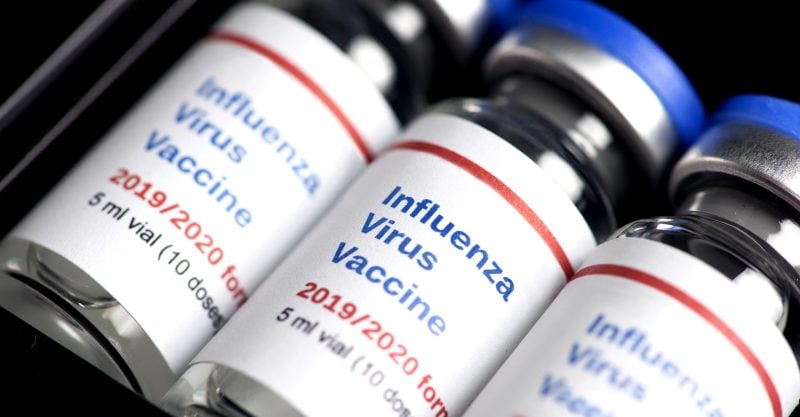 Every year, the Centers for Disease Control and Prevention (CDC) attempts to foist dangerous and ineffective flu shots on every American who is six months of age or older. Last flu season, though influenza vaccines reached nearly two-thirds (63.8%) of children (through age 17), more than half of adults (51.6%) declined the jab. The CDC’s goal is 70% coverage for both children and adults.

This year, officials have been only too willing to use COVID-19 as an excuse not just for more aggressive promotion of flu vaccines but for out-and-out mandates, citing the “looming threat” of concurrent influenza and SARS-CoV-2 epidemics. In late July, the University of California (UC) was the first out of the gate; though a Children’s Health Defense lawsuit soon forced some revisions to the executive order, all students, faculty and staff who are “living, learning, or working on premises” are required to get a flu vaccine unless they can persuade UC’s de facto “religious inquisition courts” that they are entitled to religious accommodation.

In August, Massachusetts pointed to the similarity of flu and COVID-19 symptoms as its rationale for requiring all children six months of age and up to get an influenza vaccine if attending child care, preschool or K-12, becoming the first state to mandate flu shots for school attendance; the state’s new order also mandates the vaccines for anyone under age 30 attending college or university. Other public universities have followed suit, including the University of Kentucky, Indiana University and the University of Tennessee, as well as some private universities.

Before any more U.S. officials or institutions blithely impose mandates, they might want to consider the current headlines coming out of South Korea. As of Oct. 26, at least 59 people had died (with the death count increasing by 13 over a two-day period) following the Asian nation’s rollout of an assertive influenza vaccination campaign, and the country had received more than 1,200 reports of adverse reactions. Although most of the fatalities appear to have been in older adults, the ranks of the deceased also include a 17-year-old boy.

Children’s Health Defense (CHD) has previously described post-flu-vaccine deaths in children ranging in age from 3 to 14 and in young adults in their twenties and thirties. CHD has also noted the relationship between thimerosal (still present in many influenza vaccines) and cardiovascular damage — a concerning association given that sudden cardiac death is on the rise in adolescents and young adults.

As in the U.S., South Korea has been relying on stated coronavirus concerns to justify its strong push for influenza vaccination, despite only 457 deaths thus far attributed to COVID-19. In September, after having ordered 20% more flu vaccines than usual to keep the feared “twindemic” at bay, South Korea had to throw away five million improperly stored doses. Yet despite the deaths and the disturbing hiccups with vaccine storage — and ignoring pleas by the 130,000-member Korean Medical Association to take a pause — South Korea’s public health authorities pledge that they will “press on” with their vaccination efforts. Singapore, meanwhile, has chosen a more precautionary approach, withdrawing the two influenza vaccine brands in question and carefully “monitoring the situation.” Italy made a similar choice in 2014 when it suspended a Novartis influenza vaccine after 13 vaccinated individuals died.

All over the world, it is a common tactic for the officials and companies promoting flu shots to deny that the vaccines can be fatal and to insist that the benefits outweigh the risks. During the deadly events of 2014 in Italy, Novartis claimed that because the target population was elderly and “vulnerable to sudden clinical events independent of vaccination,” the deaths were “only coincidental.”

In 2019, a startling 1,531 elderly South Koreans died within seven days of getting a flu vaccine, but the government concluded that there was no link between the two events; it has made the same assertion about this year’s deaths. In fact, the agency equivalent to the CDC in South Korea (the KDCA) makes the circular argument that there is no current cause for concern precisely because “the latest number of deaths following the flu vaccination is not greater than previous years.” While admitting to two potentially fatal side effects of influenza vaccination — anaphylaxis and Guillain-Barré syndrome — the KDCA states that “no such case has occurred among the deaths after vaccination this year,” essentially implying that absent either an immediate allergic reaction or a protracted autoimmune reaction, the vaccine cannot possibly be responsible for any deaths.

It is worth remembering that in the U.S., injuries and deaths following influenza vaccination are responsible for more than seven out of 10 petitions filed with the National Vaccine Injury Compensation Program and have resulted in payouts averaging $60 million per year over a 15-year period. The CDC also acknowledges that flu-vaccine-related deaths and other serious adverse events have been reported to the Vaccine Adverse Event Reporting System (VAERS). The package insert for the influenza vaccine Flublok (marketed to Americans age 18 or older) notes deaths within the six months following vaccination but states that the manufacturer considers all of the deaths unrelated to the vaccine. All of the influenza vaccines marketed in the U.S. list numerous serious adverse events in the package inserts.

Anyone with a modicum of familiarity with the influenza vaccine literature knows that the vaccines are far from effective, failing to “significantly reduce medically attended influenza illness.” Increasingly, they also appear to be downright counterproductive. For example, studies show that getting vaccinated against influenza increases recipients’ susceptibility to other severe respiratory viruses, including coronaviruses, and also to other strains of influenza. One study showed that vaccinated 35-54 year olds had a more than fourfold increased risk of influenza illness compared with same-age unvaccinated individuals. Moreover, in individuals who get flu vaccines every year, the prior years’ shots diminish or “blunt” the vaccines’ already low effectiveness.

In addition to South Korea’s cautionary tale, there are other reasons to question the flu shot “hard sell” this year. Italian physicians have noted, for example, that many of the elderly victims of COVID-19 last winter had been given a new type of flu vaccine as well as a hepatitis C vaccine weeks before falling ill. As journalist Jon Rappoport points out, “ANY vaccines given to people whose immune systems are already weakened — such as the elderly and infirm — are automatically dangerous and life-threatening at a high level. Two vaccines within the space of a few months, one of which has added new viral material and/or a variety of new cellular and genetic debris — plus the usual toxic chemicals — and you have a potential recipe for disaster.”

The two vaccines causing problems in South Korea include SKYCellflu Quadrivalent (a cell-culture vaccine made by South Korean manufacturer SK Chemicals) and VaxigripTetra, manufactured by Sanofi. The negative publicity for SKYCellflu and VaxigripTetra cannot be welcome news to either manufacturer. SK Chemicals brags about having “succeeded in commercializing the world’s first cell-culture influenza vaccine for children and adolescents between the ages of six months to 18 years as well as the world’s second for adults” and implies that a lot is riding on its “world-class vaccine’s” success as the company prepares to “compete on an international level.” The appeal of cell-culture methods for an influenza vaccine manufacturer is that the process cuts production time in half, from six to three months. VaxigripTetra is a quadrivalent “split-virion” vaccine (meaning that it incorporates pieces of virus rather than whole virus) approved for the European market in 2016 for ages three and up. Among other ingredients, Sanofi’s vaccine contains formaldehyde, neomycin and the surfactant octoxynol 9.

Ironically, the World Health Organization and the CDC have recently described a “creeping trend across the world” of missing-in-action influenza viruses. In September, the CDC reported decreased influenza activity in the U.S. and globally, and in August, Harvard authors reported the same “pattern of decreased influenza incidence in 2020” in the Journal of the American Medical Association. The Harvard authors prefer to credit the subdued presence of influenza to the “nonpharmacologic interventions” forced on the world’s citizenry this year (such as face masks and “restrictions on movement”), while some other scientists are speculating that coronavirus infection, with or without symptoms, could have “elbowed out” the flu. All of these “experts,” of course, warn against relaxing the push for influenza vaccination — but perhaps it is a good year for those with common sense to take a pass on listening to them.