A three-judge panel on Jan. 4 revived a lawsuit against five pharma companies accused of helping finance terror attacks against U.S. service members in Iraq during the “War on Terror.” 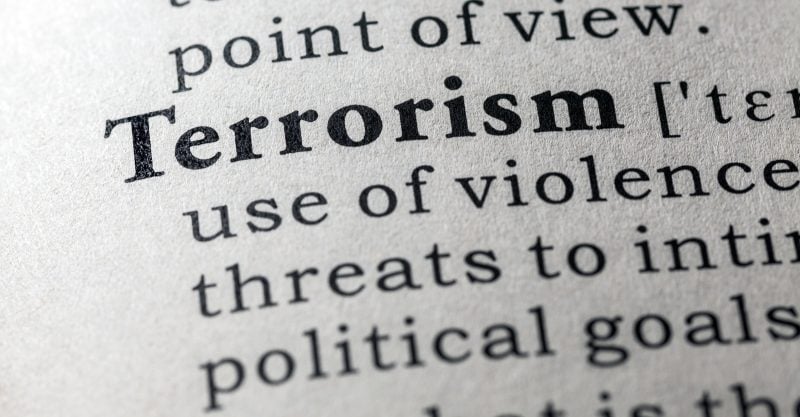 A 2017 lawsuit alleging five pharmaceutical companies helped finance terror attacks against U.S. service members and other Americans in Iraq during the “War on Terror” was unanimously reinstated and remanded by a three-judge panel of the D.C. Court of Appeals.

The lawsuit against the five companies in question — Pfizer, AstraZeneca, Johnson & Johnson, Roche and GE Healthcare — was dismissed in July 2020 by a federal district court in Washington, D.C. before being reinstated last week.

The lawsuit claims the five companies regularly paid bribes, including free drugs and medical devices, to officials in Iraq’s Ministry of Health between 2005 and 2011, in their efforts to secure drug contracts.

In turn, the suit alleges, these companies’ contracts with the Iraqi health ministry helped “fund terrorism” perpetrated by a Shiite militia that killed Americans during that period.

The militia in question, Jaysh al-Mahdi, or the “Mahdi Army,” maintained control of the health ministry at that time.

The amended lawsuit was filed on behalf of 395 Americans who were killed or injured in Iraq during the six-year period.

The plaintiffs seek damages under the federal Anti-Terrorism Act (ATA), which states plaintiffs must demonstrate the terror attacks were conducted by an organization formally designated as a terrorist group by the U.S. government.

While the Mahdi Army has not been formally classified as a terrorist group, the lawsuit alleges the army’s attacks carried out in Iraq were “planned and organized” by Hezbollah, which the U.S. in 1997 labeled a terror group.

The initial lawsuit also prompted an investigation of the pharmaceutical companies by the U.S. Department of Justice (DOJ), in 2018.

An alleged web of corruption and kickbacks

The allegations made in the lawsuit are based on information provided by 12 confidential witnesses, public and private reports, contracts, email communications and documents published by WikiLeaks.

Included in the lawsuit are 27 pages of itemized deaths and injuries sustained by U.S. service members in attacks by the Mahdi Army between 2005 and 2009, and claims of pain and suffering submitted by their family members and relatives.

One of the main planks of the lawsuit pertains to bribes and kickbacks the five companies named in the suit are alleged to have provided to the terrorists who controlled the Iraqi health ministry between 2005 and 2011.

The lawsuit alleges the five companies obtained contracts with the ministry through the illicit payments, which were then used to “aid and abet” terror attacks against Americans.

The central argument put forth in the original lawsuit is that the companies must have been aware that Iraq’s health ministry operated as a de facto terrorist organization, and this knowledge should have resulted in an insistence, on the part of the five companies, that any contracts with the ministry be structured to reflect this knowledge and to guard against potential corruption and misuse of funds.

This point is crucial, as it is illegal under U.S. law to knowingly fund terror groups.

In the aftermath of the U.S. invasion of Iraq in 2003, the procurement budget for the Iraqi health ministry skyrocketed, from $16 million in 2003 to approximately $1 billion in 2004, due to U.S. financial assistance.

It was in 2004, according to the lawsuit, that the Mahdi Army took control of the Iraqi health ministry, at a time when various political factions in the country took over government ministries as the U.S. devolved power back to the Iraqis.

Having taken over the ministry, the Mahdi Army allegedly used it as a vehicle for financing terrorist acts, using local agents to deliver cash kickbacks to terrorists on the ground and selling medical supplies “off the books” on the black market, to further fund terror operations.

Indeed, many of the officials employed in the ministry at the time are said in the lawsuit to have been senior members of the Mahdi Army. This group maintained strongholds in parts of the Iraqi capital, Baghdad and in the south of the country, vying for control of cities such as Basra and Amara.

The Mahdi Army, in turn, was loyal to Moktada al-Sadr, a political figure described by The New York Times as a “firebrand” cleric who operated death squads targeting Iraqi Sunnis and Americans.

The group emerged in 2003, following the overthrow of Saddam Hussein, operating as a security guarantor in neighborhoods dominated by al-Sadr. In 2004, the Mahdi Army fought U.S. forces in Najaf and Sadr City.

According to the lawsuit, the pharmaceutical companies financially supported the Mahdi Army in two ways. One way was through bribes that were paid in the form of “discounts” — which were offered by the companies not through reduced prices, but through the provision of “free” medical goods, often equalling up to 20% of the total value of the contract.

These bribes, the suit alleges, amounted to millions of dollars annually. It is noted that this form of bribery is commonplace in the Middle East because, unlike direct cash transfers, companies can claim these “free” goods were “charitable” contributions, in the event such transactions are discovered.

Another alleged means of financial support on the part of the five companies was through the hiring of local intermediaries to register their companies, receive government approval for the use of their products domestically, and negotiate contracts.

The lawsuit describes the payments made to these intermediaries as “thinly disguised bribes.”

Between 2004 and 2013, the companies in question also allegedly operated a “slush fund,” under the guise of paying for after-sales support and other services related to the products they sold.

These services were “illusory” and the funds instead went into the pockets of corrupt health ministry officials and local agents, the plaintiffs allege.

Goods said to have been sold to the Iraqi health ministry during this period include GE electrocardiogram machines; Johnson & Johnson catheters and anti-epilepsy drugs; Depo-Provera, a birth control shot produced by Pfizer; Seroquel, an anti-psychotic medication produced by AstraZeneca; and Herceptin, a breast cancer drug produced by Roche.

As a result of the “commissions” and “free” goods provided to members of the Mahdi Army, the militia became known among U.S. officials as the “Pill Army,” as its fighters often received prescription medications as medicines. These drugs could then be resold.

An August 2007 draft report prepared by the U.S. Embassy in Baghdad accused the Iraqi health ministry of “operating a pharmaceutical diversion scheme” and operating “openly under the control of the Mahdi Army.”

The lawsuit alleges bribes facilitated the Mahdi Army’s acquisition of weapons, as well as training and logistical support.

Indeed, the lawsuit claims the Iraqi health ministry and the Mahdi Army were, at the time, essentially interchangeable, and by late 2004, the ministry was too dangerous for Americans to enter and “functioned more as a terrorist apparatus than a health organization,” with headquarters, as well as hospitals, plastered with posters of al-Sadr captioned with slogans declaring “death to America.”

Hospitals and ambulances are said to have been utilized as part of the terrorist acts perpetrated by the Mahdi Army, while the ministry is said to have employed approximately 15,000 armed men who were known as the “Facilities Protection Service,” using ministry supplies, such as vehicles and uniforms, for terrorism and other criminal activities, including kidnapping.

Numerous such incidents are detailed in the lawsuit.

In April 2006, for instance, U.S. forces arrested seven bodyguards of then-health minister Ali al-Shemari after a Sunni health official entered the ministry on the pretext of being interviewed for a ministerial post, never to be seen again.

Mass kidnappings repeatedly carried out in Baghdad in 2006 – 2007 were also blamed on the “Facilities Protection Service,” with victims frequently delivered to the health ministry’s basement for torture and, sometimes, murder.

The deputy health minister at the time, Hakim al-Zamili, was also arrested by U.S. troops at the time, charged in the disappearance of another deputy minister, Ammar al-Saffar, whose body was never located.

A report by global intelligence company Stratfor accused al-Zamili of “selling health services and equipment in return for millions of dollars that he later funneled to Shiite militias.”

In other incidents, mortars were fired at U.S. forces, and at Sunni neighborhoods, directly from the roof of the health ministry.

The violence originating from the health ministry was such that a 2006 State Department cable available on WikiLeaks described it as “The Ministry of Weapons Transportation.”

In reinstating the lawsuit, the D.C. Circuit judges noted:

“The complaint describes how Jaysh al-Mahdi controlled the ministry and used it as a terrorist headquarters.

“Accepting those allegations, defendants’ dealings with the ministry were equivalent to dealing with the terrorist organization directly. The ministry was therefore not an independent intermediary that broke the chain of causation, but a front for Jaysh al-Mahdi.”

Pharma companies will have to respond to reinstated suit

The lawsuit was filed following an investigation by the Washington, D.C. law firms of Sparciano & Andreson and Kellogg, Hasen, Todd, Figel & Frederick.

In the lawsuit, the firms allege the five named companies were aware their business practices were inappropriate and potentially illegal, based on settlements they reached previously for prior accusations where identical tactics and even some of the same intermediaries were used as part of a United Nations-sponsored oil-for-food program prior to the 2003 Iraq invasion.

After the reinstatement of the lawsuit, the companies in question issued a joint statement denying any wrongdoing.

In 2018, the DOJ launched a separate investigation against the companies, which came to light when AstraZeneca mentioned the lawsuit in a 2018 securities filing.

It is unclear what the current status of the DOJ investigation is, or why the lawsuit was reinstated, a year-and-a-half after its initial dismissal.

Settlements in cases of alleged overseas corruption are not new for at least some of the companies named in the lawsuit.

For instance, in 2011, Johnson & Johnson agreed to a $70 million settlement stemming from civil and criminal charges that its subsidiaries had paid bribes to officials in countries such as Greece, Poland and Romania, and as part of the Iraqi oil-for-food program.

And in 2010, GE paid a settlement exceeding $23 million to settle charges levied by the U.S. Securities and Exchange Commission alleging the company paid kickbacks in the oil-for-food program.