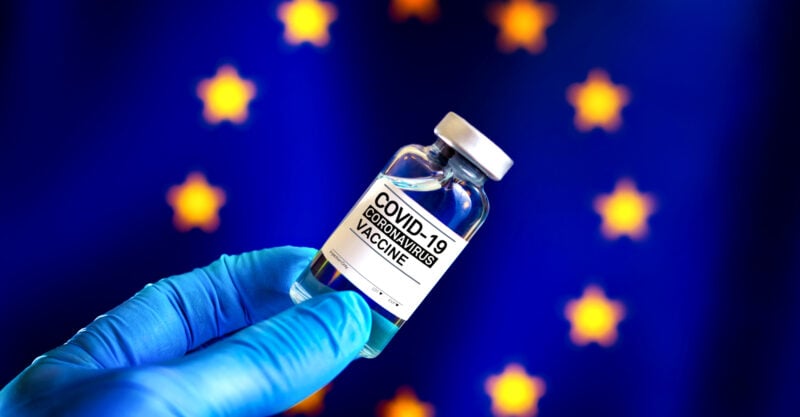 The EMA is the European equivalent of the U.S. Food and Drug Administration (FDA).

The documents, first reported on by Trial Site News, include emails, a PowerPoint presentation and a confidential Pfizer report from the Nov. 10-25, 2020, time period —  just weeks before European, U.K. and U.S. regulators authorized the vaccine for emergency use.

Key revelations from the documents include:

A Nov. 16, 2020, email from Marco Cavaleri, then head of the EMA’s biological health threats and vaccines strategy, stated that “[Alex] Azar and US GOV [sic]” had “pushed hard” to “rush into EUA [Emergency Use Authorization].”

Azar at the time was secretary of the U.S. Department of Health and Human Services, which oversees the FDA.

In a Nov. 19, 2020, email, Noel Wathion, then deputy executive director of the EMA, referenced a “TC” — shorthand for teleconference — “with the commissioner,” referring to European Commissioner Ursula von der Leyen.

During the call, which Wathion described as “rather tense, at times even a bit unpleasant,” von der Leyen warned the EMA what might happen “if the expectations are not being met” to quickly issue a CMA [Conditional Marketing Authorization] for the Pfizer-BioNTech vaccine, “irrespective if such expectations are realistic or not.”

In the same email, Wathion wrote:

“The political fall-out seems to be too high, even if the ‘technical level’ … could defend such a delay in order to make the outcome of the scientific review as robust as possible. …

“Although we know that whatever we do (speeding up the process to align as much as possible with the ‘approval’ timing by FDA/MHRA [Medicines and Healthcare products Regulatory Agency] versus taking the time needed to have robust assurance in particular as regards CMC [Chemistry, Manufacturing and Controls guidelines] and safety) EMA will have a very big challenge addressing questions and criticism from various parties … in case of a delay of several weeks.”

The “various parties” Wathion referenced included the European Commission, the European Parliament, the media and the general public.

Wathion went on to argue that “CMC, responsibility and accountability are certainly elements to be considered in my view.”

In a later email, dated Nov. 22, 2020, Wathion further revealed the pressure the agency was facing to issue a CMA for the Pfizer-BioNTech vaccine, writing:

“The likelihood that FDA (and also MHRA) will issue an EUA before a CMA is granted is extremely high. So we have to prepare for this.”

However, Wathion expressed concerns in the same email that such preparation might come at the expense of a proper scientific assessment of the Pfizer vaccine.

“We are speeding up as much as possible but we also need to make sure that our scientific assessment is as robust as possible,” Wathion wrote.

Wathion also said, “the lay public and the media will not understand the nuance” between an EUA or CMA on the one hand, and full authorization on the other. “For them, an ‘authorization’ is an authorization.”

In fact, the media often refer to the Pfizer, Moderna and Johnson & Johnson COVID-19 vaccines as “approved” when in fact, in the U.S., they are being administered under EUA.

Wathion suggested it was necessary “to address this going from damage limitation to proactive expectation management,” in reference to the possibility that U.S. and U.K. regulators would issue an EUA before the EMA issued its own CMA.

Did concerns about integrity, consistency of vaccine batches lead to lowered standards?

Other leaked documents reveal discrepancies in the consistency of the Pfizer vaccine batches and other safety concerns.

A Nov. 10, 2020, email from Cavaleri revealed the FDA was, at that time, aware of “some issues on CMC to be sorted out,” and concerns that “CMC will end up being the difficult bit.”

In the same email, he said the FDA may grant its EUA by Christmas 2020, and inquired whether the EMA could grant its own CMA “at the same time.”

The “issues” Cavaleri referred to pertained to a significant discrepancy in the mRNA integrity between the clinical batches and the proposed commercial batches of the Pfizer-BioNTech vaccine.

In a Nov. 23, 2020, email Evdokia Korakianiti, a scientific administrator with the EMA, addressed those issues, writing:

“Issue: A significant difference in %RNA integrity/truncated species has been observed between the clinical batches (~78% mRNA integrity) based on which the Interim analysis was performed and the proposed commercial batches (~55%).

“The company claims that the efficacy of the drug product is dependent on the expression of the delivered RNA, which requires a sufficiently intact RNA molecule.”

This had as-yet-unspecified implications for the safety of the product, as Korakianiti later explained in the same message:

“The root cause for the lower %RNA integrity at [sic] commercial batches has not yet been identified.

“The potential implications of this RNA integrity loss in commercial batches compared to clinical ones in terms of both safety and efficacy are yet to be defined.”

A confidential 43-page Pfizer report, also part of the leaked documents, provided further insight into the significance of this discrepancy.

According to the report, Acuitas Therapeutics, the company that developed the lipid nanoparticle platform used by the Pfizer-BioNTech and Moderna COVID-19 vaccines, had set “a minimum threshold” of mRNA integrity of “approximately 70%.”

“The efficacy of the product is dependent on expression of the delivered RNA, which requires a sufficiently intact RNA molecule.”

In a Nov. 24, 2020, reply to Korakianiti’s email, Veronika Jekerle, head of the EMA’s pharmacy quality office, described these concerns as part of “a number of major concerns [that] remain that impact the benefit/risk of the vaccine (efficacy/safety).”

Jekerle said, “these concerns are shared by most member states” of the EU.

However, Jekerle suggested “an approval by the end of the year could potentially be possible if these concerns + GMP [good manufacturing practice] will be resolved.”

In an apparent contradiction, and perhaps revealing a shifting stance on the part of the EMA, a Nov. 23, 2020, email by Cavaleri stated: “…the issue on the mRNA content [is] not perceived as major.”

The same email also strongly implied the FDA felt similarly, as Cavaleri wrote there was “no major interest from [the] FDA.”

A Nov. 25, 2020, email from Jekerle further confirmed the lack of interest on the part of several regulators, including the FDA, regarding the mRNA integrity issue.

“FDA/HC/EMA agreed that alignment on specifications %B mRNA integrity are key in order to avoid that one regions [sic] gets all the suboptimal material … specifications should be clinically qualified.”

The above passage appears to indicate that specific vaccine batches would be “suboptimal” as a result of this discrepancy in mRNA integrity.

Jekerle’s Nov. 25, 2020, email also revealed further potential safety concerns — namely, that the “applicant has shared with FDA and us/MHRA only today an issue with visible particles in the DP [drug product] (appears to be lipid nanoparticle components).”

In other words, Pfizer, the “applicant,” revealed the concerns to regulators only on Nov. 25, 2020 — shortly before U.S., U.K. and EU regulators granted Pfizer the emergency and conditional approvals.

For instance, the MHRA approved the Pfizer vaccine on Dec. 2, 2020.

Concerns about mRNA integrity discrepancies appear to have been overcome, not by altering the product under consideration, but by changing the acceptable RNA integrity specification.

A leaked PowerPoint presentation that refers to a Nov. 26, 2020, meeting between the EMA and Pfizer, which took place just one day after Jekerle’s email, states:

These changes were made despite a mention in the same slide of “uncertainties as regards product safety and efficacy of the commercial product.”

Another slide in the same presentation stated:

“Truncated and modified RNA species should be regarded as product-related impurities.

“In addition, the possibility of translated proteins other than the intended spike protein (S1S2), resulting from truncated and/or modified mRNA species should be addressed and relevant protein characterization data for predominant species should be provided, if available.” 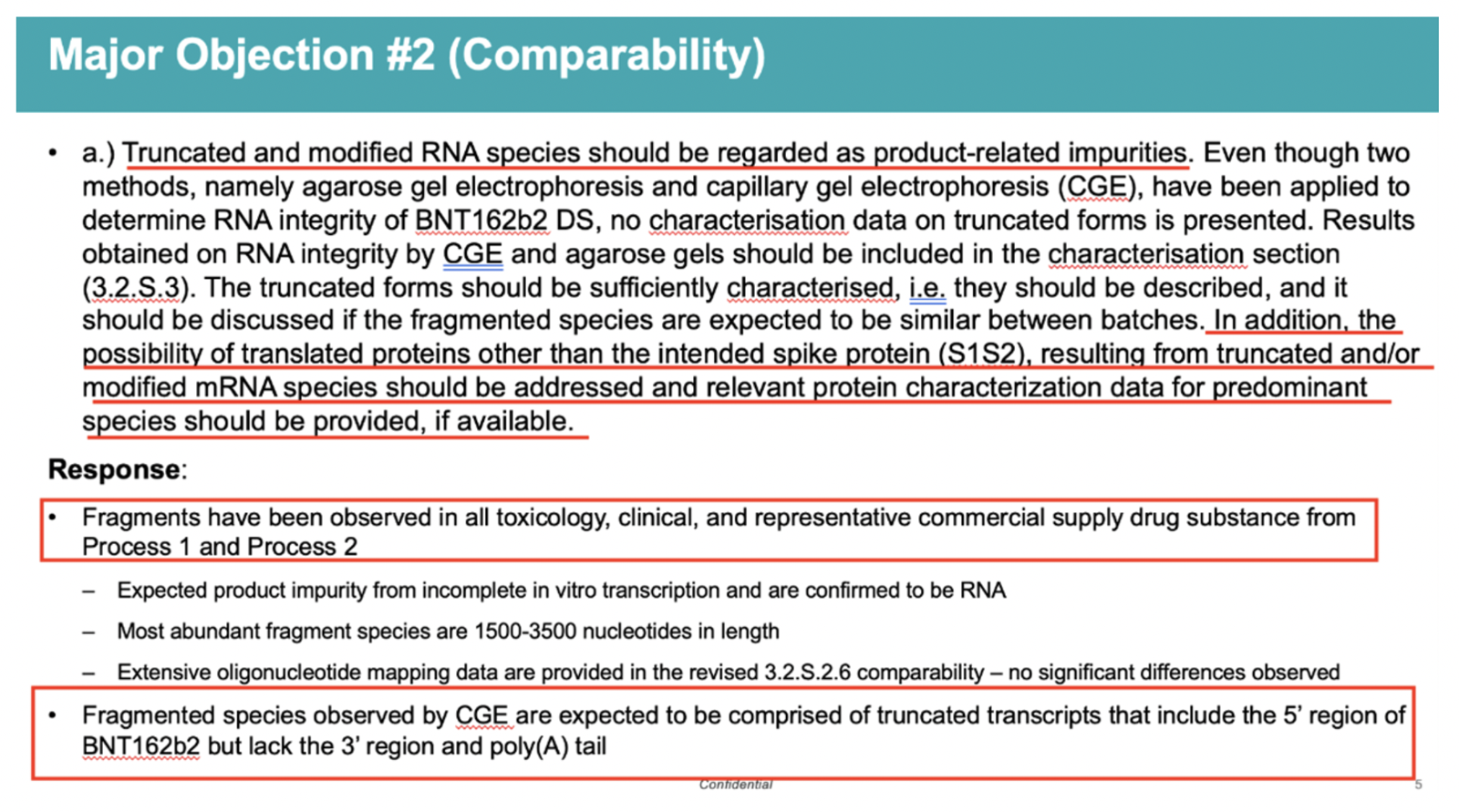 The leaked documents revealed intense lobbying from high-level pharmaceutical and political figures in favor of a quick approval of the vaccine, despite the sentiment among EMA experts that a more robust scientific assessment of the Pfizer-BioNTech vaccine was needed.

For example, another email from Cavaleri explicitly mentions Pfizer’s direct lobbying of Dr. Peter Marks, the director of the FDA’s Center for Biologics Evaluation and Research.

The same email mentioned that “colleagues” at the EMA “are pushing hard to compress [the] review timeframe” for Pfizer’s vaccine.

According to Trial Site News, such lobbying “could be interpreted as highly controversial.”

“Pfizer’s apparent access into the federal watchdog raises significant questions at the least,” Trial Site News reported, and “introduces the possibility for disturbing entanglements between industry and a purportedly independent, scientific federal agency.”

Trial Site News also referred to calls, in February 2022, on the part of independent members of the European Parliament for von der Leyen to resign, following revelations she had exchanged private text messages with Bourla.

While “only a small portion of these texts were ever disclosed,” Trial Site News said, the ones that were released “revealed her negotiating portions of a European-wide vaccine deal, unilaterally with Bourla, via a series of texts!”